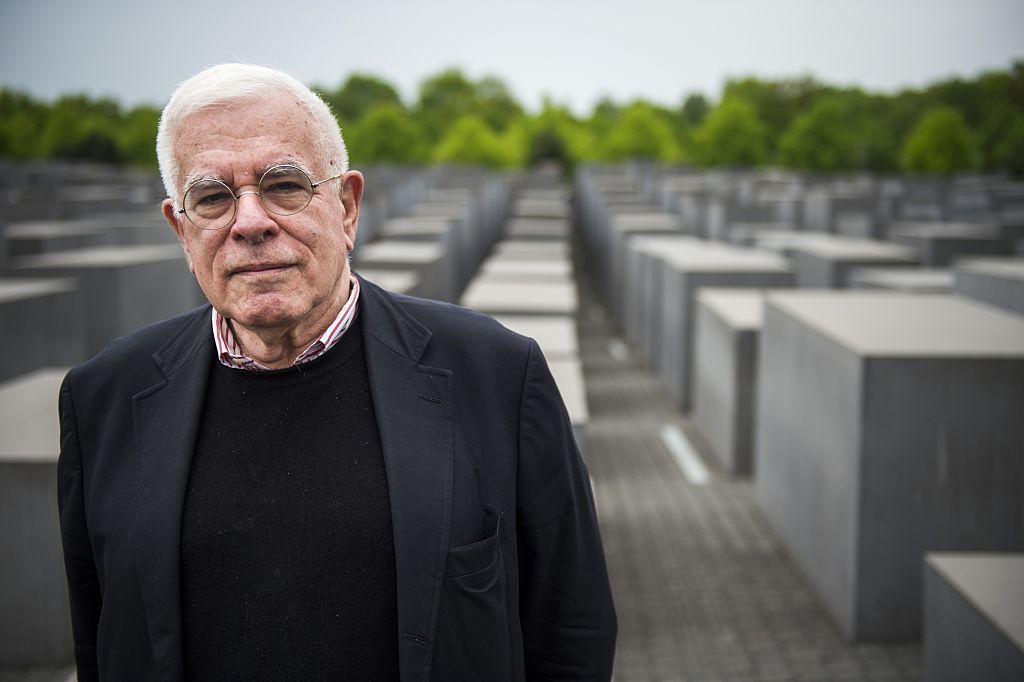 “Architecture, I believe, is necessary to mark collective memory.” One of the leading contemporary American architects, Peter Eisenman, here shares the thoughts that went into building the Holocaust Memorial in Berlin, and how he sought to transform a feeling of “being lost in space in time” into the memorial. Read less …

Eisenman shares how he didn’t want to use Jewish symbolism in the memorial, but rather have “a field of otherness, where people understand that to have been a Jew in Germany was ‘other’. And what was it like to be ‘other’ in space in time? And that’s how we came up with the field.” It had nothing to do with the Holocaust symbolically, he explains, but was inspired by his conversation with a woman, who had survived Auschwitz. Upon being separated from her mother, she had had a terrifying encounter with Josef Mengele, which made her feel alone and lost in space: “I wanted that feeling of being lost in space to inhabit the memorial.” Getting to what he describes as “the popular level” was also important to Eisenman – having kids play in the memorial, not realizing its connotations, and then going home and sharing their experience with their grandparent, who have an entirely different approach to it: “They feel it, but they don’t know what it is.” In connection to this, Eisenman emphasizes that the memorial is now a public space, and should be allowed to be precisely that: “It’s not about guilt… I don’t feel that the German volk today are guilty, no more guilty than we are voting Trump in.” Finally, Eisenman comments on the connection between architecture and memory: “Architecture collects collective memory.”

Peter Eisenman (b. 1932) is an American architect, whose architecture is often characterized as Deconstructivist. Eisenman rose to fame in the late 1960s as part of the New York Five, a group that shared an interest in the purity of architectural form and besides Eisenman included Charles Gwathmey, John Hejduk, Richard Meier, and Michael Graves. Among his work are House VI in Cornwall, Wexner Center for the Arts in Columbus, Memorial to the Murdered Jews of Europe (The Holocaust Memorial) in Berlin, and the City of Culture of Galicia in Santiago de Compostela. Eisenman is the recipient of numerous awards including the AIA/ACSA Topaz Medallion for Excellence in Architectural Education (2015), the 2007 American Institute of Architects’ National Honor Award for Design, the 2004 Golden Lion for Lifetime Achievement in Architecture, Royal Institute of British Architects Jencks Award for Architectural Theory (2004), and the American Institute of Architects National Honour Award (1991, 1993, 1988).

The Holocaust Memorial (also known as the Memorial to the Murdered Jews of Europe) opened in Berlin in 2005. It is constructed of 2,711 grey concrete slabs of different heights, arranged on a 19,000 square metre site. The memorial is on a slight slope, and its wave-like form is different wherever you stand.

Peter Eisenman was interviewed by Marc-Christoph Wagner at his studio in New York City in January 2020.