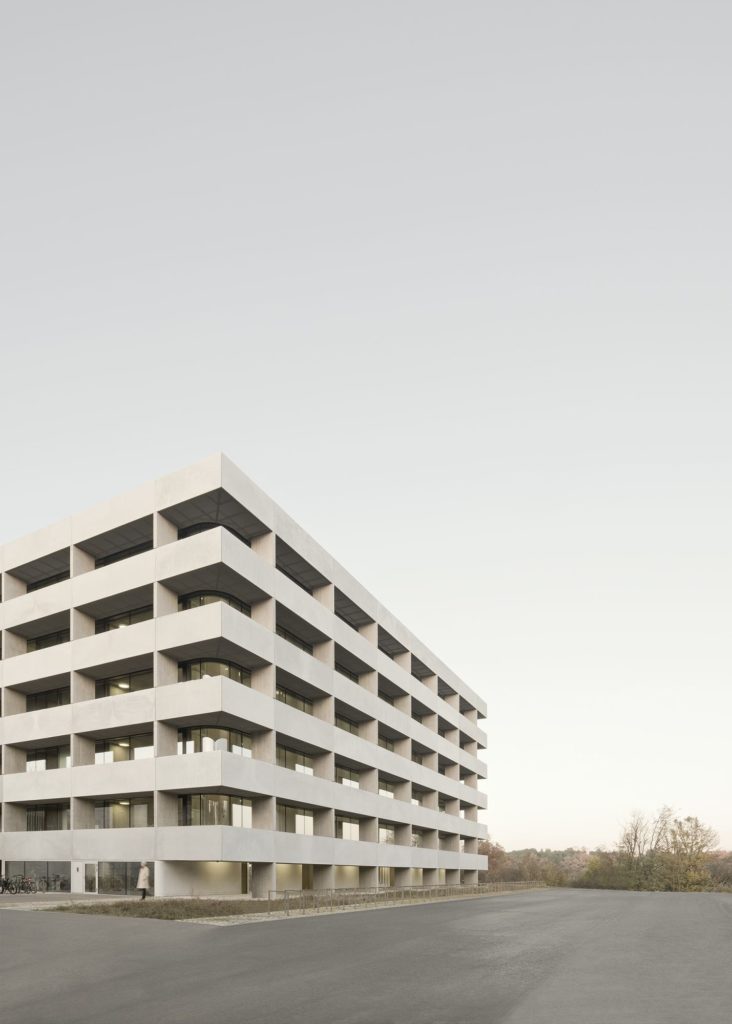 As the winning entry of an international competition, the building is a state of the art facility for interdisciplinary research into solutions for environmental problems, particularly water, soil and the atmosphere. With its prominent location, the building complements the campus’ urban layout and underlines the Centre’s scientific importance.

The Morgenstelle Campus belongs to the Eberhard Karls University, located on a hill overseeing the valley and the city of Tübingen. Initially designed in the 1960s, the Campus will be extended by constructing four new buildings around a central square, according to the urban concept by Harris + Kurrle Architekten. Geo- and Environmental Centre is a part of this planned southward expansion bringing together the previously scattered departments of Earth Sciences Faculty and the Institute for Groundwater. The combined facility aims to stimulate exchange between individual departments in the building and other natural science faculties located in the area.
Partially recessed into the site’s slope, the building is a low elongated structure spreading over six floors. Within its 100 by 50 m footprint, it encloses two courtyards laid out on different levels to cope with the inclined topography of the site. The southern side of the building opens towards the city of Tübingen, forming the face of Morgenstelle Campus, while the northern facade creates a clear spatial boundary of the campus square and marks the main entrance of the building.

Geo- and Environmental Centre combines public teaching and study areas with specialised research and workspaces. Conveniently located communal facilities like the auditorium and seminar rooms in the north are easily reached from the campus square. Meanwhile, the labs and workshops face east, with offices lining the west and south. Direct sightlines from the square through the open northern façade pull the visitors into a sizeable double-height reception hall. The continuation of the same robust materials reinforces the connection with the surroundings, contrasted by the warmth of the dark walnut detailing. As the building’s hub for meeting and interaction, the entrance hall is peppered with student workspaces providing views to the teaching areas through glazed interior walls. A free-standing sculptural staircase linking the upper and lower levels brings the views upwards, where open galleries provide routes deeper into the building.
The hall’s hidden feature is the precarious kunst am bau by local artist Martin Bruno Schmid who challenges the building’s statics by splitting the supporting pillars lengthways. A vertical slit through the seven and a half meter high columns reveals their interior, challenging the limits of the structure’s load-bearing capacity.

Guided by demands for efficiency of the layout and future flexibility, the laboratories and workshops are accommodated in two compact blocks in the eastern section of the building. They are distributed across all six levels based on the principle ‘from coarse to fine’, starting with the workshops for rock preparation on the lowest level and the cleanrooms at the top.
Seen from afar, the building is like a block of stone with deep ridges that expose a glazed volume. Upon closer inspection, the facade reveals to be wrapped in horizontal rings matching the character of existing campus buildings.
Measuring 2 metres in height and depth, the seemingly solid bands are actually hollow structures clad in prefabricated concrete elements and gratings, enabling access to ventilation and maintenance. The bands also provide sun shading and light control, rendering external sun blinds superfluous. Specialised activities of the Centre are therefore on display more clearly, making a visible mark on the Campus especially when the building lights up at night. The long uninterrupted views are made possible because the façade bands are held up by shear walls detached from the continuous mullion-free glass. These concrete fins serve as external load-bearing supports, allowing interior layout flexibility.

The offices and meeting rooms linked via internal corridors line the north, west and south façades, enclosing the two inner patios. With highly detailed stone-clad facades and neat rows of windows, the character of the courtyards is evocative of Tübingen’s historic centre where the old offices were previously located. In this way, a familiar domestic environment for the inner offices compensates for the landscape view available to the ones on the outer façades.
A perpendicular axis between the courtyards connects the laboratory blocks to the offices and houses all the functional areas needed for day-to-day operation. Located at the heart of the building, it forms a space for GUZ staff to socialise and an essential spatial orientation point between the patios. The surrounding grassy slopes are visible through a secluded and intimate southern courtyard, while the northern one looks out over the entrance hall towards the campus square and links with the open public spaces.
_