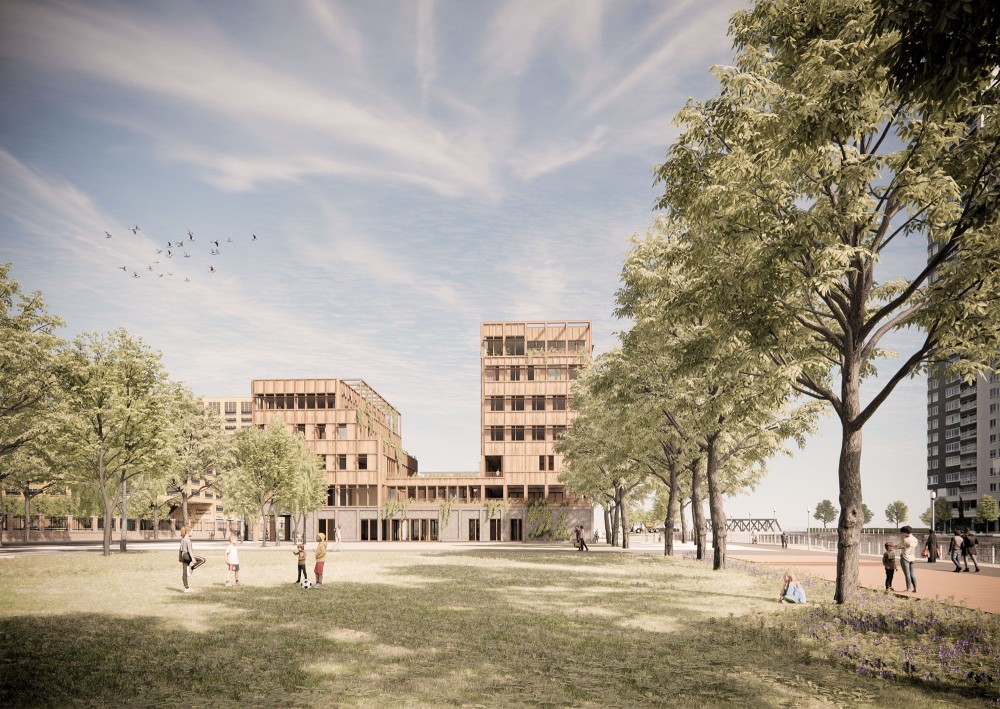 Commissioned by the Société d’Aménagement Urbain (SAU), BOGDAN & VAN BROECK and BC architects & studies are designing a much-needed frontline care centre around the canal, on Avenue du Port in Brussels, in co-existence with the continuation of the port activity. The result is a ‘well-oiled machine’ for the Port and an open building for the non-profit TRANSIT, offering 24/7 social control and maximum privacy for society’s most vulnerable people. Here, more than ever, architecture becomes an instrument of social justice.

Far from being an institution marked by unending corridors and a lack of character, the project is seen as the juxtaposition of several ‘houses’.

An inn on the banks of the canal
The integrated centre for drug users is a twenty-first-century inn: an urban place comprising temporary residences, spaces dedicated to human well-being and community meetings.
Far from being an anonymous institution, the project juxtaposes several ‘houses’. These are autonomous but at the same time well connected. This configuration underlines the domestic character of the project. Rather than being organized around large plateaus, the project is based on the emergence of volumes on a common base. With its welcoming areas, this space functions as a foundation that receives and guides users. It includes an entrance porch, a central garden and a loggia overlooking the canal. The project as a whole calls to mind the traditional inn, made up of various multistorey buildings surrounding a large courtyard and connected to the street by a passage.

Building for the future
The project puts an end to the exhausting input and polluting output of materials, energy and water, transforming everything into a local circular model. The same applies to building materials such as wood, which contain non-fossil CO2 and are therefore real CO2 reservoirs: traditional and innovative, logical and inexpensive.
In addition to the classic vectors of sustainability (emissions, biodiversity, flexibility and longevity of a building), the project focuses on social and sociocultural sustainability, in line with the European concept of ‘Baukultur’. A building that we all love – because it loves us all – lasts longer because it is supported and enjoyed by all. An anchor in a hard world becomes part of the collective memory. The centre provides a comfortable home for the frail, a home made in a sustainable and circular manner with a low environmental impact.

Living together
This project shows that a complex urban function – a badly needed frontline care centre around the canal – can co-exist with ongoing port activity. It meets the major concerns of our time: solidarity and economy.
The centre is being designed as a building that connects us, that puts us in touch with the city and nature, with the park and with the many cultures that characterize Brussels. It offers a versatile and open space on the ground floor with good social control that is active 24/7. At the same time, it is also a place where you can be by yourself without feeling lonely.
The centre responds to the request formulated by the city and its citizens to care not only for the most vulnerable but for all of us. By offering a safe shelter to those who have lost their bearings, we are finally giving everyone a home, but a home connected to the other, a place where we find our raison d’être. Architecture as an instrument of social justice.
_