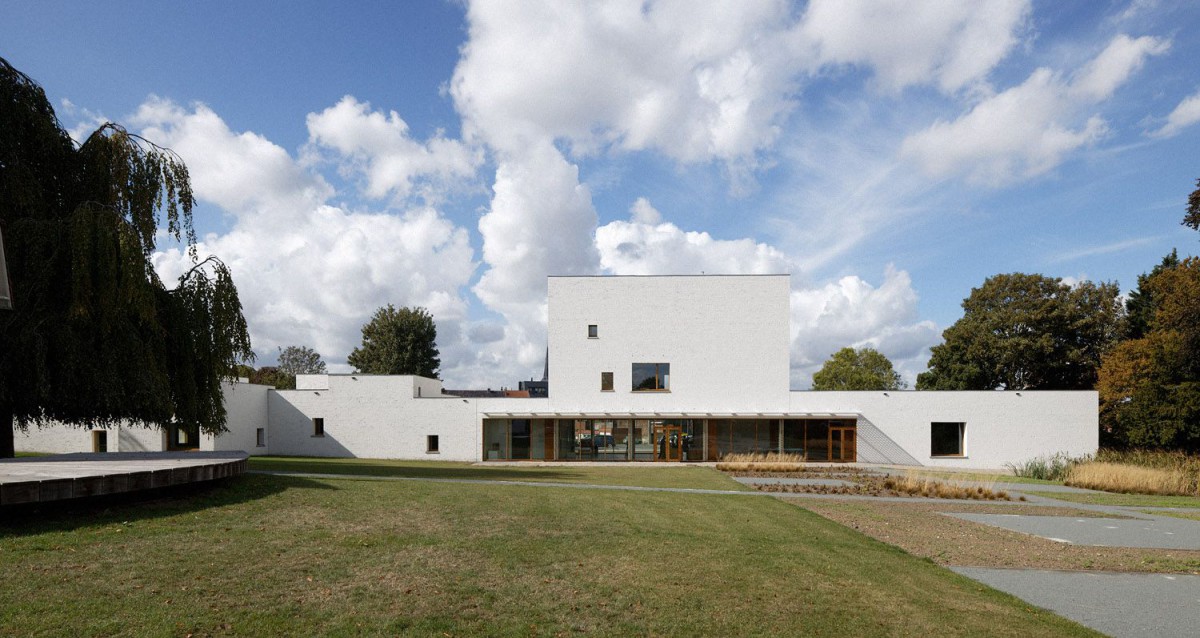 CONTEXT
Founded by Léon Maes (1898-1956), court clerk and local scholar, the Musée de Folklore de la Ville de Mouscron opened in 1954 in a former café behind the Town Hall. In 1978 it moved to the rue des Brasseurs, in the old house of the director of the public school of the Centre. In the rooms of the square building, collections redeploy as in the squares of a chessboard. In the form of reconstructions, dioramas putting in a situation all these silent witnesses of a bygone past. Donations multiply, and the collection quickly saturates the space. Gradually some of the museum’s services had to relocate to adjoining premises.

Following the 2002 Decree on the recognition and subsidization of museums in the French Community of Belgium (sector’s uniformity) Véronique Van de Voorde, curator since 2004, initiate a reflection to rethink the museum from top to bottom, from content to container, and to redefine its position in its geographical and linguistic context.

In 2010 the public European architecture competition was launched, won in the autumn by the architectural group V+/Projectiles, as well as Taktyk Landscape+Urbanism for the landscape.

URBAN APPROACH
The architects’ thinking is characterized by the proposal to move the program into a new, autonomous, thin and linear building in the heart of the block. It deviates from the command for an extension of the existing building, allows for an urban and landscape reconfiguration of a set of disparate locations.

The stretched and crenellated volume of the museum is installed in the continuity of a former hosiery, a building bristling with sheds, located in the paved alley leading to the heart of the island. Thus, from the rue des Brasseurs, there is tangential access to the new museum. This elongated volume forms the interface between the public car park, in front of the building, and the Lenoir garden. Between courtyard and garden, the architecture, designed with excellent economy of means, is an interface in the mineral and vegetal relationship.

ARCHITECTURAL PROJECT
The building adopts a flat profile, writing and materiality in dialogue with the vernacular constructions of the surroundings. The characteristic crenellated exterior pattern of this project corresponds to the rhythm and height of the interior rooms. These rooms are built in a domestic approach and dimension according to a square grid of 5.3m by 5.3m. They differ from one another in their heights and articulations according to the needs of the scenographic program. The whole approach of the project sums up in that search for a contemporary vernacular, for an architecture that is in tune with everyday life, that accommodates the most ordinary uses, that spatializes human rhythms.

The interior and radiant layout of the building allows for an archipelago operation that exploits the various existing buildings. The crossing foyer subdivides the spaces for permanent and temporary exhibitions; the storerooms are in the basement, the educational workshops in the old building, with direct access from the street; an estaminet in the pavilion in the middle of the garden, etc. What remained, in the competition, as a simple extension grafted onto the existing building, ultimately resembles a real urban project that transforms the city and federates the hitherto disordered energies that run through it, far beyond the scope of the commission.

SCENOGRAPHIC PROJECT
Léon Maes, who was the instigator of the collection of movable and documentary heritage as early as the 1930s, was motivated not only by scientific and ethnological but also by political and ideological motives. He aimed to safeguard the traces of a world in danger of disappearing, the fragments of a still rural culture swept away by the rapid industrialization of the region. This mutation, which he documented and resisted in his way, was also about identity and language – hence his insistence on collecting the speech, traditions and songs of the Picardy dialect. This activist of the Wallonie’s Ligue defends, through his work as a folklorist scholar, the cultural identity of the French-speaking world.
The curator committed the Folklore Museum to be a museum of society, “working on a cross-border territory, a population stirred up by three cultures”, and has called for a more critical, more selective and more open exhibition of a collection that is both tangible and intangible.

The scenographic project is a result of intensive exchanges between the museum team and the Brussels and Parisian architects.
For the authors of the project, these natural objects must find within the Museum a domestic scale of the display. The exhibition rooms design is like rooms of a big house: the heeling of the ceilings, to which the wooden framework of the partitions responds, the size and position of the bays deliberately break with the abstraction of the Museum white cube. The objects remain organized and exhibited so that they dialogue while playing the ordinary of architecture.

ARTISTIC INTEGRATION
The project stands out for its creative integration that is particularly relevant to the context of the Museum and its architecture. Using the region’s recycling industries, artist Simon Boudvin proposed mixing old bricks from eight buildings in the city – factories, houses, farms, warehouses, convents and cinemas – with the new facing bricks of the Museum, and documenting their demolition through photography. Eight “cartel bricks”, glazed white and bearing a number, indicate on the wall the different origins. Far from any fetishism, nostalgia or recycling morality, Simon Boudvin sees this façade as a kind of architectural palimpsest that allusively, almost invisibly evokes the long life of things and places the building in broader time cycles, as if it were porous to time. There is no trace of morbid or picturesque aestheticization in this device.
The approach was initially judged too conceptual, attached to too banal, too intimate or perhaps too painful elements of local culture. This artistic project, however, fits in perfectly with an architectural and scenographic project that seeks precisely to mobilize things and people.

THE ARCHITECTURE UNIT
This exemplary project refined by close collaboration between architects and project managers under the supervision of the Architecture Unit of the Wallonia-Brussels Federation. Since its foundation in 2007, the Architecture Unit of the Wallonia-Brussels Federation has systematically associated this institutional mechanism of dialogue between designers and clients with the public commission for architecture to enrich and refine the competition project. The method developed by Chantal Dassonville’s team was particularly appropriate in the case of a city where the design of public buildings abandoned to the municipal technical offices. Within the support committee, each person was able to state and confront his reasons, his criteria, his registers of reflection, before the form crystallized. But, at the same time, the project shifted the lines; “all the players repositioned themselves as the dialogue progressed”.
_