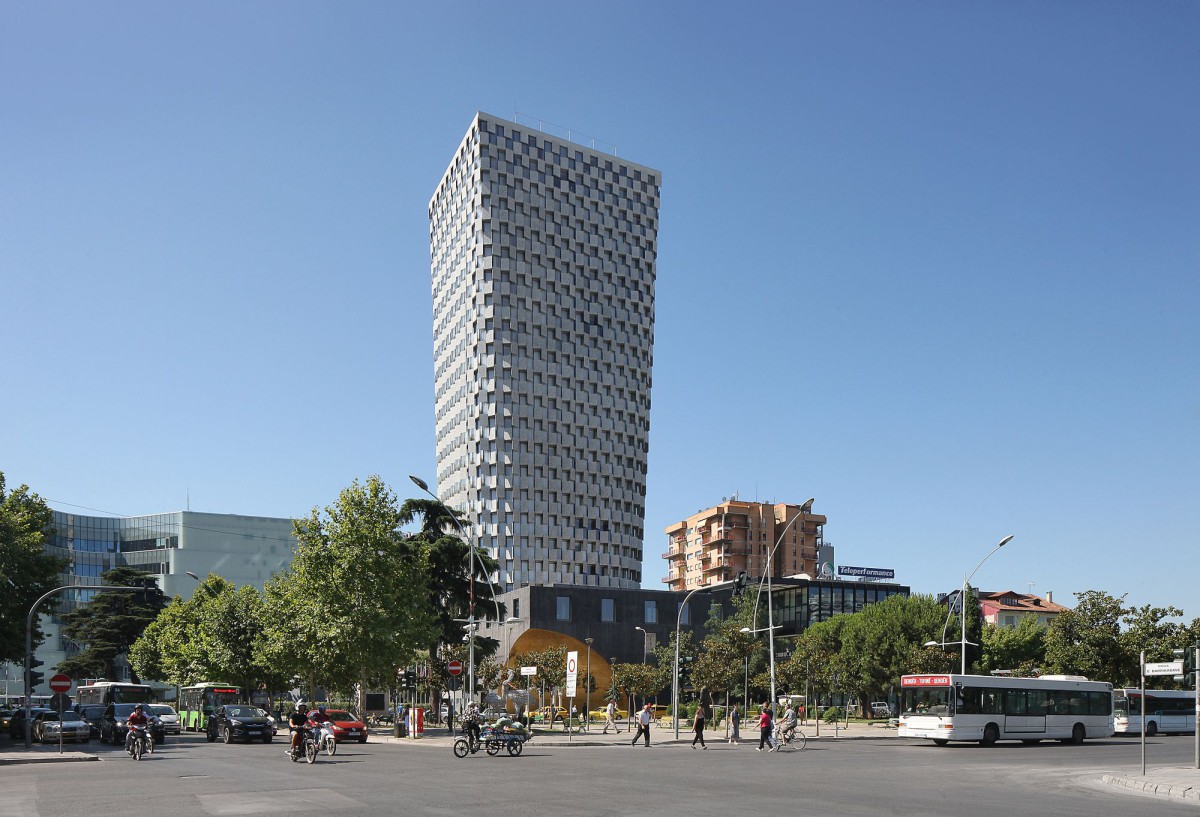 Communism collapsed in Albania around 1991. Before, the country lived in severe isolation even from other socialist countries, a situation comparable to the disconnection of North Korea today. The violence during the regime found an equally violent counterpart in the way the country opened up to a so-called ‘free market regime’, which was in reality a destructive mix of pyramid schemes, widespread corruption and anarchy. Also the urban environment suffered from this, being victim to cancerous illegal settlements. People were building everywhere: on rooftops, in courtyards, parks and riverbeds.

The TID tower is part of a series of operations to bring the idea of the city as a collective space back in the hearts and minds of the people. The first wave was an emergency operation: in the year 2000 an ‘urban guerilla’ started, combining the destruction of buildings with the painting of facades in strong, larger than life colors. The second wave in 2003 was more organized and planning oriented: it crystallizes in a master plan for a pedestrianized center, marked at the edges with 2 parallel (and monumental) rows of towers. The TID tower is one of them, and until today the only one that is built.

The site for the tower qualifies as a prime location: it can be seen from the main boulevard entering the city. As a consequence, the tower complements the most important monuments of Tirana: the Skanderbeg statue, the oldest mosque, the clock tower and –at the foot of the tower- a memorial tomb for the city’s founder Suleiman Pasha. Being aware of this precarious historical line-up, the tower is designed as a monolith, avoiding the image of the modern glass tower. Starting from an ellipse and ending as a rectangle, the building has a simple shape which fully captures the Mediterranean light of Tirana and generates a wide range of unexpected shadows. It does not symbolize anything but simply highlights an environmental –and as such, cultural- condition.

The building and base are designed to be program-neutral: the generic layout of the floors and the rough skin of the tower (50% open – 50% closed) allow to accommodate any program. The whole structure is straightforward and well-made: the Sisyphean construction process consisted in getting rid of badly copied international building solutions and replacing them with new solutions with the proper amount of precision. It meant that we –together with the client- had to find and create local capabilities, resulting in an unexpected range of high quality but low-tech solutions. During this process, the tower became more and more basic, leaving diversity and a hint of luxury for the ground floor. Here, the building is designed as a constellation of 3 singular buildings: the tower of 85 m height coming straight down to the ground, a 5 storey glass building with a cantilevering roof that creates an open air galleria and finally a small concrete building with a hollowed out quarter dome, embracing the tomb of Suleiman Pasha. Together, these buildings generate a multiple and diverse environment, enhancing the most durable quality of any Mediterranean city: its public space.
_