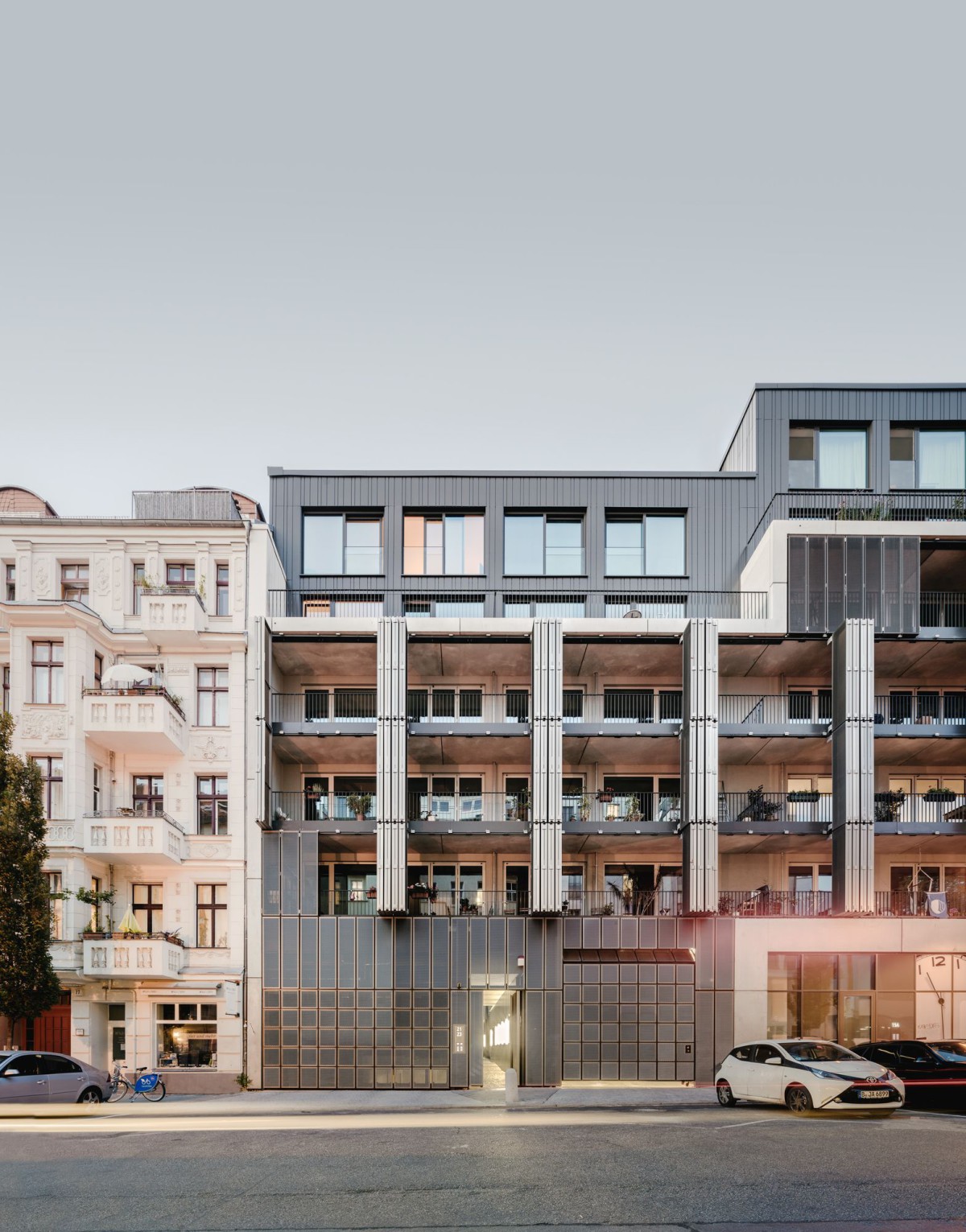 This new residential complex is located on Pasteurstrasse, a street in the quiet Bötzowkiez area of Berlin’s Prenzlauer Berg. Realized as a joint venture between its future residents, this project comprises of fifty-one units spread across four separate buildings. The complex stands on a site previously occupied by a freestanding supermarket, which has been seamlessly integrated into the ground floor of the building facing the street. The project thereby closes a gap in the block, engaging in a retroactive densification of the inner city—but also, above all, repairing a damaged urban fabric. A contextual approach was taken to better integrate the complex with its surroundings: the existing neighborhood, in effect, was simply built further, with the complex adopting the building lines, materials, and colors of its context.
_

The street-facing part of the complex spans across four parcels, thus forming a continuation of the street fronts of the adjacent historical buildings. Behind it are three “garden houses,” which are grouped around a communal courtyard that has been placed on the roof of the ground-floor supermarket. On both sides of the three garden houses, four smaller courtyards are created along the borders with the surrounding properties. Resulting in a wholly new spatial arrangement, a sequence of five courtyards that vary in size, form, and use.

The building blends into its neighborhood, despite its use of modern materials. The multilayered façade of the street- facing building, thanks to its translucent appearance, creates varied, constantly changing surface effects that can be appreciated from both inside and out. The folding shutter elements, made of anodized expanded metal, play with the residents’ perception of their surroundings and work with seemingly irreconcilable contradictions. Depending on the time of day, the lighting situation, and sunlight exposure, the building appears somewhere between open and closed, light and heavy, bright and dark. In this way, it creates a connection between interior and exterior while also providing the privacy necessary for those spaces facing the street.

Within the interior of the block, the boundaries between inside and outside are similarly blurred. The continuous balconies with their exposed-concrete parapets seem to thrust outwards from the buildings, creating a fluid transition between domestic and outdoor space. The courtyards provide green living spaces in the middle of the big city.

The different residential buildings feature a variety of living types and apartment sizes. Their main feature is the flexibility within which their floor plans can be subdivided, thereby accommodating the individual needs of the inhabitants. The simple structure of the buildings leaves plenty of leeway for residents to design the spaces themselves before moving in, and also provides the opportunity to adjust the apartments to changing uses and needs later on. The units range from two- to five-bedroom apartments. Starting at 60 square meters and going up to 200 square meters, the units offer generous proportions and occasionally span two, even three, floors. Floor-to-ceiling windows mean well-lit rooms and a connection to the outside. Each apartment also includes access to a private outdoor area (be it a balcony, a terrace, a garden, or a rooftop garden).
_