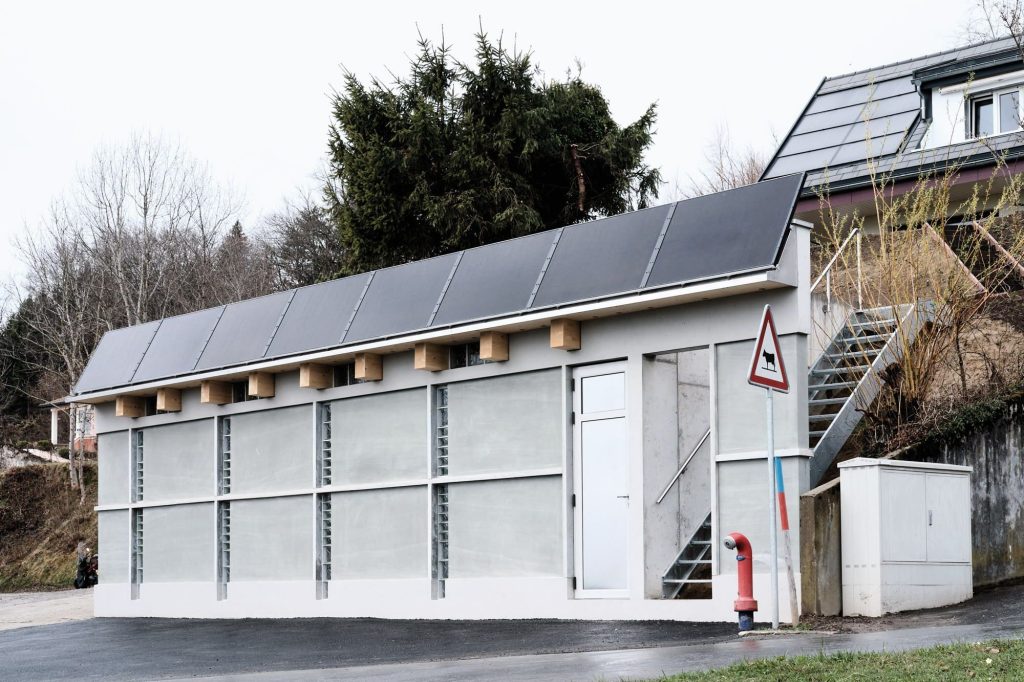 Since the end of the 19th century, the Lausanne region has put aside the construction of local sandstone called “molasse”. All the important buildings in the region – such as the cathedral, the castle and the former university – were built with this stone.

The Nialin quarter in Savigny, in the heart of which the garage and workshop project is located, is a former molasse quarry which employed around thirty workers until 1870. More generally, the molasse quarries in Savigny were developed when those in Lausanne were too difficult to access. Today, the commune keeps the trace of this excavation by large circuses dug in the topography, terraces on which the individual houses were then built, during the 1970s.

The stone facade project has its origins in the history of the place, but its formal logic lies in the optimisation of the size of the blocks and the desire to reduce the effort of building. 2m wide by 1,20m high by 20cm thick; this was the basic measure defined in consultation with the operators and craftsmen of the Villarlod quarry for the design.

In addition to the bluestone, the facade consists of prefabricated concrete elements that act as a horizontal drop and a vertical windbreak. At the same time, these elements incorporate a reinforcement mesh that enables the monolithic construction to withstand seismic stresses.

Finally, the roof of the building is a wooden frame and the eaves that protect the stones from erosion will integrate photovoltaic panels in the form of a cornice that completes an assumed tectonic composition.
_