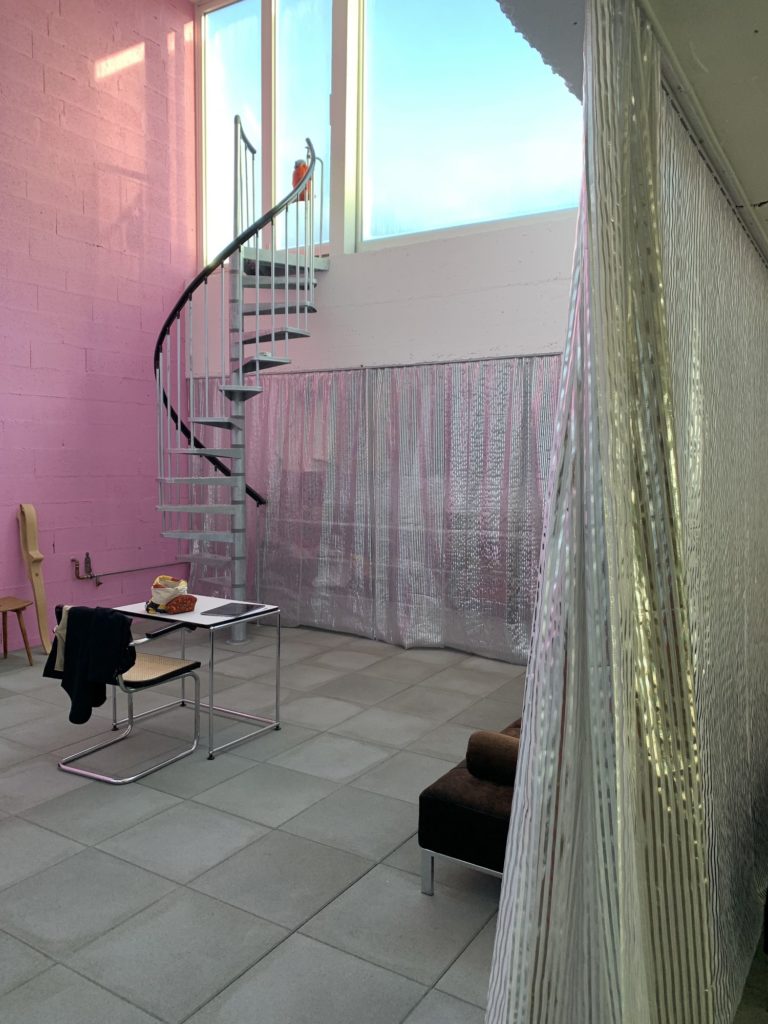 South of Geneva city center, in an industrial zone, a former beer brewery is the witness of a paradigm shift. With the departure of the brewery, the robust structure has been divided into smaller lots. It is now hosting diverse programs, such as a bread maker, a construction firm, a movie company, a landscape architect, and others. It is the symptom of a changing city. The sign of a change in the perception and use of our built environment. Occupying one of those lots, JNS was made in auto-construction during a year. It is a reconversion of an industrial space into a living and working environment, questioning zoning, normative confort and daily use of architecture.

The material used for the project was mainly found on site. The project started with a huge effort of demolition and elimination. The demolition of built structures of the lowest quality – impossible to reuse or recycle – as a first act of design allowed us to think about the consequences of our profession. Three tons of material and of built structures had to be taken out of the space before starting anything, uncovering the space in all its dimensions.

On the lower level, the office is taking advantage of a garden, lot of space and light. On the mezzanine level, a more intimate and withdrawn space is hosting a place to live. The kitchen act as a shared and connective device. A glass front can be entirely open, creating an immense raumplan. Heating is provided through solar gain from the south, and two wood burning heaters, one on each level. Thermic curtains allow to create subspaces, following the changes in temperature and seasons. In winter, some spaces, unused during the day, remain unheated, while others are intensively warmed. In spring and autumn, when strong temperature variations occur between day and night, the office space orientated toward the south acts as a heater for the rest of the space. In the summer, air can circulate from the balcony in the south through the garden until the roof, offering a welcomed cooling breeze. In JNS, use of space follows and adapts to seasons and programmatic needs in an ever changing configuration.

The spaces (temperature and humidity) are currently monitored by the chair of Prof.Dr. Sasha Roesler in Mendrisio (CH) for a year long study which should be part of an upcoming publication.
_