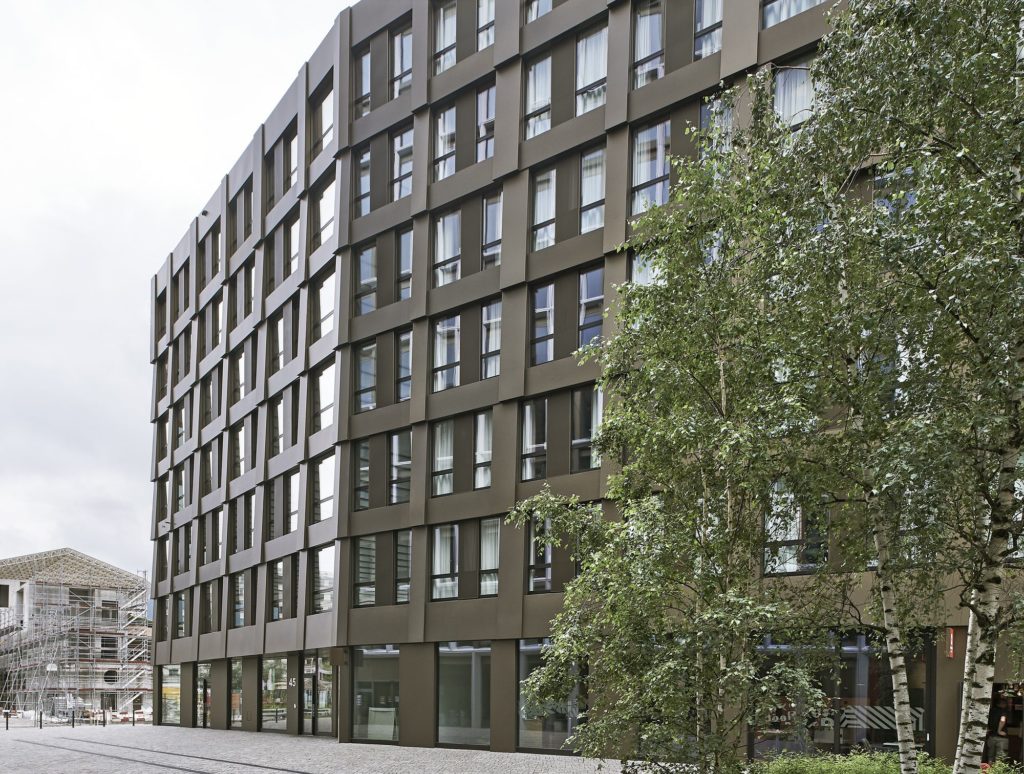 The mixed-use district Greencity, based on the principles of the 2000-watt society*, is under development on the former industrial site Sihlpapier Manegg in southern Zürich. Situated between the railroad tracks and the motorway, the seven-storey hotel and office building together with its eleven-storey neighbours forms the head of the new district facing the city centre. This ensemble frames a public courtyard, adjoining the elongated Maneggplatz. The oblong, lower building faces the tracks and street to the west as well as the courtyard. The latter is widened to piazza-like proportions by a tapering of the volume towards the north. Three covered recesses lead to the entrance halls of the different occupants. On the façades, overlapping horizontal and vertical elements of brown anodized sheet aluminium alternate with wood/metal windows and slender ventilation flaps. Depending on the point of view, openings and cladding, structure and envelope interpenetrate.

The international design competition for the site was based on a preliminary plan that stipulated tall building volumes next to the motorway for offices and services. Gigon / Guyer’s urban design was awarded first prize and further development was split between two architecture firms.

The present project was initially planned exclusively as office space, and in a second phase, exclusively for hotel use. The uses are now combined: one-third office space, two-thirds hotel. The office space occupies the southern part of the upper floors and includes a lobby, staircase and lift core. The ground floor here houses a day-care centre with a separate entrance. The hotel reception welcomes guests on the street side, whereas the breakfast room and bar face the courtyard.

A load-bearing skeleton of concrete columns, floor slabs and cores allows for various uses. The façade reflects the flexible partition grid of the floors as well as the construction, but at the same time this is overridden by the subtle offsets of the cladding, window frames and ventilation flaps between storeys. The tilting of the metal profiles contributes to multiple readings of the façade – creating impressions that are suitable both for the offices and the hotel.

In accordance with the core-and-shell model, hotel and office tenants fit out their own spaces. However, lobbies, staircases and lift cores, connecting outside and inside, lower and upper floors, are coherent in appearance: polished concrete flooring echoes the load-bearing structure, while dark brown metal surfaces refer to the building envelope.

* Up to 2000 people will live in Greencity, 3000 will work or study there. Among the goals are a commitment to mostly renewable energy sources, eco-friendly mobility thanks to the central suburban railway station, numerous bicycle parking spaces and open, car-free spaces in the district.

The ambitious energy specifications are met by the building through the use of geothermal heating, insulation layers of 20–24 cm, as well as photovoltaic panels on the roof. In the office spaces, heating and cooling ceiling elements, which also include ventilation inlets, provide efficient distribution. Exhaust air is centrally extracted at the cores. The hotel rooms are heated and cooled with pipes embedded in the ceiling rendering; the air ducts are installed above the prefabricated bathrooms. These and other measures ensure that the building can be LEED Platinum certified.
_