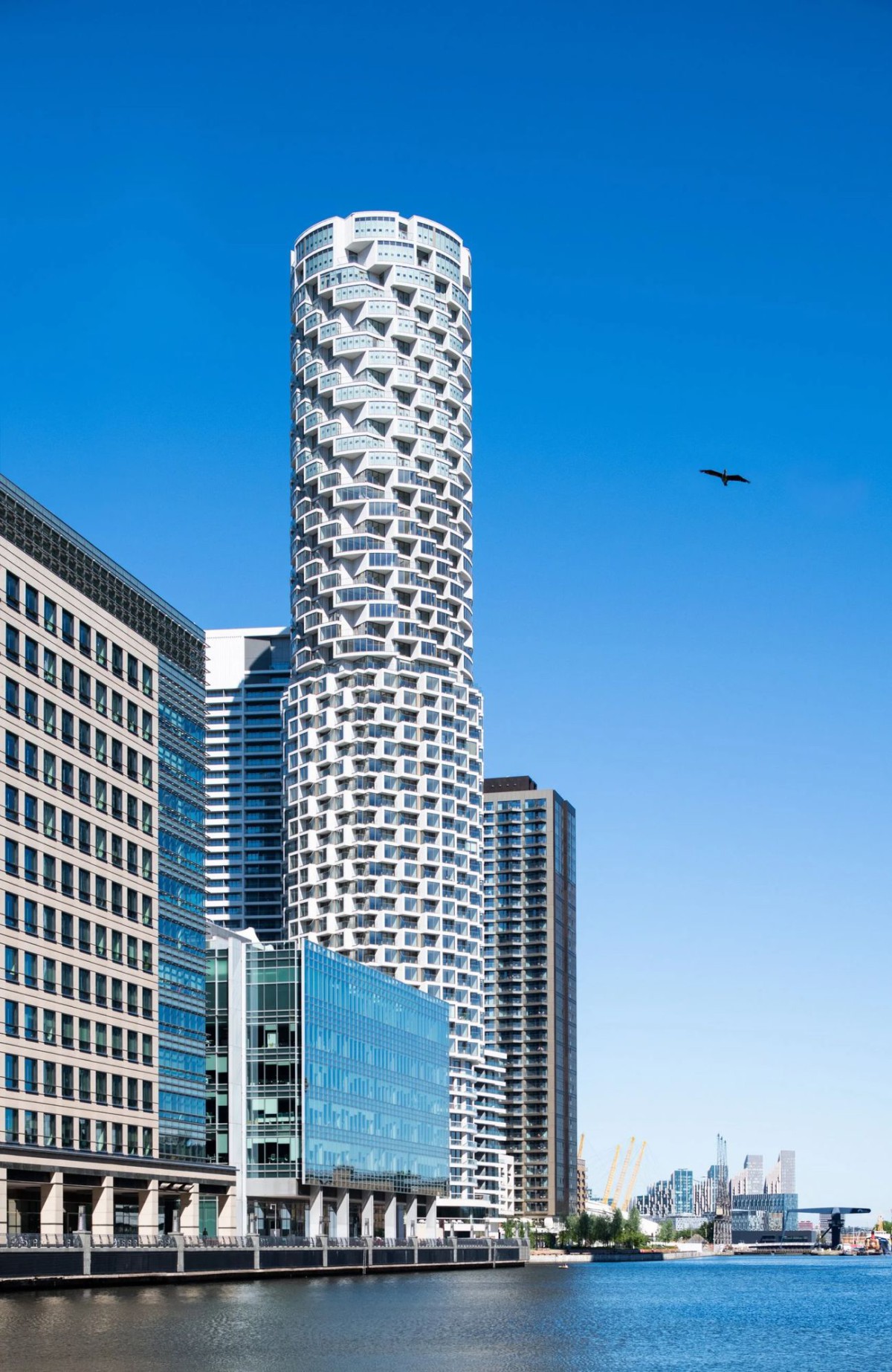 The project for a residential tower at London’s expanding Canary Wharf Estate will form part of the new district of Canary Wharf. The building will help to shape the identity of the redevelopment of one of docklands’ last large remaining undeveloped sites. It is a tower simultaneously iconic in form and human in scale that embodies the aspirations of its new context, an extension of a dynamic global community and the start of a new vibrant neighbourhood.

Tower Geometry
Set against the backdrop of the existing Canary Wharf buildings, the circular form of the new tower clearly distinguishes itself from its orthogonal neighbours. The form is a statement of the tower’s difference. It is a residential tower adding a new dimension to an area dominated by commercial space. Anchoring the western end of the new district, the circular tower is viewed from all sides. It is seen equally from the streets of Canary Wharf, the new promenade and the waterways surrounding it. The tower addresses both existing and future context with no one elevation privileged over the other. The plan grid is rotated 45 degrees from true North to optimize sun light exposure to each unit. An orthogonal stepped unit plan protects units from cross views while offering multiple vistas.

Residential Scale
The exterior of the new residential tower is the outward expression of the residential units that constitute the majority of the program. Aggregated together, these units form a tower facade that offers a clear distinction between the human scale of the residential development and the unifying mass of the office towers behind it. Varying scales of balconies and terraces bring life to the facade. The stepped elevation and changing relationship between slab, demising wall and glass is a clearly identifiable manifestation of the unit typologies distributed through the project. Individual units will be as recognizable as the overall elevation.

Unit Mix
The building contains 483 apartments arranged over 58 storeys. Characterised by their distinct relationship to the exterior, the apartments are separated into residential typologies appropriate to their scale and relative height. Larger loft type units with high ceilings and generous outdoor areas take advantage of their proximity to the water and the relative wind shelter afforded by their lower elevation. Smaller apartments make up the majority of units in the central section of the tower and express their mass and scale through the aggregated projection of rooms offset from the cylindrical form above and below. Alternating stepped floor plans provide balconies for each unit.

The upper levels of the building are predominantly made up of larger two and three bedroom units, each apartment benefitting from generous set back terraces carved from the cylindrical volume of the building.
The resulting geometry creates a distinct spiral of large bay windows which offer each apartment generous views over the surrounding docklands and across London. The different apartment typologies create spaces that are at the same time unique and related – homes that are designed to maximize the potential of their own particular scale and elevation, yet are clearly tied together by their overall architectural expression.

Public Space
The new tower is a visual gateway to the new district at Canary Wharf. It is the focal point of a new dock edge promenade and the anchor of the new park proposed to line the southern edge of the master plan. At the base two distinct levels offset from the main tower clearly identify the public components of the project. Amenities offering services for the public and tower residents activate the waterfront, park and residential gardens that surround the building.

City and Tower
Our proposal for the new residential tower at Canary Wharf is a singular form expressive of its residential programme, the existing and future context, and its role as both a symbol and heart of the new urban development. It is a tower that mediates between the city and the individual, public and private.
Herzog & de Meuron, 2015
_