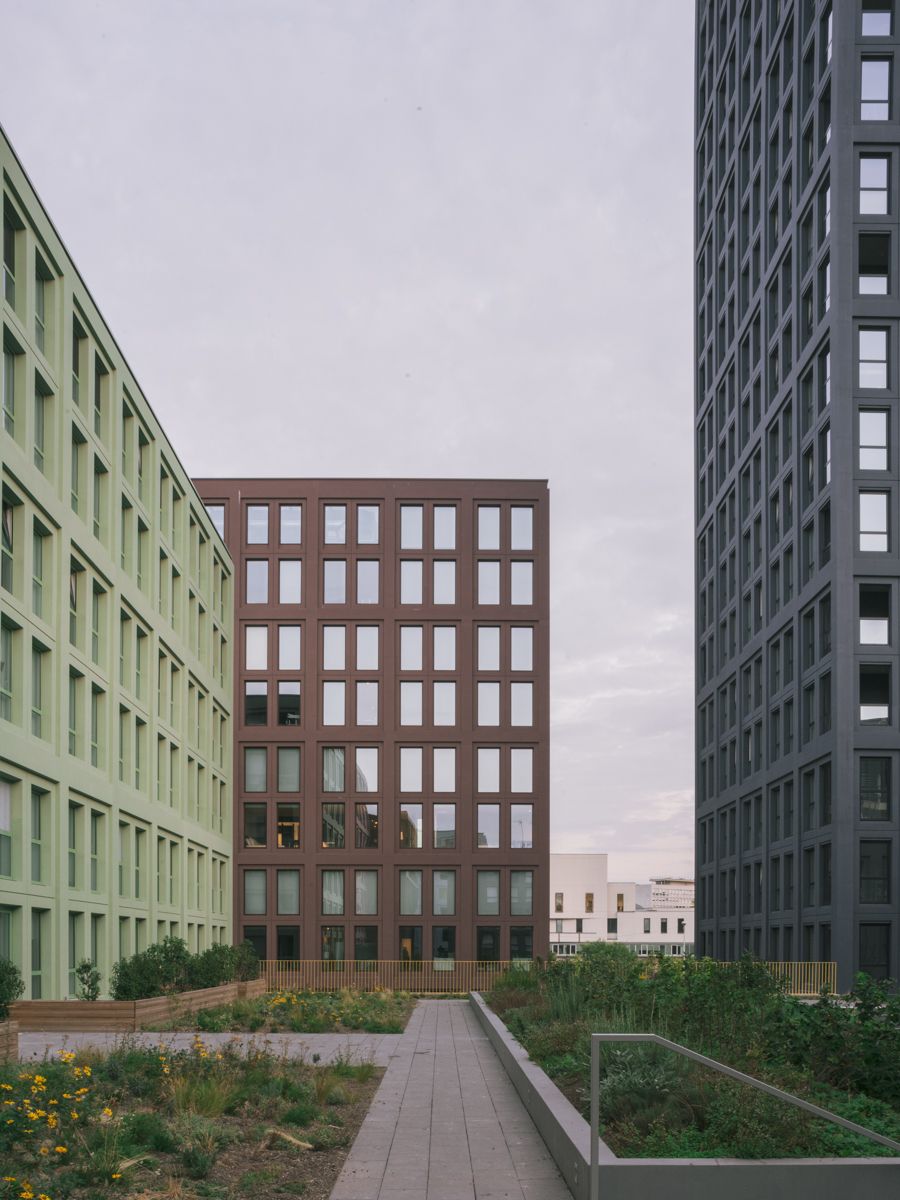 The Saint-Urbain block has now completed the urban development zone Étoile in Strasbourg. Located between the Saint-Urbain cemetery and the Parc de l’Étoile, bordered on one side by the broad avenue Jean Jaurès and on the other by the cross-border road E52, the new neighborhood appears as an urban Island, a colorful emergence in the horizontality of Neudorf’s landscapes.

Colors over the city
At a local scale, the project activates a major link between the city center and the Neudorf district. At the regional scale it constitutes one of the milestones of the “Deux rives” urbanization project, which itself extends as far as Kehl in Germany. Set in this strategic position, eight buildings today embody the urban ambition of the new Euro-metropolis in giving form to 21500 m² of a mixed real estate program, composed of 178 housing units, a hotel, offices and commercial space.
In its size and its ambition, Saint-Urbain is a new fragment of the ecological, democratic and lively city that is taking shape today.

An urban island
The Saint-Urbain block takes advantage of a condition of relative isolation in order to affirm its own identity and to generate a new intensity. It is an urban island that relies first and foremost on a complete and autonomous programmatic offer. Emerging an environment of flows, the seven volumes of the new neighborhood sit on an active base made up of food shops and essential services, distributed around a garden. It is an attractive place for work and is ideally located for urban tourism (an Aloft hotel opened there in September.) Insular, yet perfectly connected to the rest of the city.
The housing – offered in terms of free, assisted or intermediate ownership, or as social housing – responds to the diversity of possible living situations and enriches the experience of its occupants based on social and trans-generational co-living. If the functional diversity of the block provides energy to the daily life of its users, its residential diversity allows each individual to imagine residing there in the long term.
The sustainability of the buildings is a central question. Each of the buildings offers high performance in terms of energy, while still maintaining high levels of comfort. As a first architectural response to the public health crisis we’ve been experiencing since March 2020, this notion of the comfort of living spaces is a leading ambition. Large windows provide all of the housing units with ample natural light, while generous loggias complement the units as exterior extensions, both open and intimate, and necessary for collective life.
The project goes beyond (and transforms) the modernist element of the slab, staging its disappearance. Vegetation takes a central position in this strategy: all the roof terraces and the entirety of the base are planted. Beyond maximizing water retention, the principal of re-planting the block allows for reestablishing ecologic continuities with the adjacent green spaces, the Parc de l’Étoile and the Saint-Urbain cemetery. It means going beyond objectives of a performance-based ecology and towards an ecology of well-being, at home and in one’s own neighborhood.
The buildings’ sustainability is also a statement of commitment. As Baudelaire once wrote: the form of the city changes, alas, faster than the heart of a mortal! Our current times wouldn’t contradict this, and the uncertainty that characterizes this era forces us to think differently about the lifespan of buildings. The construction-related choices that guided the building of the Saint-Urbain block thus anticipated its possible future evolutions: load-bearing envelopes allow for the liberation of its interior spans, with rational construction leaving open all possibilities for layout and for evolution of program.

Histories of windows
Gathered around a common garden, the eight volumes of the Saint-Urbain project together compose a dense, compact city block. The vis-à-vis and the adjusted spacing of the blocks contribute to a domesticity of the neighborhood and enhance a feeling of belonging. Between the visible and the hidden, both the intimacy of family life and the urbanity of collective life are played out.
Architecture here guarantees a sociability of closeness while at the same time opening up to the urban landscape and metropolitan horizons. It is the experience of this specific and extremely qualitative relationship of scale that is proposed, starting from a careful reflection on the window and its repetition.
This idea of the repetition of architecture by architecture itself is essential in this case. It is through repetition, first and foremost, that the project gathers the history of the city. The architectural forms of the Saint-Urbain block ultimately repeat those of the past. Through the design and composition of their facades, they assemble the historic facades of Strasbourg and add new vertical pages to the Alsatian capital. The project’s architecture plays on this cultural transmission as a language in which the window would be the first word.
The architecture is also repetitive in itself. This condition aims towards a level of neutrality and plays out in the relationship between the elements composing the buildings, their structure, their profiles, and the bodies that pass through them. The window and its multiplication, in rows and columns, allows for connection between these scales of architecture and of man.
Finally, repetition is democratic. Regardless of who lives behind these walls, when seen from public space, the unity of the facades reestablishes the equality of its inhabitants as citizens.

Histories of colors
If the window promotes values of equality, color speaks to us of identity.
Contrary to modern theories of his time, the artist Joseph Albers proposed a theory of colors based on the study of relations of colors between themselves. He claimed that the perception of a color is principally determined by its neighboring colors. He said that what we perceive of a color is in fact the product of an interaction with that which surrounds it, which forms its background. The theories of Albers thus spatialize the experience of color through relationships of adjacency. They speak to us of architecture.
These relationships of adjacency are conceived differently and take on different meaning according to the scale of their perception.
At the scale of the city, the selection of colors places the Saint-Urbain block once again within the history of Strasbourg. The brown of the hotel refers to the city’s historic buildings, to the nearby city of music and the buildings on the Place de la Bourse or even to the cathedral, built in Vosges
sandstone. The olive yellow is a pastel found again in the historic center, particularly in the Petite France district. Color also works as a signal – most notably in the case of the tower, whose effect as a totem is strengthened by it being dark blue.
At the scale of the block, the interaction of colors plays out through complementary selection and through distancing of the plans. This interaction helps generate a peaceful atmosphere while also bringing urban qualities to the public space. The pink is taken from the neighboring facades of the Neudorf district; the greens, both light and dark, are chosen for their opposing tones. Public space becomes a colorful in-between. The sky blue is a reminder of a small building adjoining the cemetery. The grey, in its interaction with the other colors, leads them to take on different tones according to different points of view.
At the scale of the building, and in particular for the program of housing, color promotes individuation; that is, the affirmation of an individual identity. Color also acts as a background, as decor for quotidian life, and accompanies the social and daily interactions of both inhabitants and passers-by.