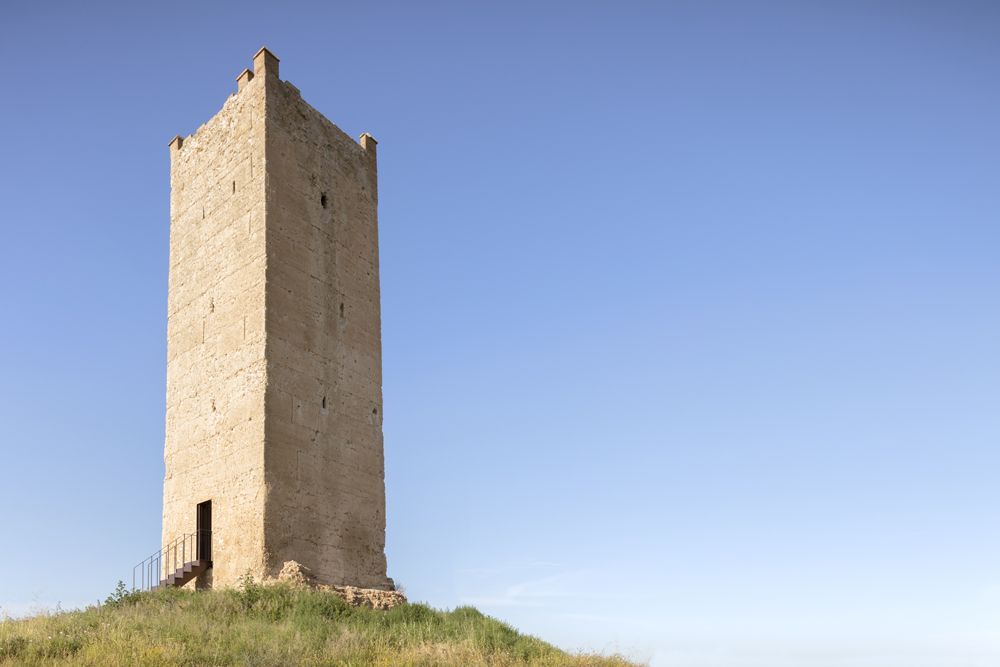 The Tower-Castle of Espioca is an Asset of Cultural Interest with the category of monument since 1993. It is included in the General Inventory of Valencian Cultural Heritage as well as in the Inventory of Archaeological Sites of the Department of Culture of the Valencian Community.
The construction technique is closely linked to the to the very nature of it. The defensive structures from the Muslim period were characterised by the use of rammed-earth technique as the main one. The construction was carried out with both local materials and labour. It speaks to us of the economy of resources and sustainability as in the case of the Espioca Tower.

Clear Islamic vestiges of the rammed-earth technique can be found on the walls. They show the way of life of society of the time as well as its significant defensive purposes. Thus, it is necessary to preserve this prints and imprints, such as marks and measures and the cavities of the needles in order to enable its future interpretation.
The present project aims at consolidating and completely refurbishing the Espioca Tower of Picassent along with the consolidation of the possible archaeological findings.
• Analysing and delving into the construction systems and the materials used in the Tower; defining a criterion of preservation suited to the enhancement of this defensive heritage.
• Clarifying its construction stages and constructing a historical hypothesis which would be contrasted with data obtained during the upcoming construction works. Proceedings about the recovery of the historical values of the monument will be raised allowing its readability.
• Studying the level of deterioration of the monument and stablishing a diagnosis which allows the evaluation of the conservation status of the property.
• Improvement of the structural stability conditions which approach the recovery of the lost bracing elements.
• Consolidation and restauration of both interior and exterior Islamic rammed-earth walls which form the tower as well as the lower basement.

Adress the works wouldn’t be possible without undertaking an in-deep study both the visible monument and the possible hidden traces under the existing mound in the immediate surroundings. Therefore, a first archaeological follow-up phase is carried out in order to obtain relevant data concerning ancient structures which must have been built around the tower creating its exterior picture.
A structural consolidation along with a restoration of the Espioca Tower in Picassent will take place. This is intended to provide stability to the shole as well as to recover and preserve the valuable historical structures which are still conserved.
The wall structures of the tower still preserve their own trails characteristic of their traditional type of construction. For this very reason, it seeks to recover traditional jobs, techniques and materials in order to restore lost stability to the whole. To this end, it has been decided to use the materials of the time. During Arab Period these materials were used to build that kind of defensive buildings. Our priority is to preserve the asset as well as to clearly differentiate between the original elements establishing a dialogue among the materials. Our premise is to preserve and raise awareness about the different historical phases on the monument.

It is necessary to undertake the consolidation and the reparation of the existing cracks. In the case of the more important ones a stitch on the wall will be required in order to weld both ends of the crack.
The paraments will be cleaned and consolidated paying special attention to the rammed-earth technique trails such as needles, sacks and rammed-earth joints.
The access to the tower will be through the original access. It will be possible with the help of a metal staircase done with two stringers which will be anchored to the ground; a stairway shall be placed on it too. This stairway will consist of a folded metal sheet that will reach the access level of the tower and will get into it.
The walls will be stitched by means of the creation of new floor slabs with a perimeter profile and a fretwork wooden beam which allows the passage of light from the highest part to the access. The vertical communication will be carried out through a lineal staircase of the same materials as the floor slabs.

In addition, an outfitting of the surroundings as well as the accesses is considered necessary. The sale agreement, now being processed, grants the use of the private property monument during 50 years and it will be realised in the future. This procedure, along with the restoration of the tower will mean a starting point for the recovery of the immediate surroundings of great interest. It will also allow to recover the historical connexion between this element of heritage and the people of Piccasent enhancing its landscape and documental value.
The intervention represents an opportunity of intervening surroundings of great landscape value flanked by historical communication routes and monuments of both artistic and architectural value such as the Espioca Tower of Picassent.
_