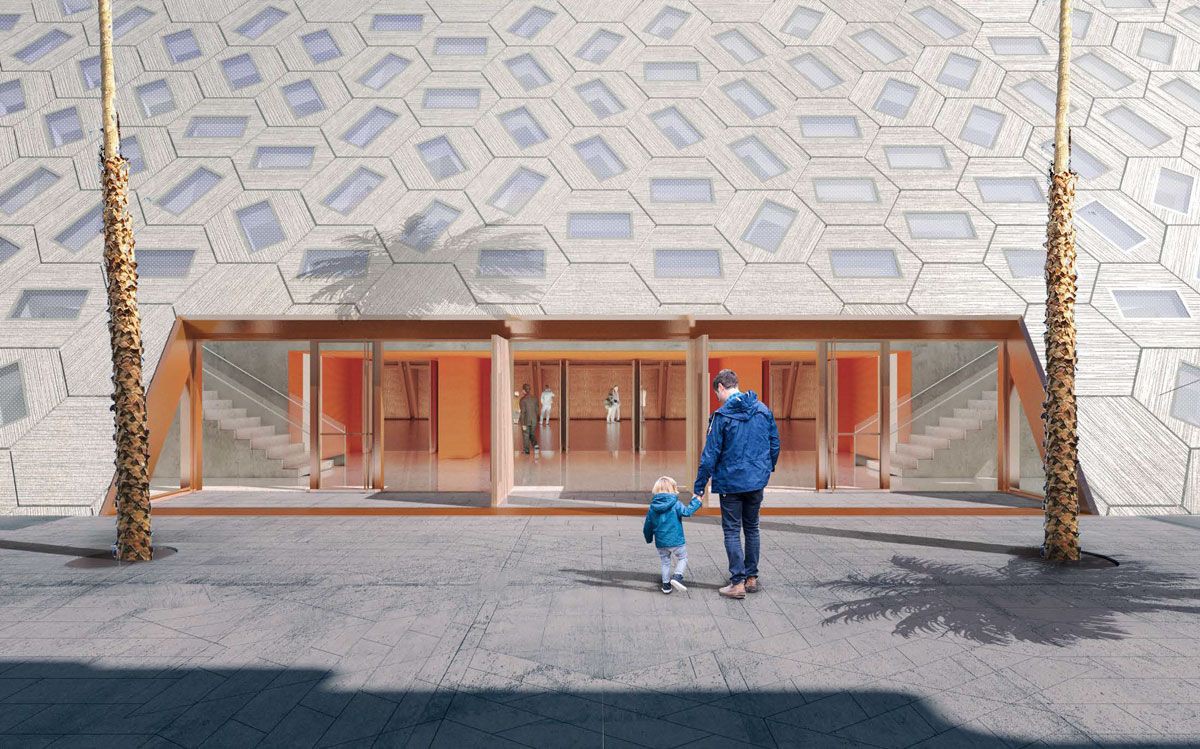 Groundbreaking ceremony scheduled on November 11 for the Audrey Irmas Pavilion, an expansion of the historic Wilshire Boulevard Temple. The $75-million project will replace a surface parking lot at the corner of Wilshire and Harvard Boulevards.

The Wilshire Boulevard Temple has released OMA’s design for the Audrey Irmas Pavilion. Designed by OMA / Shohei Shigematsu, the new addition to the Erika J. Glazer Family Campus will serve as a multi-purpose gathering place, forging new connections within the existing campus and creating a new urban presence to engage Los Angeles.
_

Named Audrey Irmas Pavilion for its lead donor whose gift for the project launched the capital campaign in 2015, the building will be in dialogue with the 1929 Byzantine-Revival sanctuary located on Wilshire Boulevard, midway between the Los Angeles County Museum of Art and Walt Disney Concert Hall.

The design is an expression of respect to the surrounding buildings – the west façade slopes away from the existing temple while leaning south away from the historic school. The resulting form, carved by its relationship to its neighbors, is both enigmatic yet familiar. The subtle expression simultaneously reaches out toward the main corridors, Wilshire Boulevard to establish a new urban presence.

The pavilion is comprised of three distinct gathering spaces that puncture through the building – a main event space, a smaller multi-purpose room and a sunken garden. The three interlocking gathering spaces are stacked one atop another to establish vantage points and framed views in and out of each space while creating a series of openings that filter light and reorient visitors to the complex and beyond.

OMA New York won the design competition for Wilshire Boulevard Temple in 2015. The project is designed by OMA Partner Shohei Shigematsu with Associate Jake Forster, in collaboration with Gruen Associates (Executive Architect). Audrey Irmas Pavilion is OMA’s first commission from a religious institution and first cultural building in California. The new building is expected to break ground in late 2018 with plans to open in 2020.
_