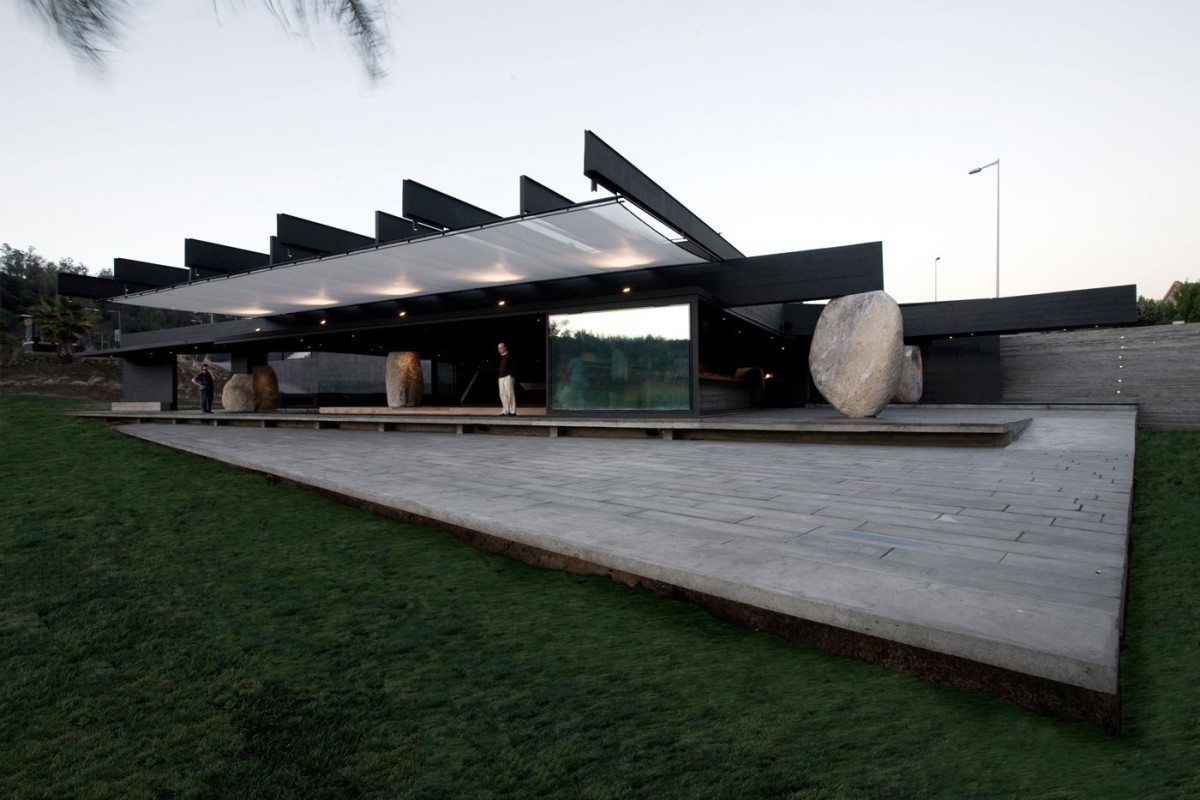 In the test model we put together a children´s float, which would be an inflated roof membrane; industrial irrigation support beams to withstand the lateral compression, and four granite blocks weighing 15-ton each, used as dead weights to retain this structure and its possible suction.
_

The client approved the idea shown in a improvised model, but we assumed that the local Government would not be in favour of a building made of seemingly ephemeral material, so we changed the technical solution without abandoning our desire to build a pavilion of estrangement. We designed a diaphragm of reinforced concrete beams and slabs, rough and painted black, which generate a pergola or soffit above the park zone designated to the building. Props descend casually from these beams to granite boulders in different sizes and weights.

CONTEXT
The restaurant is sited at the northeast end of the park and occupies a corner opposite some extraordinary water gardens stuck between a lookout hill ant the pavement skirting the Bicentennial Avenue.

PERFORMANCE
These stones, brought directly from the quarry, were installed strategically, up to 11 meters apart, in the manner of structural columns. These natural columns rest on benched landfill. They receive the building´s vertical compression loads, while the stiffness of the ceiling diaphragm transfer the dynamic horizontal forces during earthquakes to the retaining walls at the rear. I would describe the design strategy of this new model in much the same way as Josep Quetglas describes B.Lubetkin´s Highpoint II, apart from the fact that in Chile, the caryatids are replaced by Andean granite. Quetglass says: “This bringing together of things with divergent formal sources is a common procedure in Lubetkin. In Highpoint II, the daringly thin concrete marquee slab rested on two statues, reproductions of the Erechtheion Caryatids. Lubetkin explained this with his observation that any prop for the concrete slab would be a loss, bearing in mind the formal capacity of the slab to suggest a tense cantilever without supports. One way to make the support disappear was to dissolve it optically amongst the garden elements, seen through and beside the marquee. There are statues in the gardens, so the caryatids are part of the garden, like shrubs and flowerbeds, and by chance they coincide with the marquee and fit perfectly under it. Their courtesy prevents them from noticing the contact, and our gaze is able to distinguish the parts, some facing the garden and the others facing the building”.
_