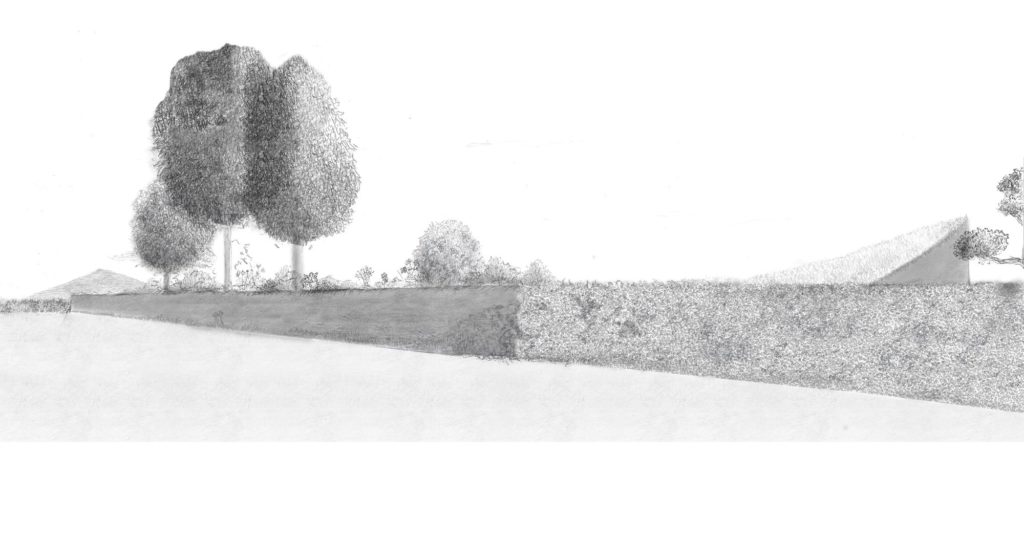 The site where I have designed the house for my mother was originally occupied by my grandparents’ house. It is also where I rew up during the first few years of my life. The building was part of an old farming village, with a wide expanse of rice fields to the west and a beautiful view of the mountains rising in the distance. My childhood memories of this site are of an intimate south garden surrounded by hedges and a windbreak formed by large trees, and the sense of being drawn into the inner depths of the adjoining, mostly tatami-floored house of my grandparents.

In recent years, one by one, many of the large plots of land that comprised the village have removed their windbreaks due to the difficulties in carrying out maintenance work for the ageing inhabitants. As a result of inheritance, many plots have been split up into smaller parcels on which small houses have been built. The contrast between the array of private gardens and the uninterrupted openness of the rice fields defined the village’s characteristic atmosphere, which today can no longer be felt.

After my grandparents passed away, this site was left unoccupied and the windbreak was cut down years ago. However, the former plot division has remained intact, only cleared of the building. Drawing on my memories, I am making a house here for my mother on a scale where she can reach everything. Currently nearing completion, it will be a gentle and fitting environment for this site and for my mother’s everyday life. All the living spaces will have a depth of 4.6 metres and overlook the south-facing garden. The shallowness of the interiors means that the garden can be perceived everywhere. The height of the eaves is at 1.3 metres, which is slightly lower than my mother’s height, at a level she can reach with her hands.

Extending 32 metres east-west, the low eaves form a gentle pause between the garden and the interior of the house. The shallow interior facing the low, long windows is floored in tatami. From the brightness by the windows to the darker areas at the back, the long and narrow space will give rise to a harmonious coexistence of both light and shade. The wall surrounding the garden is seemingly continuous with the exterior walls of the house. The ground extends continuously from the tatami floor, and the garden parallel to the long eaves forms a gradual slope upwards towards the south, until it reaches the top of the southern wall to form an embankment.
_