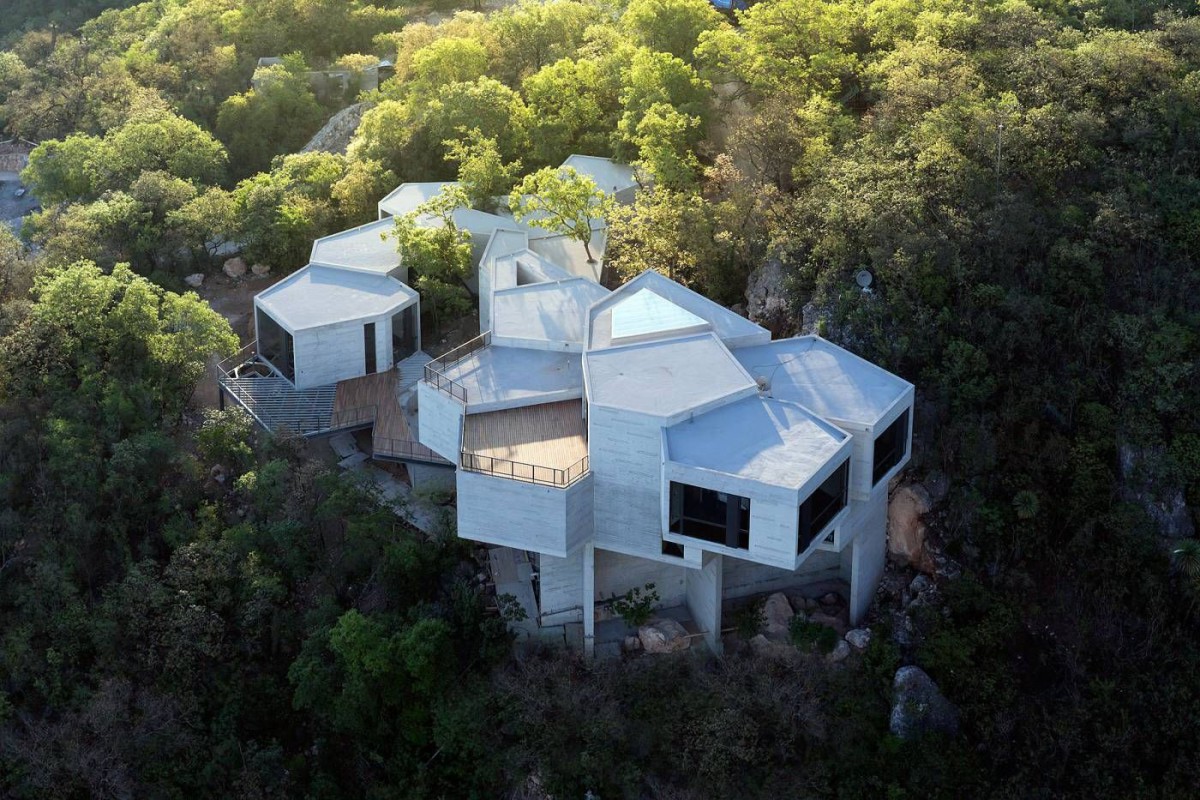 Each area of the program is enclosed within a pentagon and each pentagon arranged to fit within the topography. Each geometric form is slightly adjusted to allow for free transit and space continuity, follow the slope, and enhance the views.
_

OBJECTIVES
The public spaces of the house are mounted over a flatter topographic area where we managed to create a large space with free circulation while the private areas are inserted within the slope in steps. A spiral staircase with overhead lighting links both areas allowing for a flowing circulation starting at the main access and continuing all around the house in a free and interrupted manner, rendering this dynamic house very legible. The materials were determined by the structural and climatic needs of the site. Thus, we decided to use concrete in its most apparent and natural form, creating a sense of belonging to the location. The house builds up like another protruding cliff or like a fractal from the same slope. We didn’t build a house over the hillside, we built a house, which grew organically on the hill and became part of the composition of the natural environment.

CONTEXT
This project presented a high level of complexity. The family house was to be located in the valley heights of Monterrey, the suburban site has a spectacular panoramic view of downtown Monterrey, but also the challenges of a steep surface of a site that is over 10 000 m2 with rough and extreme topographical qualities that became a design challenge. Some of the client’s requirements were: to make a single story house with a radical division between the public and private spaces and with the proper measures to favor energy saving. The site reminded us of Julius Schulman’s pictures of the 50’s modernist houses. This reference was a starting point and an inspiration to begin our design, along with the following elements as parameters: a pentagon module, which derived from a spatial diagram, and the topography.

PERFORMANCE
The inhabitants of Ventura House enjoy a space that it’s a lab of architectonic experiences where they are able to develop a pleasant, joyful, and dynamic family life. The house is greatly integrated to the landscape, which can be profited from the inside and outside of the house.