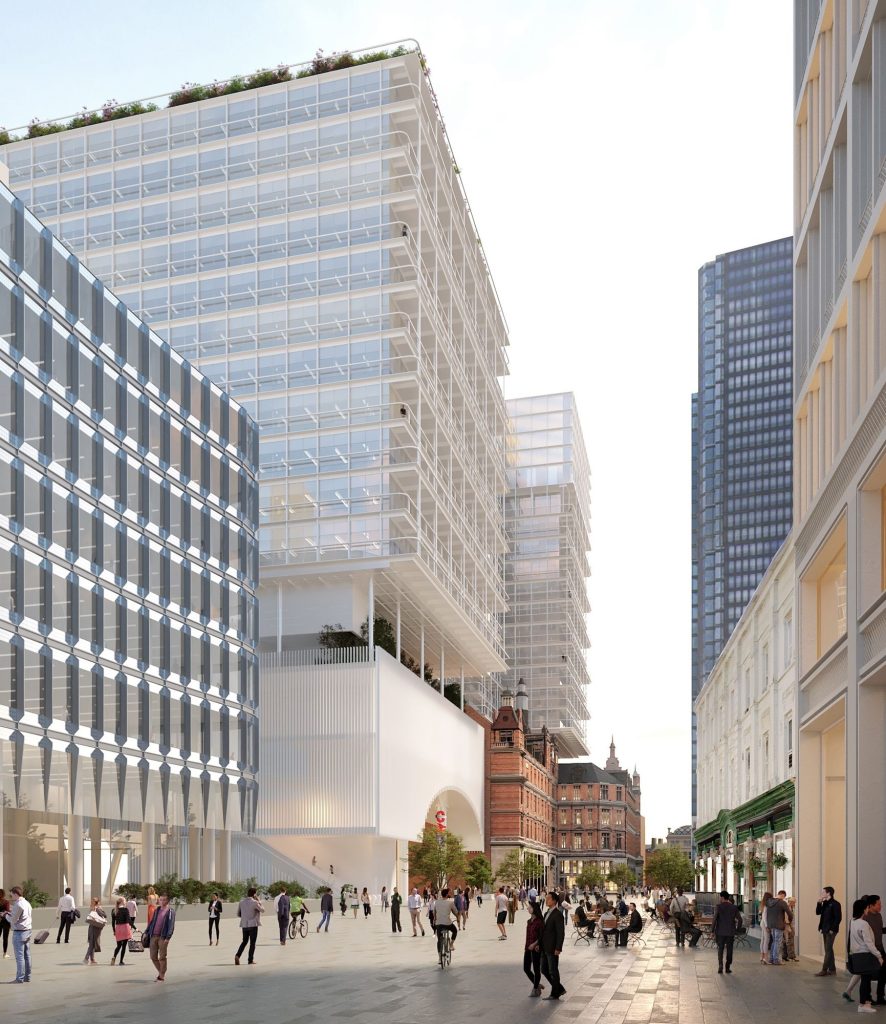 Sellar, the developer of London Bridge Quarter and Paddington Square, and MTR in partnership with Network Rail, have revealed their initial plans for vital upgrades to Liverpool Street station as part of a new sustainably developed office, retail and leisure scheme with new public and green spaces. Sellar, MTR and Network Rail are working closely with key stakeholders including Transport for London and the Hyatt, owners of the Andaz London Liverpool Street hotel adjacent to the station, to bring forward plans for this regeneration opportunity.

The vision for Liverpool Street station is being developed in collaboration with Pritzker Prize winning architectural practice Herzog & de Meuron, with the over £1.5 billion project aiming to create a world-class transport hub and landmark seven-day-a-week destination in its own right, delivering a new retail and leisure hub for visitors, passengers, and the local community.

Alleviating congestion and improving the station experience for 135 million station users a year
Originally fully opened in 1875, and London’s busiest station, Liverpool Street serves seven Underground lines, the Elizabeth line, London Overground and Greater Anglia services to destinations including Norwich, Cambridge and Stansted airport. The station underwent a major upgrade in the late 1980s and with around 135 million1 passengers passing through it annually in recent years, more than the pre-pandemic annual passengers at Heathrow Airport 2.
As a result, Liverpool Steet station suffers from significant overcrowding, poor pedestrian accessibility and connectivity into and within the station. As passenger numbers are set to increase Network Rail expect current conditions to worsen as it regularly exceeds its operating capacity. Furthermore, accessibility is severely limited with no provision for step-free interchange with London Underground and just one Disability Discrimination Act compliant lift serving the entire station.
A £450 million programme of significant infrastructure works are proposed and funded through the private sector partnership, by delivering an accompanying mixed use commercial development, which will unlock these issues and future-proof it for the years to come.
Major focus on improving accessibility and reducing congestion will save millions of passenger hours annually
Improving accessibility and speed of transit will be further improved through the provision of step-free access across the station and to all London Underground platforms. This will be addressed by increasing the number of lifts from one to seven, including six more escalators to bring the total to 10 and improving the London Underground station concourse and entrance.
Adopting a one station approach to the multiple transport modes with a clear focus on customer facilities will deliver significant improvement for passengers, visitors, office occupiers and the wider community.

Protecting and celebrating the station’s unique heritage features
Working sensitively with the station’s heritage features is also a key priority. The historic elements and façade of the Grade II listed Andaz hotel, which originally opened as the Great Eastern hotel in 1884, will be sensitively restored. The building will be sensitively and sustainably adapted so it connects to the concourse and creates a new public realm. This will also allow its historic rooms, including the masonic temples and ballroom, to be more accessible to the public, providing unique meeting, leisure, and exhibition space.
Existing memorials such as the Great War memorial and other statues will also be conserved and given more prominence. The ‘Kindertransport – The Arrival’ statue that serves as a memorial to the thousands of unaccompanied European Jewish children who fled to London on the Kindertransport in the Second World War will be restored and maintain its place in an upgraded Hope Square.
Energy and carbon efficient commercial elements to address undersupply of sustainable wellness focused office space

The plans for a new mixed use commercial development above the concourse comprise up to 10 floors of workspace below a pioneering, newly built Andaz hotel which would be operated by Hyatt and expected to be a key part of the development, as well as a new culture, retail, and leisure district.
The sustainable and wellness-focused office space is being designed to meet the high current and projected demand for modern Grade A space in the City of London that has strong environmental and wellness credentials and can accommodate the changes to working habits that have accelerated as a result of the pandemic. Initial considerations include the provision of flexible office floorplates, which will be among the largest in the Square Mile and be attractive to a broad type of customer. These will incorporate collaborative spaces, including external terraces with access to green space and biodiversity.
The plans aim to meet the highest levels of sustainability by minimising the carbon footprint in construction and operation, including the conservation of energy and water, and enhancing public health and wellbeing. An all-electrical building using innovative energy saving features that include redirecting heat emitted from the office space to heat the hotel and use a new publicly accessible pool as a massive thermal store. Water consumption will be minimised through grey water recycling and rainwater harvesting. Solar panels on the roof will harvest the suns energy to generate renewable power. The extensive planting proposed across the development provides both biophilia for the people who use the building and bio-diverse habitats.
The retained elements will be re-serviced as part of their refurbishment to modern energy and water efficient standards, vastly improving performance.
To reflect the sustainability aspirations of the scheme green building certification using the BREEAM system will be undertaken. The proposals are currently targeting “Outstanding” certification, the highest certification level possible.

A City destination offering new public realm and green spaces
The proposals also include the creation of over 1.5 acres of public realm in and around the main station building and Hope Square as well as the pedestrianisation of Liverpool Street.
A large scale new public roof garden with 24/7 access and leisure uses is also being proposed, while new leisure retail and dining offers will be included within the commercial development and throughout the upgraded station concourse.

Ensuring the station remains functioning and open throughout the development
The plans do not relate to the track-side elements of the station past the ticket barriers which will allow the station to remain open and functioning throughout all phases of the project, with minimal impact to passengers.

Sharing our plans with the public
Consultation will start with key groups over the coming weeks and initial proposals for the project, including station improvements, will be shared with the public on 21-23 November 2022 at the Andaz London Liverpool Street hotel, as part of a formal consultation exercise ahead of an anticipated planning application submission in 2023.