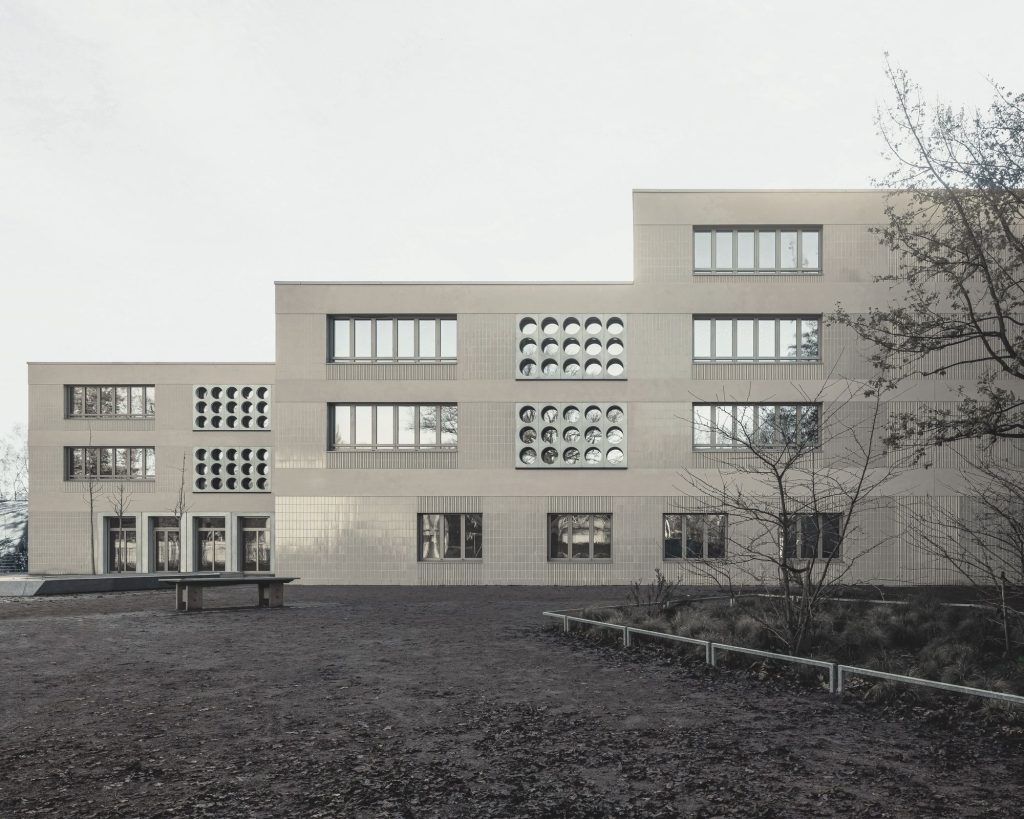 The traditional German-Russian school Lew Tolstoi has been rooted in the Rhenish quarter of Karlshorst for 20 years. The building is located in a quiet residential area, whose residential streets are lined on both sides with small-scale buildings. The existing school – a school type building SK Berlin of the GDR – is a functional wing with an appendix for the staircase and ancillary functions placed to the east. This is where the new building picks up and develops differentiated ensemble of cluster rooms at the existing school.

Both together, the existing building and the extension, rezone the urban space. As an independent building block, it forms an optimally usable and high-quality outdoor space between the school buildings and the sports hall placed at the rear of the site. On the north-east side between the existing building and the addition, a small forecourt is created, which represents the new address of the school building.
A cast aluminium sculpture welcomes the pupils. It was created by Sven Kalden and refers to a photograph of Valentina Tereshkova, the first female cosmonaut in space, who is waiting at the entrance of her space capsule, ready for take-off, to conquer new spheres.
With the placement of the building structure, it was possible to take into account structural and functional advantages such as minimal intervention in the existing building, construction during ongoing operations and, on the other hand, a dual use of the existing staircase for the extension building as well. It is therefore logical that the extension continues the storey structure of the existing building. However, it reduces the cubature to a compact 3-storey building. All storeys of the old and the new are connected with each other.

The monochrome façade is given a textured effect through a variation of different surfaces. Glazed and profiled tiles alternating with matt plaster surfaces are subdivided by large-format moulded concrete elements and ribbon window sections. The floor-to-ceiling glazing and entrance areas are articulated and protected by perimeter concrete walls.
The floor plan organisation of the new ground floor continues to maintain the existing main access on Römerweg. At the same time, a new “school street” is formed that connects all development components, old and new, public spaces and schoolyards, as well as their entrances. The school’s special uses are located along this street. The now merged administration is located with a good overview at the entrance area and the playgrounds. The refectory has the option of using the outdoor area. The two upper floors house all the rooms for general instruction with support and group rooms. These have been deliberately arranged in an interplay to ensure short distances and synergies between teaching and after-school care. This creates varied circulation areas with a quality of stay for break times, which are accentuated by seating areas and views of the schoolyards. The sculptural façade elements also reveal these open meeting spaces in the façade.
_