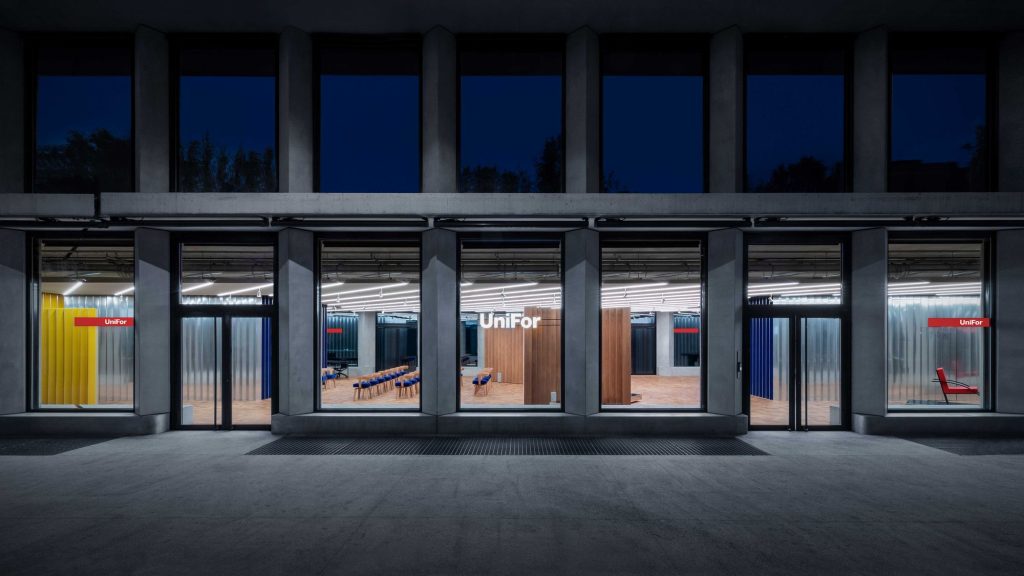 Following the debut during Milan’s Design Week in June 2022, the new UniFor showroom opens its doors in Herzog & de Meuron’s Feltrinelli Building, located in the Porta Nuova district. The design is not only a space to present products, but also a window into how UniFor works – the showroom itself becomes the exhibit. The flexible design, specifically conceived and developed together with UniFor features a single 90-degree extrusion profile and panel system that can be configured in many ways. It can be used as a wall cladding, a free-standing screen, moveable partition wall, or shelving system.

Rather than competing with the simplicity of the architecture of the building, the showroom is designed as a fully integrated space. It extends the main themes set by the building – scale, structure, repetition, and its precise position in the urban context. The structural skeleton, the repetitive rotated square column, and the angular cut by 45 degrees express the geometrical conditions of the site while also forming a base for the interiors of the showroom.

On the occasion of the inauguration, a finger-jointed solid oak chair conceived by Herzog & de Meuron Atelier with Jacques Herzog was premiered. A slightly adapted version of the chair will be used in the reading room of the National Library of Israel in Jerusalem, set to open in 2023.

The project confirms the long-term partnership between Herzog & de Meuron and UniFor, whose first collaboration goes back to 2012, with the Novartis Campus in Basel.
_