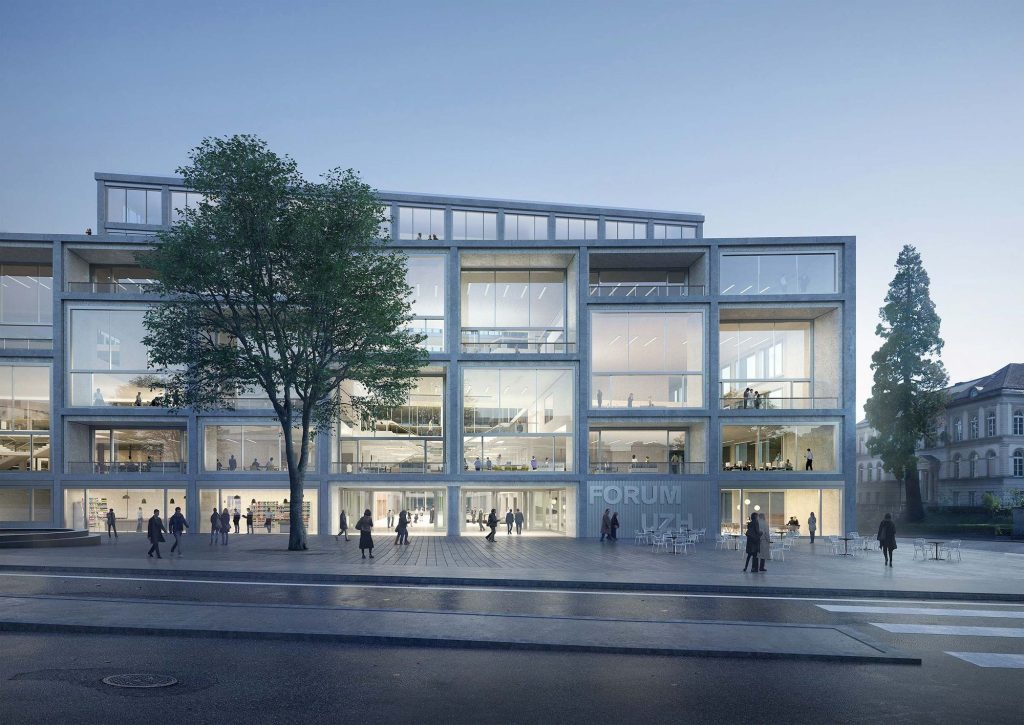 The new Zurich University Forum plays a leading role in the university district. In urban planning terms it is intended to define the planned Gloriapark, to become part of the ‘culture mile’ along Rämistrasse, and to provide a convincing transition to the more fine-grained scale of the adjoining district.

In our project these aims produce three central urban planning parameters: the differentiation and activation of the different sides in response to the outdoor spaces, the creation of a public ground floor and a generous degree of permeability on the site, as well as breaking the volume up into two independent buildings in order to create a transition to the scale of the quarter.

To give Gloriapark a strong counterpart, we formulate the Forum as an elongated, inherently calm volume with a gentle curvature that defines the park. The eaves line of the Forum relates precisely to the existing buildings in the surroundings. In urban planning terms the taller volumes of the planned university hospital building and the existing high-rise nurses’ home clearly retreat to the second row.

On the culture boulevard our Forum emanates a comparative clarity and calm to its neighbours. Analogous to the university library, the Forum building addresses the street. Therefore, we create a straight eaves line without any form of sculptural accentuation at the road junction. The formulation of the Forum’s two-storey internal foyer represents a response to the cramped spatial situation along Rämistrasse.

The Forum reacts to the neighbouring quarter by exposing the sports hall as an independent free-standing building. Consequently, together with the university library an ensemble of three buildings is created, with a high degree of urban permeability and an appropriately scaled transition to the adjoining district.

The internal idea of the Forum also responds to this key urban position. Rather than using the inverted gesture of a hall concealed in the interior, we are more interested in the concept of a topographically positioned, porous spatial structure – not primarily as a place of representation but as a spatial vessel that serves the production and exchange of knowledge. This open sequence of spaces is intended to radiate outwards into the city and to explicitly emancipate itself from classic categorisations of space as either circulation or usable floor area. In this landscape places of quite different kinds are to be found, generous but also intimate, collective as well as individual. Therefore, the expression of the building, with its halls, landscapes of cascading staircases, terraces and diagonal spatial sequences, and various spatial shapes and circulation figures, can be read in a variety of ways. It cannot be grasped in a single glance but must be discovered gradually, piece by piece.
_