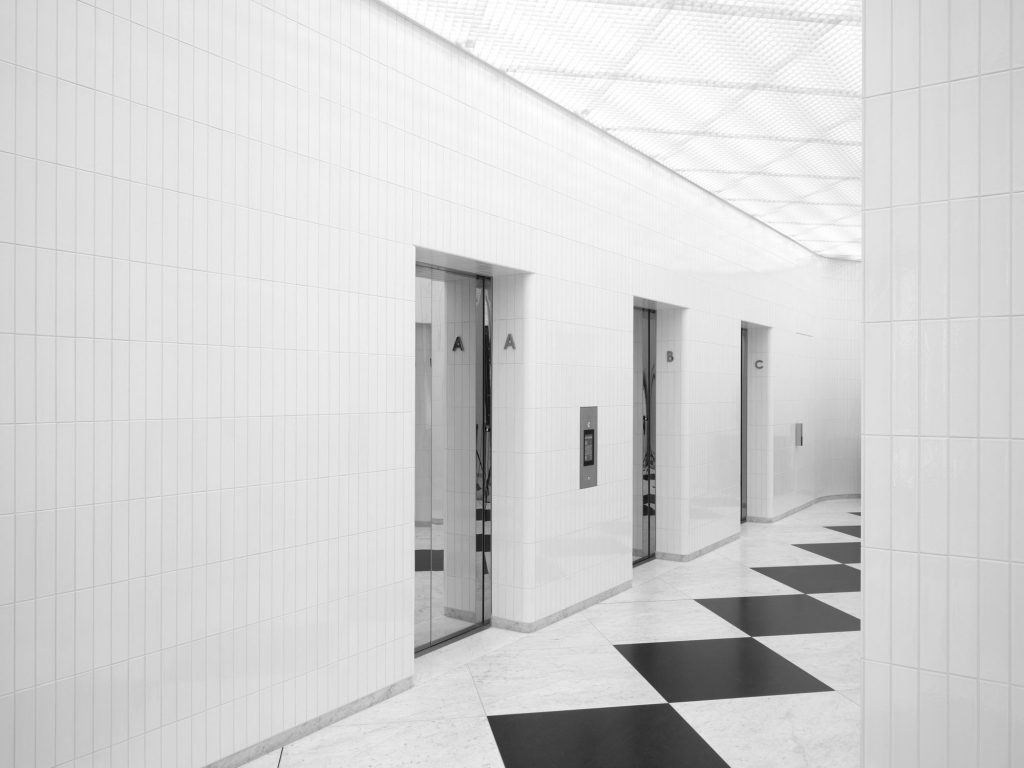 UK House, a mixed-use building located at a prestigious West End address on Oxford Street, stands out as a landmark in the city center. Built in 1906, the grade II listed building was adapted in the 1970s and became an office block. Two of its original facades remain, revealing a playful composition of baroque forms and Edwardian elements. By contrast, the other facades exhibit a modern style.

The Edwardian scale and grandeur of the historic facades set the building apart and speak of an age of British history when the highest global ambitions were manifest in the city’s physical fabric. Christ & Gantenbein worked with this past to generate its vision of corporate architecture in the 21st century: bold, futuristic, open, communicative, yet steeped in history.

SThe lobby’s entry features large windows clad in bronzed metal which blend in with existing retail facades on Oxford Street. Revolving doors in chromed stainless-steel establish a relationship with the mirrored columns inside. Installed on the right wall of the lobby, an artwork by Wolfgang Tillmans corresponds to the exterior and the interior alike.

The space of arrival consists of a front desk and an ancillary space for meetings and exchange, with an adjacent coffee point. The lobby walls formally reference the Baroque curves of the UK House facade, and its “apse”-like endings prevent abrupt confrontations. Polished chrome elements, such as circular columns or elevator doors, continue throughout. In an apparent historical reference, a combination of white and black stone forms checkered marble flooring. The suspended metal grill ceiling includes linear light that follows the area’s primary spatial directives. Bespoke ceramic tiles cover the walls, richly textured, but subtle and neutral in color, devising a robust backdrop to the dramatic forms of the new lobby.

Connected via new staircases and elevators, the unique blend of hyper-modern and historical elements continues below ground. Epoxy floors with a black and white pattern demark the cycle route and lead to the bike store. A changing lobby, the central space for tenants arriving on two wheels, is defined with circular accents. Adjacent facilities with showers and lockers provide functional, yet luxurious facilities. An informal array of objects designed by Christ & Gantenbein is strategically placed throughout these areas. British Renaissance and Baroque architecture once again influenced their forms, shapes, and colors.

Christ & Gantenbein’s lobby design for UK House in London responds to the increasing need for communicative and accessible corporate architecture. Addressing both tenants and a broader public, this highly visible and dynamic new space welcomes a multitude of users into a groundbreaking place of arrival, a first of its kind in London.
_