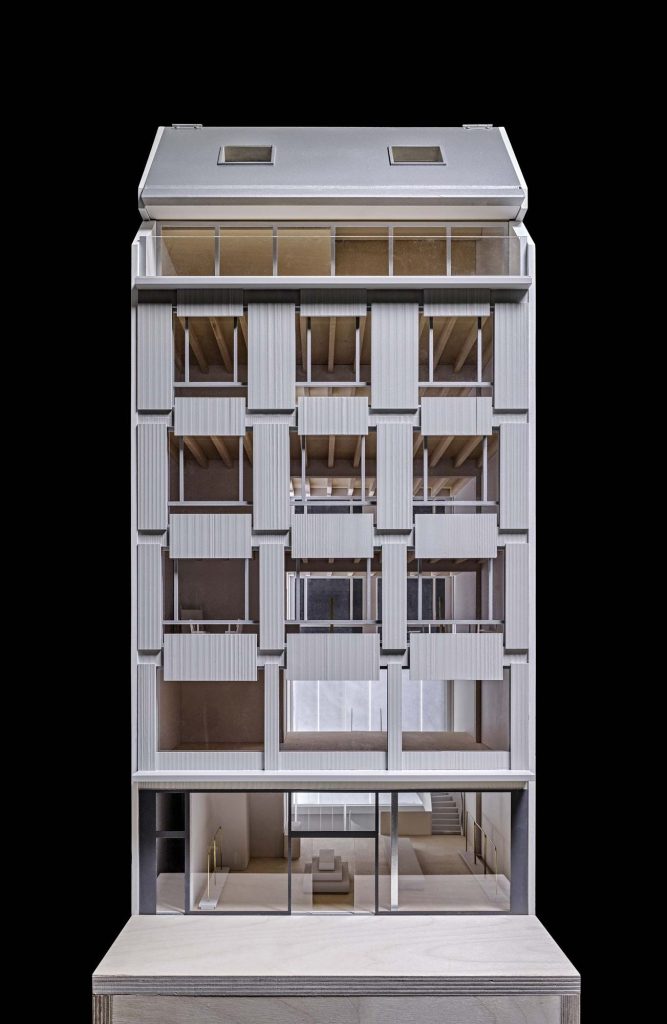 Bahnhofstrasse is Zurich’s premier address and one of the most exclusive shopping streets in Europe. Although the street has many modern buildings and the retail premises are subject to a constant dynamic process of change, the dominant image is still that of the stony city. Therefore, the new building was required to be modern, yet also classically elegant, with a structure that would allow it to be used flexibly over a longer period.

The volume and roof form of the new building relate to the neighbouring buildings that make up this densely developed urban block. Together, the elevations of the four properties can be read in a variety of ways: as regards the openings of the neighbouring buildings one can speak of an a-a-a-b rhythm: three ‘hole-in-the-wall’ facades are followed by a curtain wall. As regards the materialisation an a-b-a-b rhythm is created, with alternating plaster and steel facades. This ambivalence offered the starting point for the design of the new facade, which employs the principles according to which natural stone elements are layered and joined. Although through its plasticity and the shadows that it casts the ambivalent facade relates to the neighbouring buildings, it seems both solid and light, allowing it to be read as a curtain wall but also as a traditional punctuated facade.

On the facade, the vertical stone slabs become wider from the bottom floor upwards, while the horizontal parapet slabs become narrower. This creates a facade relief that grows denser from bottom to top, responding in an uncomplicated way to the plinth zone of Bahnhofstrasse. Dividing the facade into three bays allows a self-assured fenestration to the street outside, while inside spaces with a feeling of generosity and expansiveness are created. A slender canopy above the ground floor unit helps integrate the building in its context and further strengthens the facade’s sculptural quality. The courtyard elevation is interpreted as typical backyard facade, which is developed far more directly from the requirements of the spaces in the interior. Like in the neighbouring buildings this ‘hole-in-the-wall’ facade is plastered and painted.

The structural system of this new replacement building is developed from the givens of the site and the existing buildings. To ensure that the foundations and the existing watertight basement can continue to be used and to avoid any major interventions there, the new building is a lightweight hybrid of wood and concrete. Wood-concrete composite ceiling slabs carry the loads from the facade beams to the central beam. In combination with the central beam and ridge restraint beam a short earthquake wall suffices to divert earthquake forces transverse to the building. The staircase is a lightweight steel construction inserted in the stairwell, where artist Benoît van Innis used sgraffito technique to create an artwork on the plastered walls.
_