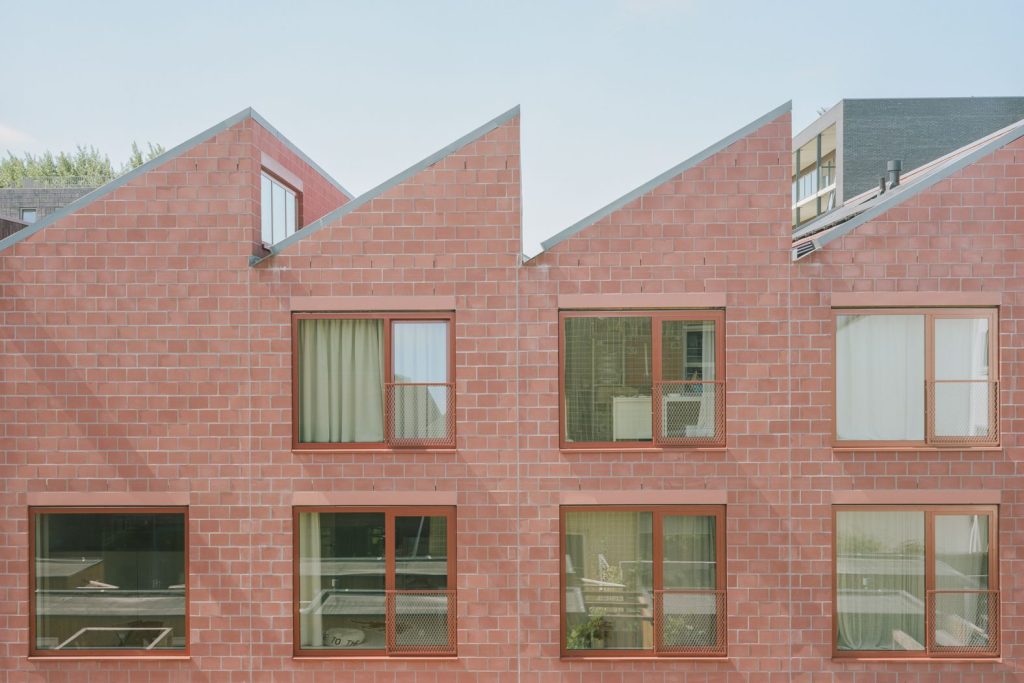 On the edge of the historic city centre of Utrecht, tucked away between the railway tracks and the Tweede Daalsebuurt, the former Werkspoor terrain can be found. The Wisselspoor neighbourhood is part of the larger transformation of the Werkspoor area into a new energy-neutral housing and inner city densification district. Space Encounters designed a collection of buildings ranging from single-family houses to an apartment block for the first phase of this urban development. These buildings are situated in a master plan that was designed by Studioninedots. Studioninedots also designed the parking garage at the centre of the plan, which is a transformation of a former factory building, while Mees Visser, Zecc and Space Encounters designed the new dwellings.

The master plan prescribed that all individual houses were to be materialised as part of larger ensembles. By slightly blurring the distinction between the whole and its parts the attention is shifted from the individual to the collective, providing these relatively small housing blocks with a solid urban presence. While, contrastingly, the housing designs of Mees Visser and Zecc are quite restrained in terms of material and colour palette, the architecture of Space Encounters could be more expressive. This was achieved through a refreshing take on traditional Dutch terraced houses by using different, unconventional materials for the separate plots assigned to the office.
Nevertheless, all houses, apart from the apartment block, have, in essence, the same floor plan layout, which unifies the whole. By eliminating the typical hallway from the ground floor plan a simple yet spacious enfilade layout was created, which consists of a garden room in the back and a living kitchen on the street side. Both rooms are joined by a service zone containing several amenities and storage space. This generic typology provides maximum flexibility and has been sculpted and materialised in various striking ways throughout the plan, setting the individual houses apart with their facades and relationship with the street, resulting in cost-optimised yet high-quality housing.

Most of the houses are ‘twins’, while there is one strip of three houses and one strip of four houses. In the design of the different sets of houses, a diverse collection of architectural elements and whimsical details have been embedded. Hence, there is a set of twin dwellings that has been materialised in red tiles with a gradient of tile sizes and another set has been materialised with an aluminium sheet facade and a panel of polished stainless steel that functions as a mirror. There is a set of twin dwellings with grey concrete blocks and expressive steel balconies, a set with a Ceppo di Gré natural stone facade and a set with yellow tiles, which provides the neighbourhood with a bright dash of colour.
The strip of three houses is a ‘drie-onder-vier-kapper’, which could be considered a new typology, in which the bayonet floor plan introduces a diagonal movement in the floor plan of the dwellings and allows for the playful window composition in the facade. Moreover, the houses are materialised in red concrete blocks and are adorned with striking, pronounced rainwater gutters. The strip of four houses consists of three houses that have been designed with concave, corrugated aluminium facades and on the corner, a pitched roof house with yellow tiles is situated that works as an anchor point at the intersection of two streets in the plan. The apartment block has facade openings that subtly vary in size, blending the distinction between doors and windows. The building has been materialised in nacre tiles which make it the shimmering pearl of the new neighbourhood.
_