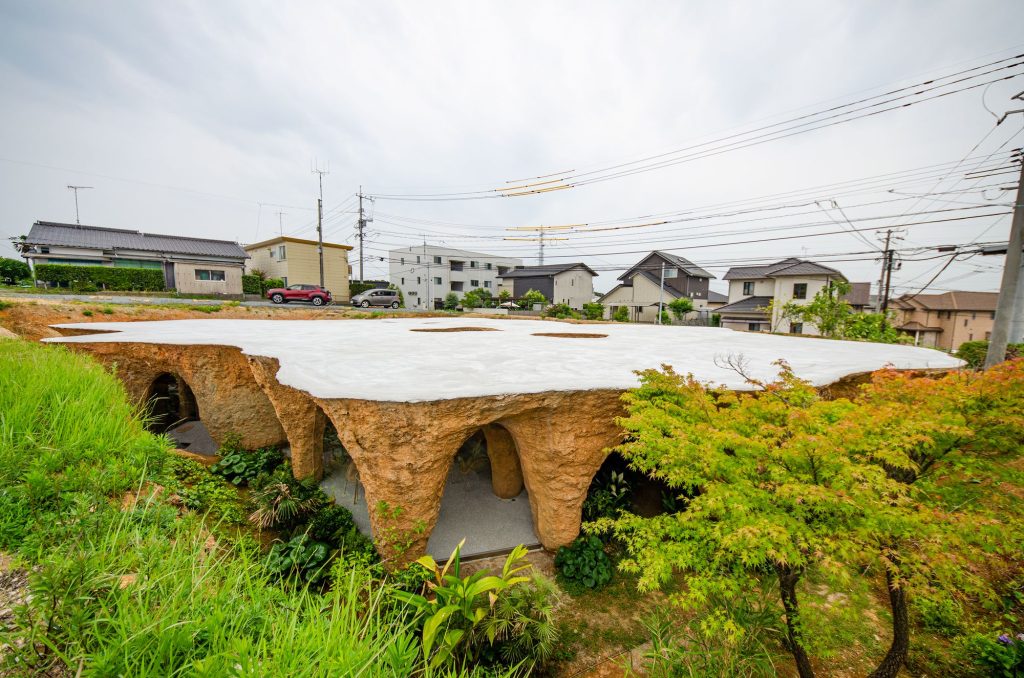 The project is a residence/restaurant for a French restaurant owner. He is an old friend of mine, and he was the one who commissioned the Tables for a Restaurant. I was asked to design a building as “heavy” as possible. “I want an architecture whose heaviness would increase with time,” he said. “It cannot be artificially smooth but rather something with the roughness of nature. Authentic cuisines require such a place.” He also told me that “it has to look as if it has been there and will continue to be there for the longest time.” His idea was to create a brand-new long-established restaurant. He was longing for something that is both a house and a restaurant, something he could pass on to his children and grandchildren. Now, he invites guests to the restaurant as he would invite friends to his house, and with someone special, he would let them into the living room or even stay overnight. When the restaurant is closed, the hall serves as a place for the family to spend time or for the children to study. The plan is arranged with the restaurant on the north and the residence on the south. To go back and forth between the spaces, they can walk through any one of the three courtyards that separate them.

In terms of construction, we conceived a process of constantly sharing, accepting, and referencing the un-precisions and accidents that occurred on the site to create an architecture that internalizes natural distortions and uncertainties. More specifically, we dug a hole in the ground to pour concrete, excavated the volume, and fixed glasses to create interior space.

First, a mass model that went through countless modifications was converted into 3D data. The 3D coordinate data was then input into a total station (TS) survey instrument to determine the points utilizing a navigation system for pile driving. At the same time, construction workers dug the hole manually for precision while constantly confirming the position and shape on an iPad. Unexpected factors such as growing grass, soil collapsing, or errors due to manual labor were tolerated as much as possible. When the structure was excavated after concrete solidification, it was caked with mud. With the range in geology, the nature and appearance of the soil differed from place to place. We originally planned to wash away the dirt to reveal a gray concrete structure. However, we were impressed by how it looked with soil that we decided to leave it as it is. It was then that we sensed the atmosphere of a cave and decided to redesign the building with a new image.

In designing the interior space, we visualized in 3D images the differences between the design drawings and the actual surface coordinates of the excavated structure. This process revealed new spaces that we had not anticipated to emerge from the overlapping discrepancies. We discovered such places and updated the way to inhabit the architecture accordingly. Thus the architectural design process was flipped, to reference the structure to determine the designs including the placement and number of glass pieces, arrangement and size of the furniture, and positions and details of MEP facilities. For example, where to fix the glass was adjusted based on actual on-site measurements, and 3D scan data was used to verify that the glass would not break by hitting the structure during the construction nor by opening/closing, and to adjust the position of the hinges. To simplify the plumbing route, the water supply and drainage were planned to pass through the three courtyards in a straight line, and faucets, drainage pipes, ventilation ducts, etc. were installed to penetrate the glass windows into the rooms.

Accepting uncertainties, the concrete mass will gradually be transformed into architecture through cut-and-try. The owner will start a life here, run a restaurant, and continue to renew this place.