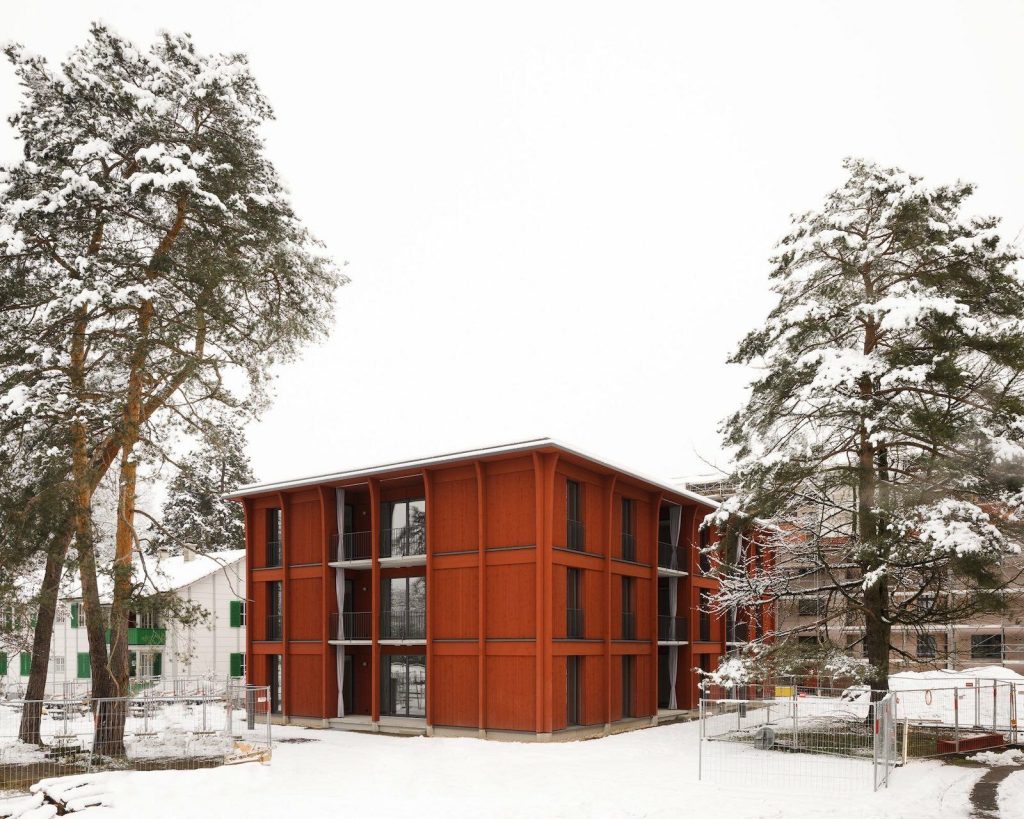 The Hirtenweg project is the result of a total contractor competition for affordable housing that was initiated by the public developer, Immobilien Basel-Stadt, in 2018.

The new buildings at Hirtenweg integrate existing conditions – residential scale, natural surroundings, neighborhood amenities – to create a renewed, densified residential estate. The setting of the three buildings was derived from overlapping setbacks, preservation of significant tree clusters, optimization of flat orientation, rational flat layouts, the reuse of existing foundations and the necessary phasing for the implementation.

Dense living requires a careful equilibration of lively communal spaces and secluded private spaces on a constrained footprint. The new buildings respond to this request through a considered allocation of public and private spaces, activated circulation areas and opportunities for privacy in both interior and exterior spaces.

The wild meadows on the protected slopes of the site get extended over the plateau. Native perennials, wild shrubs and bushes structure the space in height and depth. The tree canopy – composed of existing trees wherever possible and new plantings – offers visual protection and shading in the neighborhood garden, creating an inviting space of retreat that contrasts the project’s density.

The buildings are set apart from their surroundings by slightly raised ground floors and are accessed by open staircases and arcades leading to two or three flats on each side. The arcades offer spaces for communal seating and play as well as spaces for individual appropriation at the flat entrances.
Flats are accessed via entrance niches into the kitchen areas. Depending on the mood of the inhabitant the windows to the arcades allow for a more or less open relationship. The view from the arcades only extends into the depth of the first room; the actual living area with its adjacent loggia is offset by one axis and is thus secluded. Diagonal visual relationships create spatial generosity and an intensive exchange with outside spaces despite the compact floor plans.

The facade combines an elegant filigree structure with an economical grid. Glulam columns support the arcades and roof overhangs. The rounding of the columns traces the geometry of a capital, giving the buildings a clear boundary and, in combination with the strong color scheme, a clear identity.

The basement levels of the new buildings are arranged in such a way that they coincide with the volumes of the basement volumes of the dismantled buildings in order to reduce the excavation and in effect significantly reduce transport costs and emissions. In order to keep energy consumption as low as possible, compact volumes were developed with externalized, unheated access spaces. Balconies and arcades serve not only as living areas but also as passive sun protection.

To ensure both sustainability and speed of construction, a high precision prefabricated modular timber structure with a good sound insulation and a clean separation of primary, secondary and tertiary structure was erected on the concrete basements. The low noise emission and the speed of this construction method are an advantage in the context of the surrounding occupied buildings and the necessary project phasing.

The first of the three buildings was constructed between May and December 2020 and was occupied in February 2021. The second building will be completed in 2021 and the third in 2022. Due to the phased construction, the tenants of the replaced buildings can move into the newly completed buildings, and can thus remain on their familiar site.
_