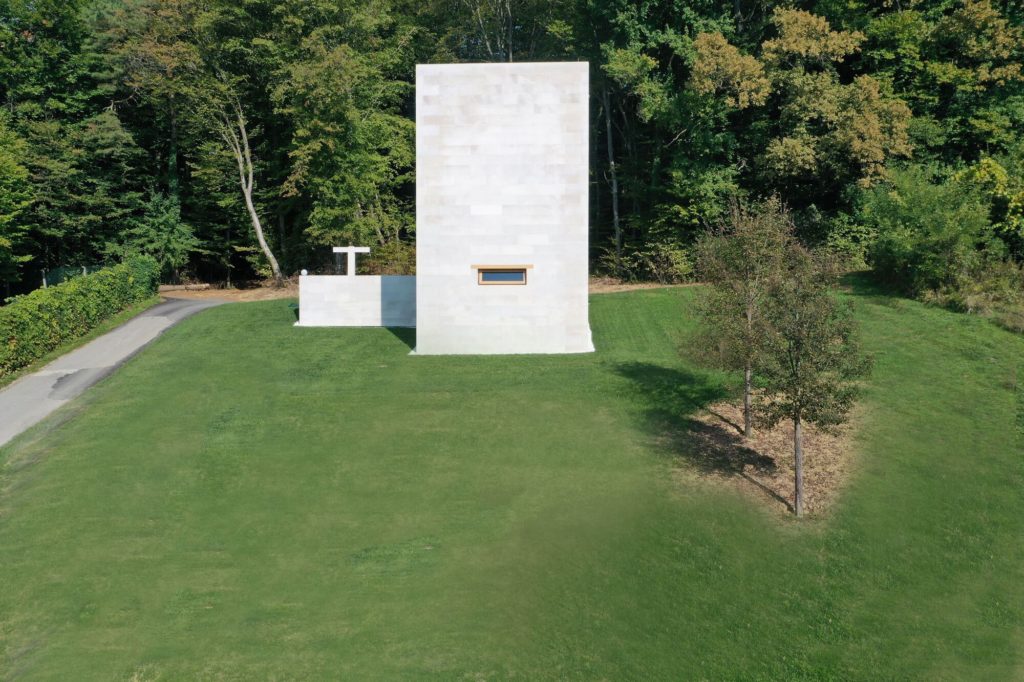 On 9 May 2009, a first-class cultural event took place in Zagreb, Croatia – Kenneth Frampton opened an exhibition of drawings by Álvaro Siza.

The Art Gallery was not large enough to accommodate all those who were interested – drawings were exhibited in which Siza sought the final expression for the chapel. Twelve years later, the chapel was finally executed for the investor, in a landscape of Hrvatsko Zagorje, within the park of a castle – the Baroque Miljana.

A monolithic, almost completely enclosed volume lined with limestone slabs, was built into the slope of the highest part of the estate. This closeness to the environment indicates the ascetic introversion of the chapel. However, the architect designed a transitional area between the natural and the artificial as a terrace – a piazzetta – with a view of the hilly Zagorje region and rows of bluish mountain ranges in the background. The more one will feel the transition to another world – the world of meditation and spirituality. The edifice itself is marked by the duality of its materiality: the outer borders made of natural, cut stone material and the inner skin of cast concrete. In terms of reduction to the most basic, the technology of making visible concrete determines the image of the interior. The only “decor” is the formwork of the shell and recesses for its fixing. The strict purity of the author’s approach might perhaps remind us of early Christian church buildings; in terms of tradition the past is immanent in the present. Clearly, there is no doubt about the modernity and even the actuality of exactly such minimalist design.

Natural light enters only through a very low horizontally placed opening behind the altar, so artificial light plays a major role. Siza designed it in such a way as to enable the visitor to orientate, but above all to definitely create a space and make a very special, backed away, certainly also stimulating atmosphere. In this sense, Walter Benjamin’s thoughts on art as a cognitive medium could be applied to the chapel in Miljana.

The architect-designed all the church equipment in accordance with the whole idea of the chapel – precisely and consistently, without anything superfluous or likable. Dominant is certainly the wooden cross whose shape evokes an association with the crucified Christ, reminding us of the cross in the famous Church of Santa Maria in Marco de Canavezes, one of Sizaʼs most important earlier works.

As in this sacral building, there are also two scales in the Miljana chapel – the scale of man as the individual and the scale of the world. The broken concrete structure next to the entrance portal symbolizes the human scale – at the same time the eaves and the niche and the bench. This enables a protected entrance to the 8-meter-high space, which, thanks to the direction of artificial light, does not seem definitive. With his completely personal poetics, Álvaro Siza created a sacral space in Miljana that is as individual as it is universal.
_