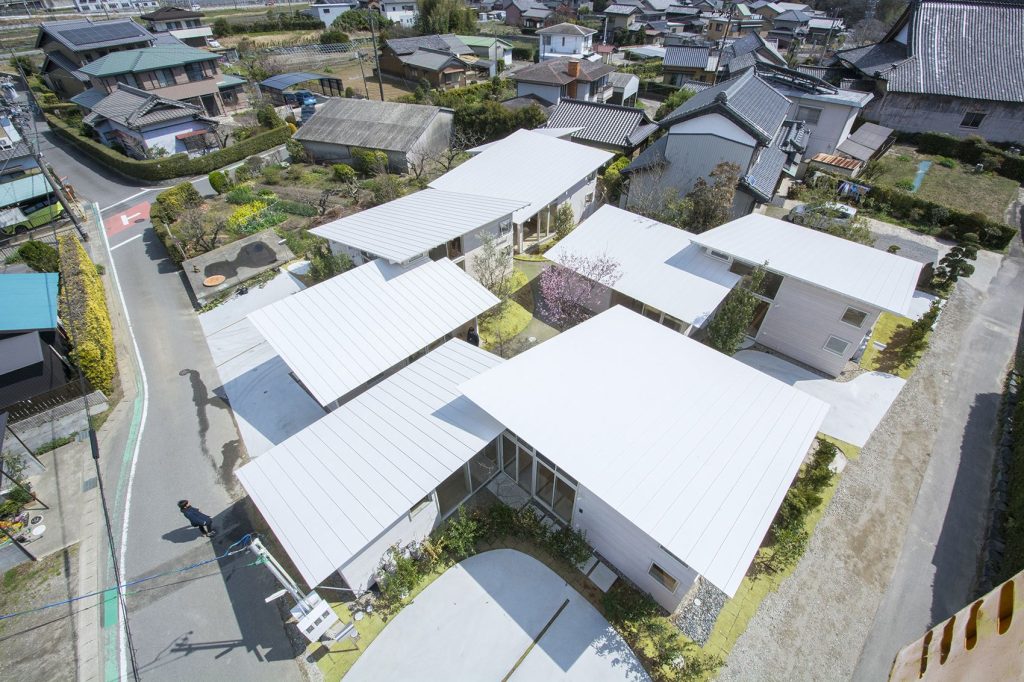 Four houses for rent in Koda-cho, Nukata-gun, Aichi Prefecture, located in an area far from the city center with an impressive landscape of beautiful woodlands, temples, fields, curving paths, streams and hedges. How could these locational elements be connected to life? At the same time, the real estate agent told us that the rental stock in this area was already saturated with regular apartments and condominiums. So, we began to conceive that we could rent out a comfortable life here, taking advantage of the rich environment, which spurred the idea of “lending”: Lending a room → Lending a building → Lending with land → Lending an existing well, lending a field next to the main building → Supporting the farm work of the parents of the main building, then, “renting the environment”, which eventually led to “renting the environment” including human relations. Each wing of the building has a loft, and the windows of every floor has a view of the back mountain. The height and position of each building and the direction of the roof slope are determined so that the views do not overlap with each other and interfere with the line of sight from the loft floor.

Four materials that were left over on the site are given a new life: the stone from the existing stone wall once piled up along the site as soil retaining walls now line up on the northeast side to prevent the ground from falling; The pillar and beam material from the existing house are reused as benches along the outer wall and around the waterways; The hedges, which are common in the area, are transplanted to help regulate the flow line and to ensure privacy.

The water quality of the old well, which is no longer in use, was tested and a rowing pump was installed to make it usable. Groundwater from the old wells is drawn in a gentle curve along with a nearby stream, and rainwater from the roofs of the wells is collected and drained by a “waterway” that goes around the site. The “waterway” also serves as the boundary of each building’s site. Furthermore, it can be used as an emergency water supply in the case of a water cutoff. From the second floor of the main house where the owner spent his high school years, you can see the sea in the Pacific Ocean. The surface of the waterway formed on the site wavers in the sea breeze.
_