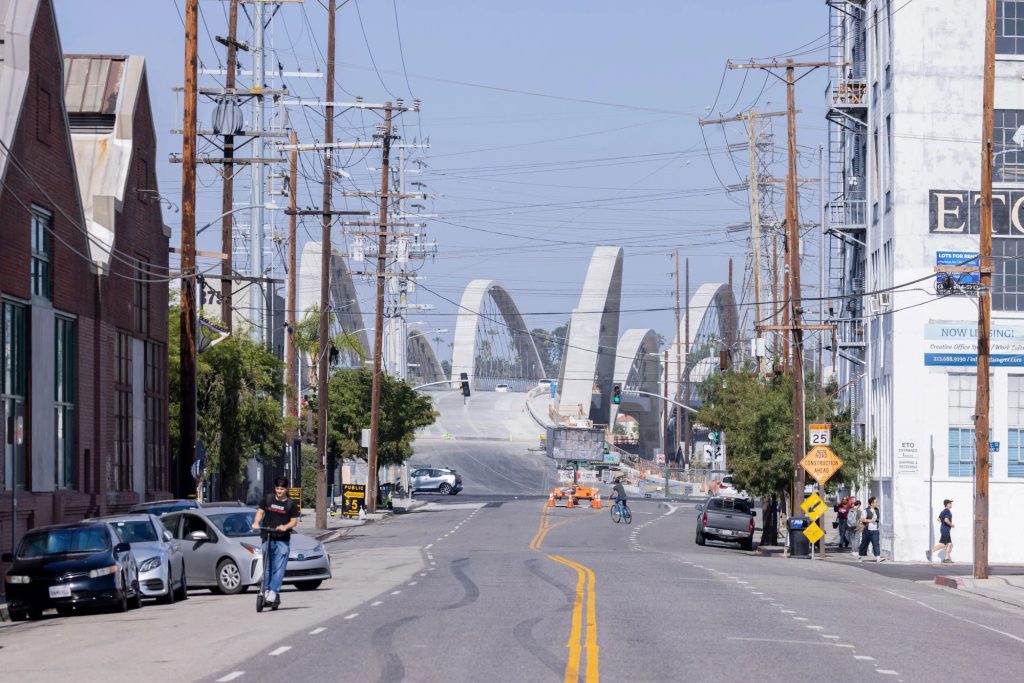 The new Los Angeles Sixth Street Viaduct is a transformative infrastructure project for the City of Los Angeles. It will replace the original 1932 bridge, and unite the Boyle Heights community to the east and the Arts District and Downtown to the west. The design is the product of an international design competition led by the City of Los Angeles Bureau of Engineering. The decision to conduct a design competition, an unusual approach to an infrastructure project of this magnitude, emphasizes the City’s collective commitment to making the new Sixth Street Viaduct an iconic and lasting landmark for Los Angeles.

The design team including Michael Maltzan Architecture (Design Architect), HNTB (Engineer and Executive Architect), Hargreaves Associates (Landscape Architect), and AC Martin (Urban Planning) began with the fundamental understanding that the Viaduct is more than a simple replacement thoroughfare crossing the Los Angeles River. The project instead foresees a multimodal future for the City, one that accommodates cars, incorporates significant new bicycle connections. It also increases connectivity for pedestrians to access the Viaduct, not only at its endpoints, but along the entirety of the span, linking the bridge, the Los Angeles River, and future urban landscapes in a more meaningful relationship.

The viaduct design is equal parts engineering and architecture and is defined by ten pairs of arches, rising and falling along the north and south edges of the bridge as it extends from east to west. These pairs of repeated concrete arches and cable supported roadway deck are simultaneously elegant and efficient. The design approach unifies and optimizes the architecture of the viaduct through repetition, creating a unique configuration through the repeated use of arches, roadway and pier forms: an iconic structure. The arches incline outward from the deck and are constructed segmentally. The repetitive pier forms beneath angle outward in plan, resolving the geometries of the bridge’s inner and outer profiles. The bridge deck, suspended from the cable lattice at its perimeter, is a highly efficient, thin profile. Because the viaduct’s spans are similar, foundations at each pier are also nearly identical, further improving efficiency.

The structure’s generous spans create large areas of open space below that will become new recreational green spaces. There will be 5 pedestrian stairways along the length of the 3,500 foot Viaduct connecting the bridge level with the ground below. This strategy enables a more significant degree of connectivity with the ground plane and a less prescriptive approach to landscape that will allow for expanded flexibility overtime. A wide range of public activities and open space will be created under the eastern portion of the viaduct in what was an industrial zone. There are also two bike ramps for cyclists, with one ramp to the west and the Arts District, and one to the east and Boyle Heights. A new sloping River Gateway path will link the River
_