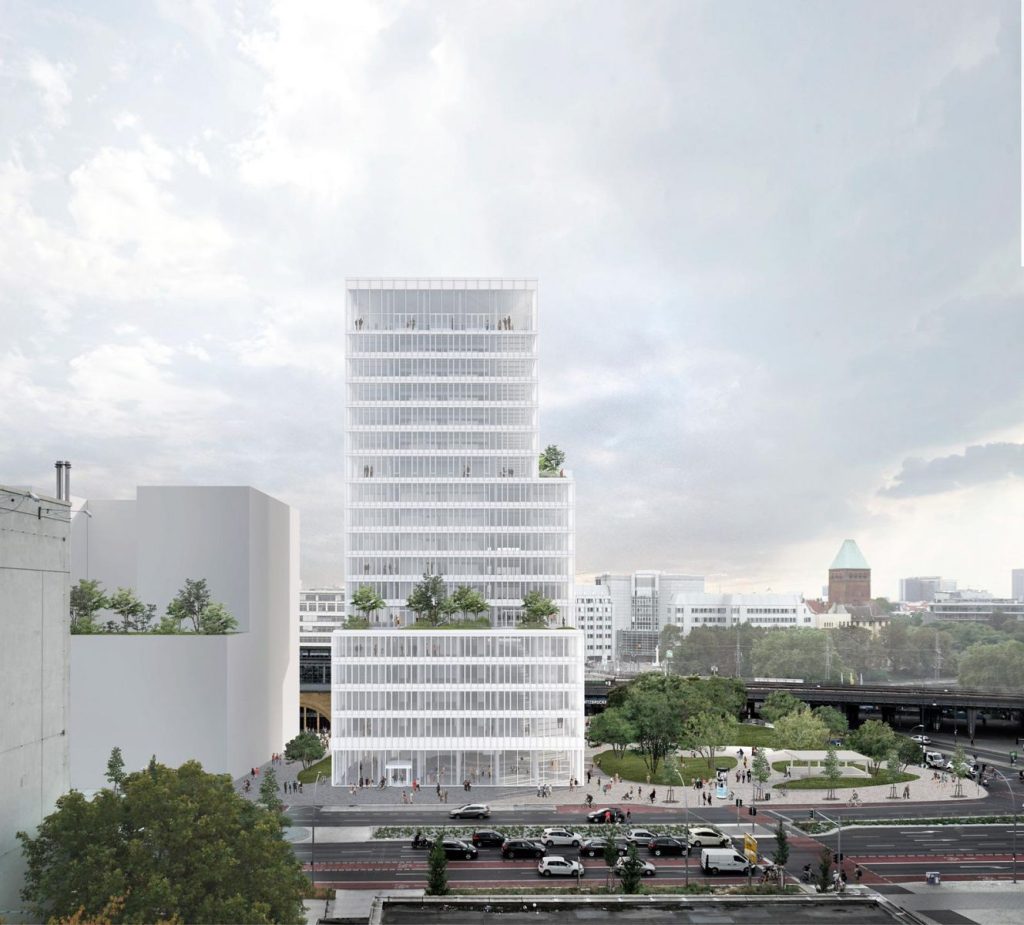 Three buildings are now under development at Jannowitzbrücke in Berlin’s Mitte district, including a tower designed by David Chipperfield Architects Berlin. The ground-breaking for the overall project was celebrated in a ceremony on 16 June.

At Berlin’s Jannowitzbrücke station, a transport hub in the district of Mitte, different urban typologies converge at a bend in the river Spree. It is in this urban context that a new, prescient around 75 metre high office tower will be erected. The Jannowitz tower, along with the adjacent Holzmarkt-Kontor and Holzmarkt 5, designed by Kuehn Malvezzi, and the existing railway viaduct, form a new ensemble along Holzmarktstrasse. The tower interacts with its immediate surroundings to form a lively urban public space, and its unique sculptural form, visible from afar, makes it an urban landmark.

The compact building volume is modulated in such a way that projections and recesses create distinct contextual references to the neighbouring buildings. Landscaped areas such as roof terraces and the new ‘city square’ in front of the building form an integral part of the design. On the ground-floor level of the entire ensemble, a continuous stone paving pattern interlinks the individual outdoor spaces, which are interspersed with green islands, shady trees and hedges, and integrated seating areas.

The site’s sloping terrain continues through the ground floor of the tower as a modulated topography of curved steps, resulting in a fluid transition between inside and outside. Hence, a coherent space is created extending from the station entrance down to the lowest point, where a new passageway along the railway viaduct commences. The tower’s ground floor includes entrances on all four sides. In its function as a public space containing a café, event and co-working zones, it connects the urban surroundings to the upper floors. These levels house spacious office accommodation with plentiful daylight, making it possible to set up flexible, contemporary work environments in a wide variety of arrangements. The publicly accessible Skybar situated on the top floor offers a magnificent panoramic view of Berlin.

Low-tech strategies and the cradle-to-cradle approach were integral to the city tower’s sustainability concept. The scaled back use of simple and easily accessible technologies results in a highly efficient building that utilises resources responsibly whilst ensuring usability for future generations. Starting with the load-bearing structure’s conception as a flexible basic module, the building has been designed to consistently incorporate shearing layers with varying life cycles, whereby the use of recycled and recyclable materials has been prioritised.

The diaphanous façade with an opacity of 40% is externally clad with a brise-soleil comprised of deep horizontal and vertical aluminium profiles, passively protecting the building from unwanted solar gain. The brise-soleil additionally creates an interplay of light and shadow, transparency and impenetrability, which vary according to the observer’s point of view, the time of day, and season. In the public areas, the façade opens up via expansive glazing. A layer of Photovoltaic panels simultaneously constitutes the roof and the fifth façade.
_