IN FRONT OF THE IMPOSING LANDSCAPE . Torrelodones 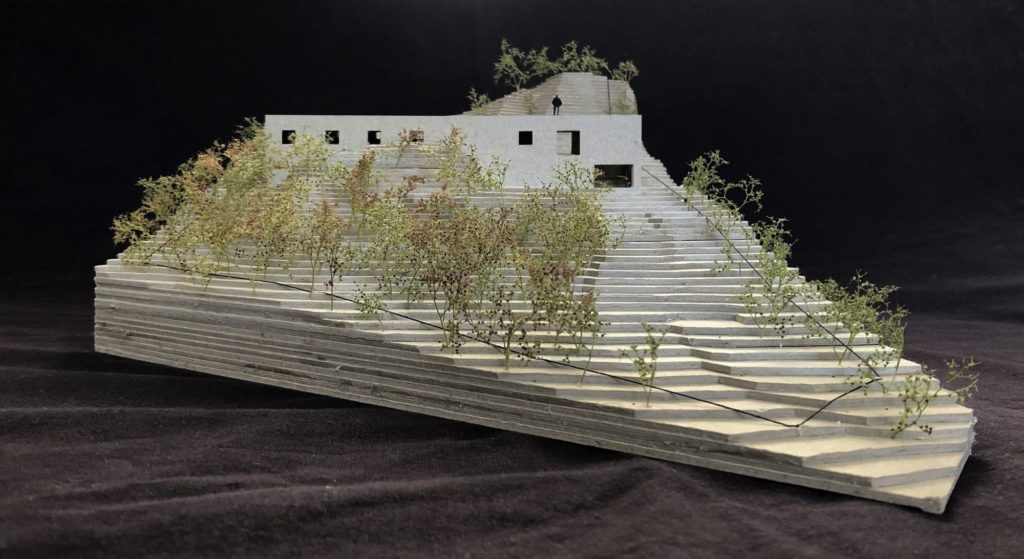 Once again, a house that is not just another house.

Once again, we would like to make the most beautiful house in the world.

The land, in Torrelodones, is a privileged site in the foothills of the Sierra de Madrid. With powerful rocks that emerge giving the place a great strength that we would like to see reflected in our house.

The house is a long rectangular rectangular straight parallelepiped of reinforced concrete, which crosses from side to side the plot in the simplest way. In a way that not only respects but also enhances the value of the rocks that emerge from the ground.

The volume appears as if sunk into the hillside, and generates a clean roof plane whose backdrop are the large rocks at the highest point of the plot, at the foot of the Telegraph Tower. From that rooftop, horizontal plane at the highest point, we will have very beautiful views of the imposing landscape.

The scheme is very logical, of pieces that are articulated with a corridor on the side. The slope of the land is used to finish the operation with a large double-height room where the house offers the most interesting space. There we will work with light and views.

The large stepped space will be tensioned with diagonal light from a large skylight open to the south on the roof, at the most extreme angle, in the trihedron.

On the walls of the large living-dining room space, we will open large windows that will conveniently frame the privileged views offered there. We will build them with deep embouchure where the sill will function as a table. The landscape framed there will be even more beautiful.

Outside the house will be made entirely of reinforced concrete, which will appear almost as if it were a bunker. Its interior, all white, will be an exercise of very well controlled light, which we hope will be very beautiful.
_