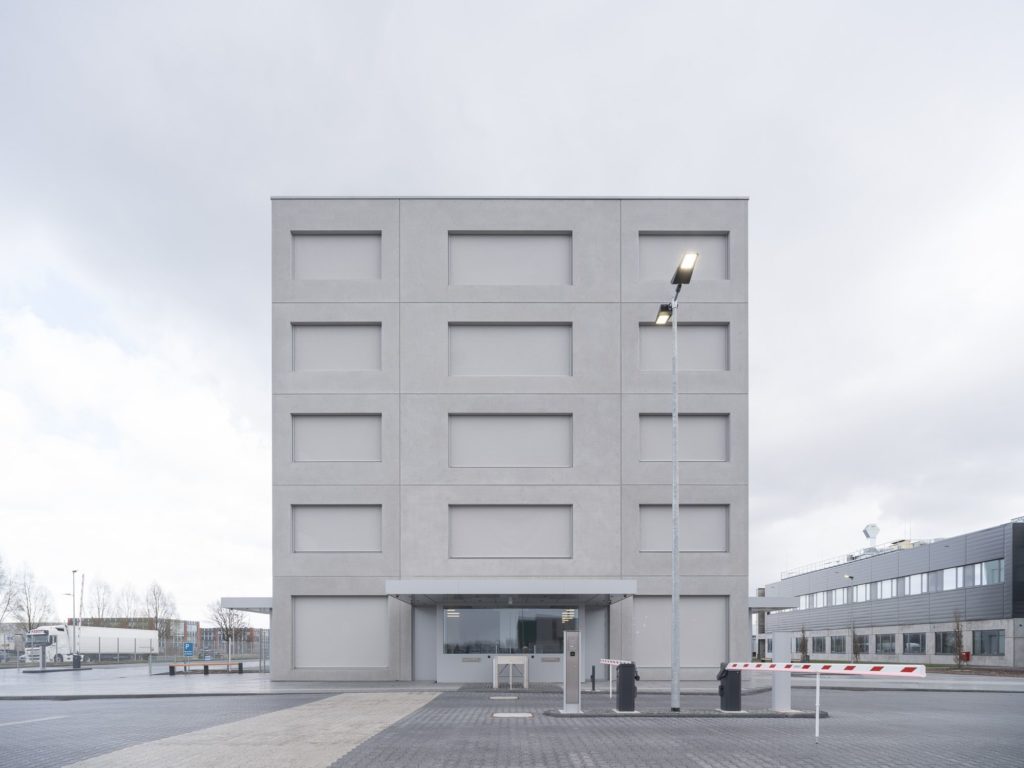 The new office building of the WFG (Economic Development Agency) near of Hanover-Langenhagen Airport was realized by REICHWALD SCHULTZ & PARTNER in cooperation with the general planner CO3PLAN.

The building is part of an extensive westward expansion of the MTU Maintenance Hanover GmbH plant with new hangars for the maintenance of commercial aircraft engines and, thanks to its prominent location, is a representative landmark for the entire site. Inside, the space expands after the main entrance, reception and guard into an elongated hall, in which an open staircase with a seating grandstand connects the levels both casually and in terms of staging. Behind it, the space develops further into the depths with the centrally located café-bar, the bistro and the conference area.
The desire for maximum flexibility of the workplaces on the four upper floors was met with a spatially staged and clear zoning of the building: The spans, which are as open as possible, can be flexibly rhythmed over a length of 70 m by means of different boxes for short meetings, project work and temporary retreats. In contrast, in the condensed core area, communal and retreat areas are organized as both spatial and social connecting elements, in addition to the access points. They all develop special spatial qualities through vertical penetrations: The lower still workplaces are reached via three steps to the top. The project rooms below are thus surprisingly widened towards the top. The tea kitchens expand upwards in an L-shape over two floors each and are connected to each other by interior windows. They are thus vertically and horizontally the actual backbone of the building for retreat and communality. This interlocking extends into the hall-like air space of the dining hall all the way to the first floor.
Prefabricated facade elements made of acidified concrete give the building a sober appearance, whose subtle elegance results from the precise dimensioning and variance of the respective concrete surfaces. Horizontal panoramic windows starting exactly at table height generate an independent relationship between interior and exterior space. The east and west facades, which are especially composed for their long-distance effect, play exclusively with the large-scale alternation of concrete surfaces and fixed-glazed window elements. The exterior sunshade in concrete gray gives the building an appearance that is as subtle as it is irritating between hardness and softness, openness and closedness.
_