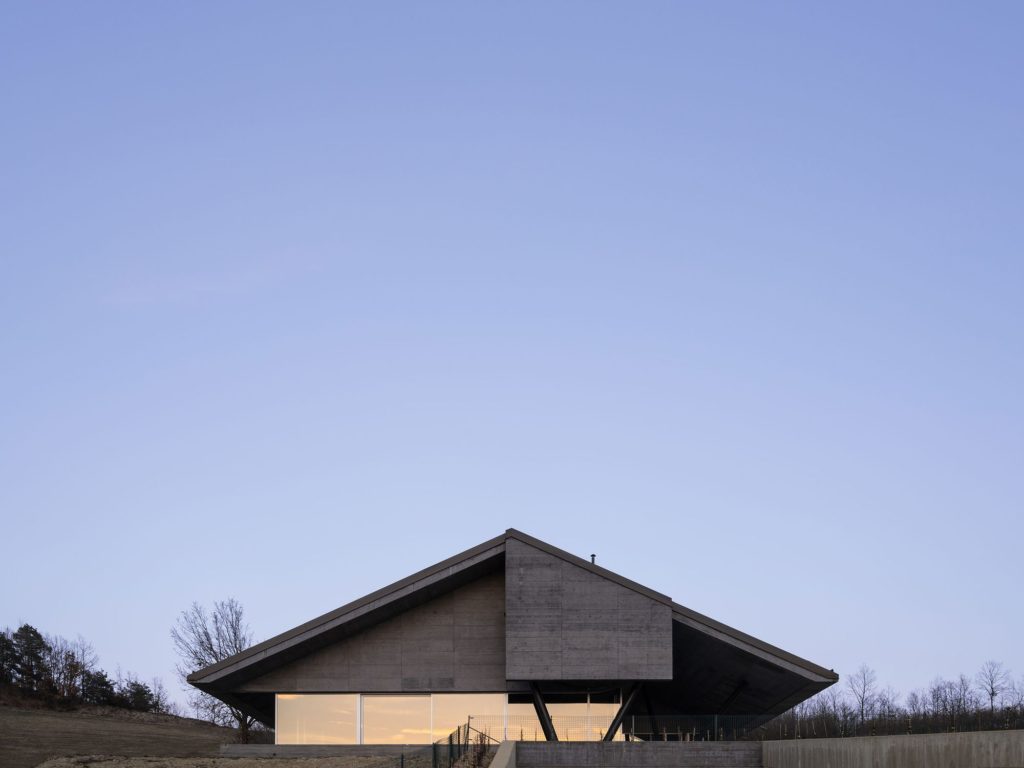 The structural idea of the project comes from the need to respect the language of the Langhe on the outside, and the desire to develop new spatial research in the inside. The structure thus becomes the load-bearing skeleton of the building, and above all the element through which the space is generated and divided.

A large pitched roof in concrete generates two canopies, and is supported by inclined steel pillars, by the canopies themselves and by bodies that contain the vertical elements, such as the elevator and the physical plant systems.

The horizontal forces are balanced by the related parts of the inclined pillars and by three perimeter partitions, with different orientations, that extend to the lower level, where they convey the load down to the foundation.

The basement level contains the continuation of the sloping steel pillars in similar vertical concrete pillars.

The roof is thus the starting point for the entire project, marked by the presence of a ridge beam and the torsional resistance provided by the underlying system of concrete shells that form the canopies, boxed elements capable of organizing the space below and containing secondary spaces.

The canopy that extends lengthwise is spaced by the presence of four concrete diaphragms, which stiffen the zones of connection between the horizontal structure of the roof-canopy system and the vertical structure that supports it. The two pediments placed at the extremities of the roof are broken down and shifted on the various levels, corresponding to the planes of positioning of the diaphragms.

The uphill pediment vanishes in the left part of the pitch, permitting the creation of a large sheltered but open space, with the function of an area for the delivery of the grapes. The downhill pediment, instead, is structure on three levels and contributes to support the roof pitches.

The ground floor volume is bordered by continuous glazing, at a height varying between 2.2 and 2.7 meters, depending on whether it is below the pediments or edged by the pitch itself. It is a curtain conceived as an independent part that divides the heated space of the ground floor from the outdoor sheltered space.

Its flexibility, dictated by the structure of the roof, permits the creation of passages and terraces of various proportions. The inclined pillars inside this volume have a slope dictated by the need to connect the regular grid on the semi-basement level with the most suitable points to provide support for the roof-canopy system.
_