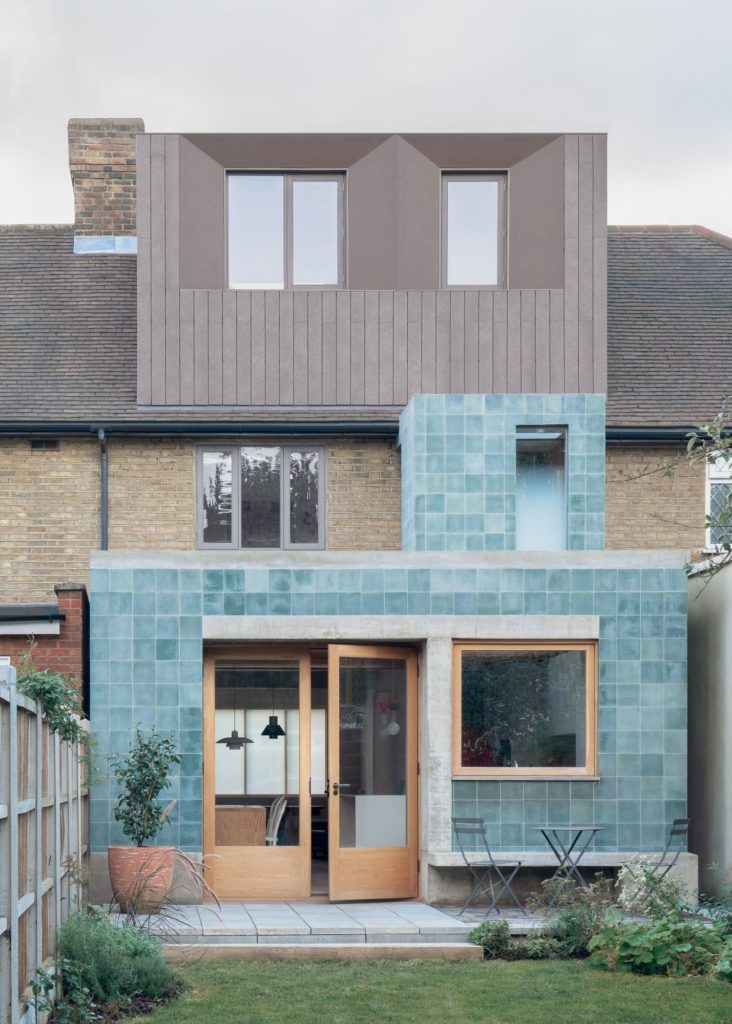 Having lived in the three-bed terraced ex. Warner property for 12months we, had grown used to the nuances and impact of both house and context, coming accustomed to the bright mornings to the rear and embracing the vulnerability to peeping pedestrians passing on the street.

With a young family we sought to modernise extensively, increasing the floor area on multiple levels. The existing 1930’s house had seen some minor modifications over the years with an elderly owner who had also added a modest rear extension and modified the ground floor to open up the small, original rooms that define the rectangular footprint.
As a starting point we were keen to maintain the original, low-slung, horizontal proportions throughout the increased depth of the ground floor, maintaining the framed view out over the thirty metre garden beyond. In direct contrast to so many other DEDRAFT projects it was less about additional height and more about creating open, naturally lit, well-articulated space offering the potential for flexible living – being open when desired, yet more enveloping, homely and domestic in scale when desired.
Having a chance to do some experimentation (not always permitted with domestic clients) the composition of the new rear extensions was a key priority. Developing a coherent expression that features strong concrete elements, defined deep, inset openings and a simple, yet bold palette of materials with distinct textural variation was our aim.
The rear features a cast-insitu concrete plinth that turns vertically, eliminating joints providing a central delineation in the form of a large T-shaped, flying concrete lintel. Contrasting shallow and deep reveals for the rear pivot window and French doors allows the concrete to wrap in under forming a protected threshold between the interior and exterior. Setting a defined scale both monolithic rear additions are clad in square, bold green encaustic cement tiles that have faded slightly with exposure leaving a soft, dusty aesthetic.

Considered and opportunistic verticals slot windows and a rooflight puncture the upper volume that houses the extended family bathroom flooding it with daylight and offering protected views out.
The previously, unused loft space was also converted to form a master suite with the decision made to sacrifice floor area to allow for the creation of a double-height curved stairwell, top-lit via a large, circular rooflight. Rising vertically a solid Douglas Fir staircase and balustrade folds to produce a naturally warm and cocooning entry to the main bedroom.
The interiors are kept natural and simple, inspired by the domestic warmth off both Alvar Aaltos home/studio and Peter Aldington’s Turn End, eliminating the need for complex and visually jarring details. Throughout walls and ceilings are finished in natural, chalky lime plaster, catching and soaking up natural light and alluding to its hand application, adding texture and depth.

Floors are a combination of natural materials – large format solid, whitened Douglas Fir floorboards forming the backdrop and unifying the internal spaces. Micro offcuts of stacked solid ash parquet were used for the entrance hallway and to clad the new staircase and landing with hand-made terracotta and limestone tiles used in kitchens and bathrooms, giving a soft, tactile feel underfoot.
As yet there is no built-in joinery (except the kitchen) with a concerted desire to add more freestanding pieces, collected over time. A freestanding bamboo screen is used to partition off the living space to the ground floor introducing curves that soften and give temporary division and privacy.
All windows and doors were replaced with clear oiled oak rear doors and two-tone (grey stained oak externally and white-oiled internals to soften the aesthetic). The proportions of several casement windows were adjusted to purposefully address functionality, with the rear doors designed to feature higher base rails to help frame the view out and add warmth during those chiller, wet months. A horizontally pivoted window, inspired by the Barbican adds a hatch slot unifying those on the rear patio with those in the kitchen.

As with many of DEDRAFT projects CG Residence features a considered juxtaposition of a muted internal backdrop with strong, accompanying geometric forms that use colour, tactility and a play on proportions to underpin the composed whole.
Being our own home we explored several, subtle details that, on the whole, are often met with a contractors raised eyebrow. In an attempt to produce heavy wrapped monolithic volumes the rear concrete elements and parapet were shuttered and cast in a single pour to finish flush with the encaustic tiles . Over the past year this lack of overhang has made little difference to the weathering and gives the addition a clear defined volumetric mass.
In the same vein the first floor addition lacks a visible parapet, mitring the tiles on all edges and corners to fully envelop and create the green monolith that sits above the lower rear addition.

Timing for the build couldn’t have been worse, commencing one week before the first Covid lockdown. This uncertain time influenced the material selection with lime plaster used almost exclusively throughout due to the shortage and restricted purchasing of standard gypsum plaster. Douglas fir joists in the desired deep proportions took an eternity to arrive making sequencing tricky for the contactor with some more gnarly than at first desired, but none the less adding a warm finish in a space lit through five glazed openings.
The largest challenge was managing the pour of the cast insitu concrete that encases the structural steel frame, ensuring it retained a rawness without discolouring and ensuring thermal breaks were introduced as required. This was meticulously set-out to suit the square grid of the tiles and cast in a single pour to give a consistent finish throughout. The oak window and doors were designed bespoke to reduce frames as much as possible introducing  querks to define joints and raised base rails to better align with the surrounding datums.
_