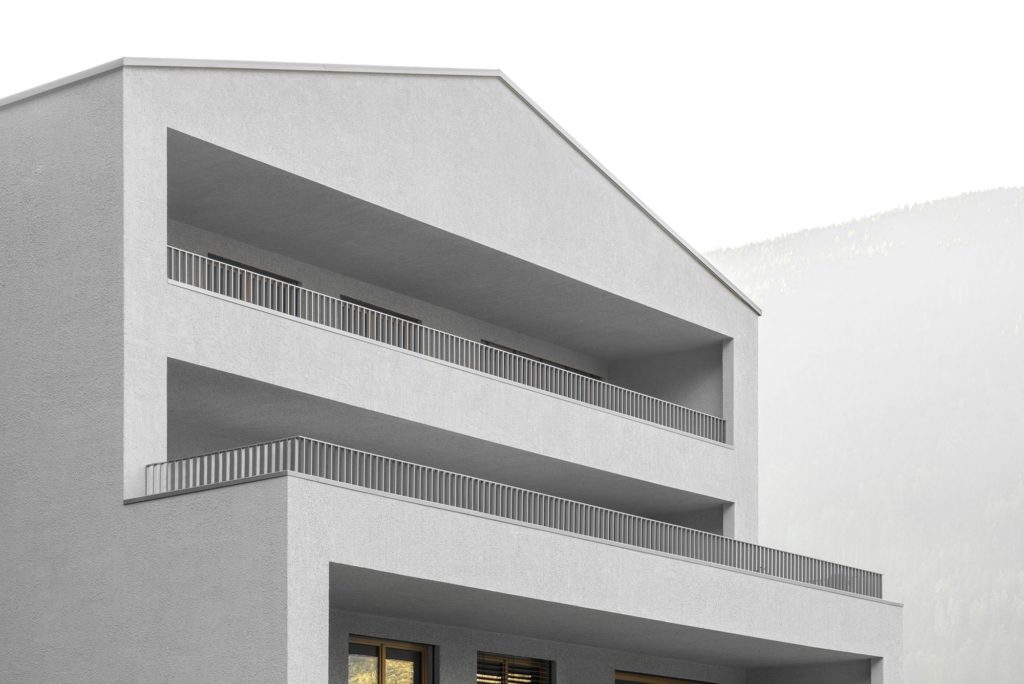 Directly on “Troyenbachweg” in “Niedervintl”, which is the main connecting road to “Weitental”, the residential complex Stampflleite is located on the outskirts of the village. The five-story building includes a common garage on the lowest floor and four individual residential units with basements.
The structure responds to the terrain and is virtually built up against the rock. To accommodate the steepness of the terrain, on the fourth floor the building jumps back and leans against the rock. Overall, the volume of the monolith is thus purposefully distributed over two bodies. The plain attached sheet metal gable roof is the only one to protrude from the site and is blending in with the built environment in its appearance. The exterior façade consists of rough plaster in a light gray tone, with the lowest floor being of dark gray colored exposed concrete roughly formed to provide a natural grounding. The larch slats in the openings of the garage as well as the larch windows refine the image of the structure.

Loggias facing the front offer residents usable and protected outdoor spaces despite the proximity to the street. The garage access and the main entrance are located on the side of the building and are covered by an entrance area made of exposed concrete. This should in the future also serve as an access and entrance to the not yet realized, but planned twin building, which is to finalize the entire ensemble.
The image and the clear choice of materials also continue on the inside: the shared staircase is made of exposed concrete with a railing partition in larch, as are all the entrance doors. The lowest floor was left in exposed concrete.
_