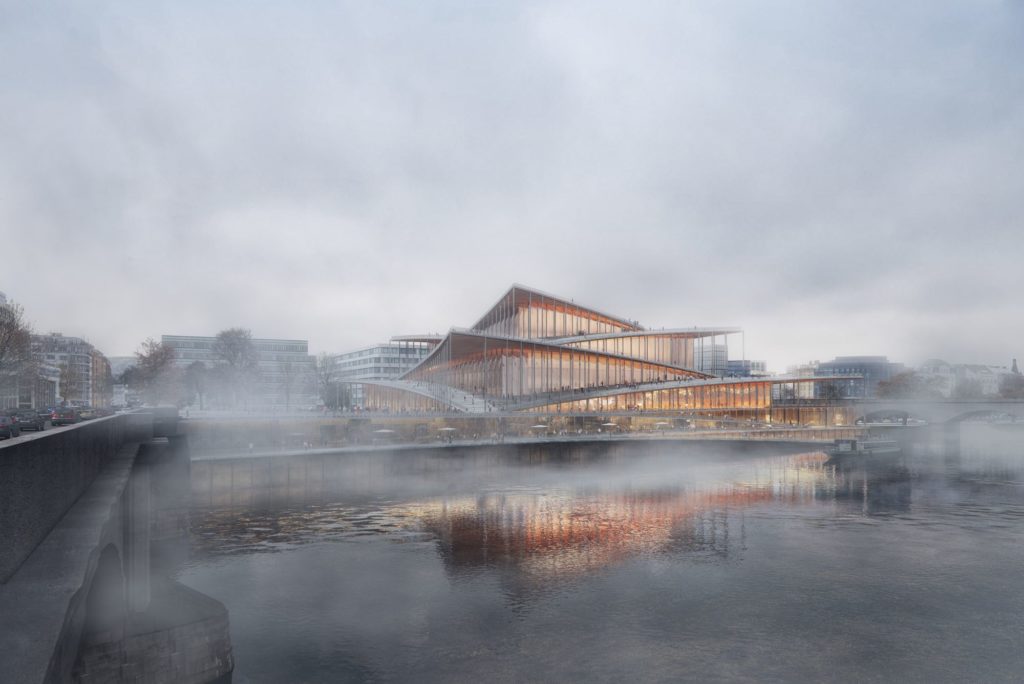 Prague has announced the winner of the international architectural competition for the design of the Vltava Philharmonic Hall, which is the team of the Danish studio Bjarke Ingels Group (BIG), led by Bjarke Ingels and Brian Yang. The decision of the international jury was announced by the City of Prague together with its Institute of Planning and Development (IPR Prague) during a gala evening at the Center for Architecture and Metropolitan Planning (CAMP). The winning design of the modern music center, which will be built in Prague’s Holešovice in the future, does not only work with the building itself, but also brings imaginative solutions for the public space, envisages making the river bank accessible and opens up the Philharmonic Hall’s outdoor terraces, including the roof, to everyone equally.

The ambition of the Vltava Philharmonic Hall is to attract not only classical music fans, but also the general public. The winning design by the BIG studio envisages the construction of three halls, but it will also house the music department and the creative hub of the Municipal Library of Prague, visitors can look forward to a café or rooftop restaurant, and many will certainly take advantage of the educational activities on offer. In the case of the Vltava Philharmonic, the roof will be a continuation of the public space of the square – the stepped form will allow those interested to climb to the top without having to enter the building, so everyone will be able to enjoy a unique panoramic view of the whole of Prague.

The authors of the design turn to Šumava, to the sources of the Vltava River – this is where the wood that will be used in the construction of the building should come from. The wooden ceilings will permeate from the exterior to the interior, symbolically highlighting the theme of the Vltava Philharmonic Hall’s openness to its surroundings. Emphasis will also be placed on the implementation of glass, another element typical of the Czech Republic, which dominates the facade of the building.

The Vltava Philharmonic will also be the home of two orchestras – the Prague Symphony Orchestra FOK and the Czech Philharmonic. Both orchestras will find adequate residential spaces here, but also facilities for expanding their educational programs for the public. Music schools of various levels will also be involved and will be able to use the Vltava Philharmonic Hall’s facilities for their teaching. Representatives of the Czech Philharmonic and the Prague Symphony Orchestra FOK, as well as the Municipal Library in Prague, participated in the preparation of the architectural competition brief and were invited to jury the competition, thus being able to comment on the needs of individual entities.

The new Vltava Philharmonic Hall building will help kick-start the transformation of one of Prague’s most important brownfield sites – the new Bubny-Zátory district should be built in its place, which will eventually become home to 25,000 residents in 11,000 apartments. Construction work is expected to start in 2027, and the new concert hall should be completed in 10 years, i.e. in 2032.
_