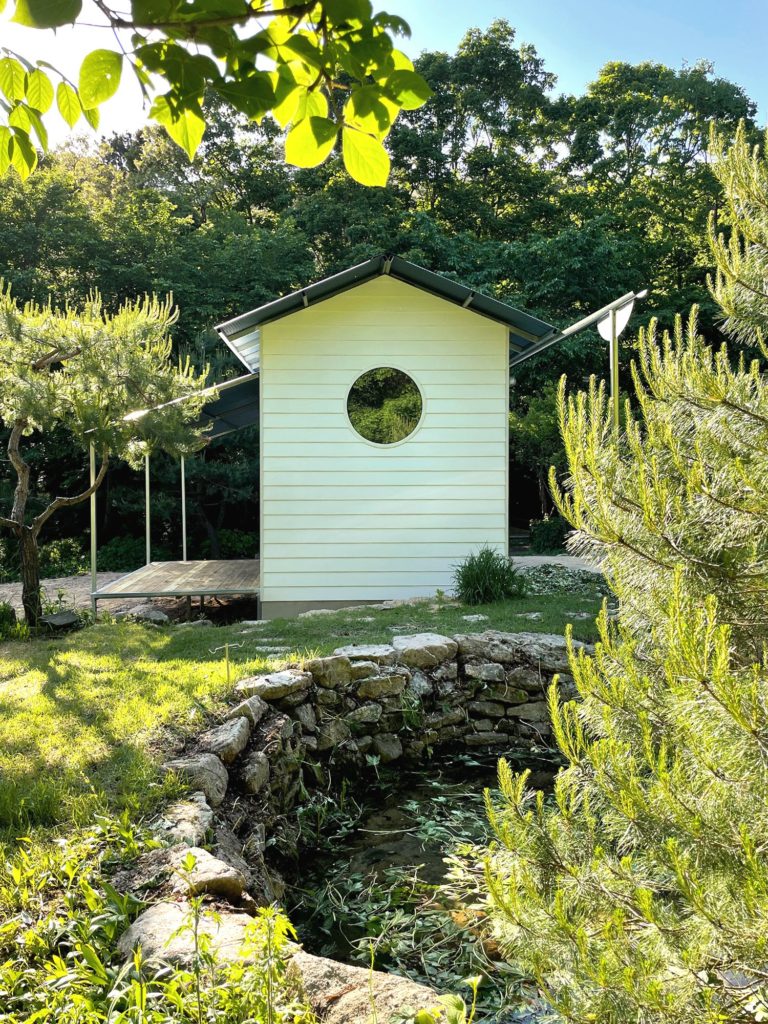 Gartenhaus is a weekend house around Hongcheon in Gangwon-Do. This single-story house near the rich natural environment is set on the border of a nature-fringe between artificial environment and nature.

TYPOLOGY
Nongmak(a garden shed in Korean) is the smallest typology in residential market of South Korea. It was originally a garden shed in agricultural area to help farming and gardening, however, it is popular now as a small house particularly in rural and suburban area. Because the building code was revised in 2012 for Nongmak allowing it to have electricity & gas supplies and septic tank, since then, it has been grown so fast in the market.
It is generally built by housee makers with prefabrication in a factory so that they can provide customers with the house in the cost-effective way. It should be an efficient process like ordering a product and delivery at home because it is not a house of a luxurious purpose. In addition to this, it has been easily optimized and spread due to a key restriction for the size of a house that should be under 20 sqm.
The only limitation of “20 sqm” has made it mostly built in 6 x 3.3 m of the rectangular form. It is related to the transport system and law in a road and the height of a house should be around 3.6 m in the same reason. In a result, it is mostly built within the fixed volume that made itself typological.

Environment: smaller than a forest, Bigger than a tree
On this site deeply located at the end of the village into a mountain path, the delivery system was not available due to the difficulties from the narrow unfinished road nearby. It was obviously thought an opportunity to design differently on site. However, there was no proper reason to try the other forms even increasing the cost for construction in the field of efficiency.
While looking at the surroundings stuck in the situation, I realised the site was in a spectacular environment with natural elements such as forest, trees, sky, streams, a garden and a pond. The initial idea was that even if it should be a small architecture, it could be more flexible and free space if it resonates with these environments.
At first, it was a “height” to break through the logic of capitalism. Because there was no limit in height for the law and just a little increase in the cost. The project was started to defining criteria mentioned above of the height as smaller than a forest, bigger than a tree.

typological weekend house in rural area
This 4.5 m – high house is slightly higher than the other garden houses while it still remains within the typology of Nongmak. That creates not only the specificity of a scale for this architecture but also the universality in typology. It is interesting in that this house imperceptibly has an impossible scale in the typology while definitely looking like Nongmak.
Not only the exterior scale but also 4.2 m – high interior space is to be another environment not just “a room”. In South Korea, where apartment complex forms a major residential type, the ceiling height is normally defined around 2.3 m. The ceiling height in this small house is much higher than the generic rooms and the character of the interior space is to be an environment relatively increasing at the same moment that the scale of an environment outside is relatively decreasing on the stair’s each steps when someone is entering in.
_