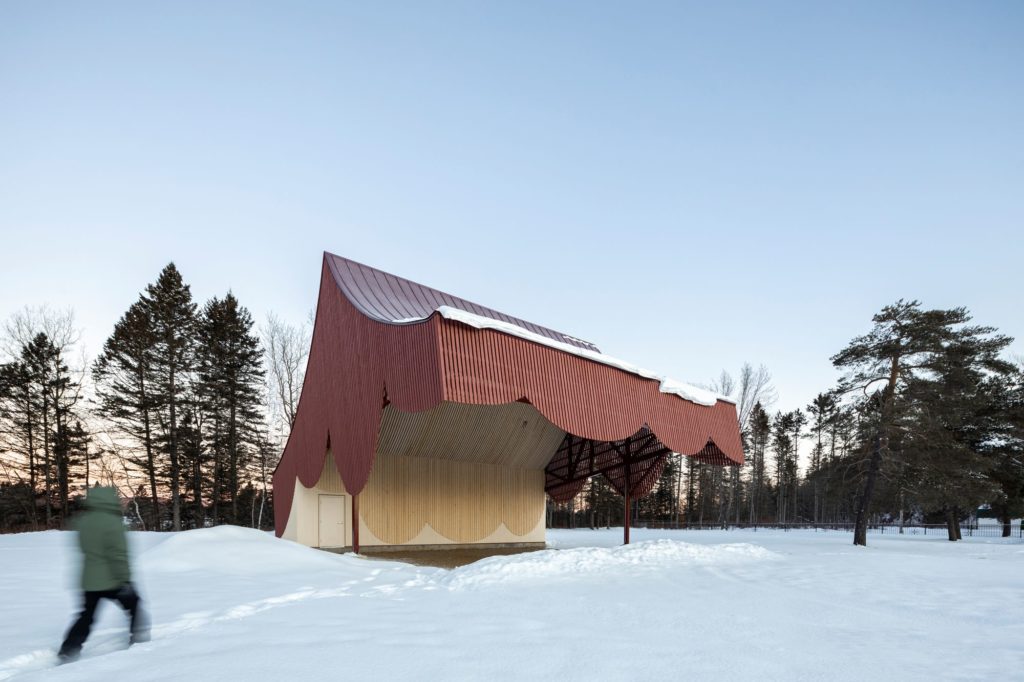 The municipality of St-Élie-de-Caxton has teamed up with the firm Agence Spatiale for the design and implementation of a courtyard to host various artistic and cultural performances in the Nature and Culture Park. The place encourages meetings and gatherings while honoring the imaginary surrounding Saint-Élie-de-Caxton. To facilitate the integration of this courtyard with the appearance of a festive tent in the municipal landscape, the concept is inspired by the traditional Canadian roofs of the municipality and reinterprets it in its own way. The use of wood responds directly to the park’s furniture, as a reminder of the surrounding forest. The interior architecture opens like a book in which the spectator is at the heart of the story.

The concept awakens the playful universe of tales and legends that surround the municipality of Saint-Élie-de-Caxton. The unusual volume becomes a box, a lid that is lifted to reveal a hidden world. Resting on one side only, the roof gives the impression of holding on as if by magic or being blown away by a gust of wind. This structure was worked closely with engineers throughout the process. The wood slats were sourced from local industry and the cutting was done by local craftsmen.

Developed as a multi-purpose space first and foremost, the venue can be used year-round and can accommodate 200 people. An enclosed dressing room and storage were added to accommodate the performances.

A collective place that aims to bring citizens together, the courtyard has another vocation: to attract families, make a mark on the imagination, and spread the word about the municipality throughout the province. It is the close collaboration between the firm and the citizens that allowed the implementation of this enchanting and emblematic concept for the municipality.