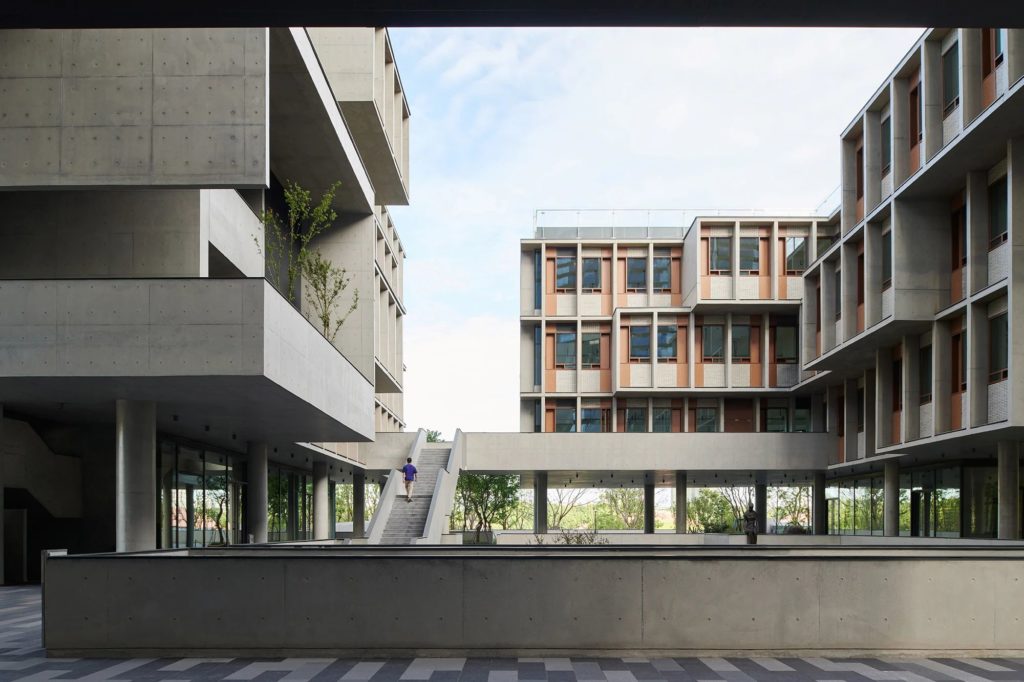 The intention of the design was to create a welcoming space. We can all agree that the most beautiful moments and events taking place in an urban neighborhood are when people meet and mingle in public spaces. In this project we wanted to construct an environment able to enhance this most charming aspect of a contemporary city, to design a space where tenants and residents can be stimulated to unlock new lifestyle possibilities. The abundance of natural landscapes and public spaces created within the Floating Headquarters provides such opportunity.

The architectural concept stems from the exploration of two distinct and carefully planned spatial organizations: one is the design of a series of horizontal courtyards, the other is devised as a system of vertical circulations featuring green pockets at various levels.
Horizontally, three courtyards define the character of the spaces enclosed by the office buildings. These three enclosures are called the Vertical, Tree and Water courtyard. They are placed in sequence and connect the North with the South of the plot. Each courtyard has a unified grid pattern of facades that define the buildings’ overall structure and appearance. The different types of grid pattern for the facade are further refined and adapted according to their orientation and positioning towards either the urban context or the courtyards.

The most northern courtyard, the so-called “Vertical Courtyard”, is positioned close to the city. For the facade facing the urban street, we used aluminum cladding and concrete blockworks, their palette and texture evoking an industrial quality. A rich combination of vertical circulation systems and sunken gardens is introduced here, bringing vibrancy and diversity to the ground level while smoothening the transition from the surrounding streets to the more private interiors inside the office buildings. The second courtyard, the “Tree Courtyard”, is the project’s largest open landscaped space and located in the center of the building cluster. Its facades are covered with wood cladding and vertical greenery so to generate a natural environment.
Following the terrain’s downwards slope towards the south, the third “Water Courtyard” is conceived as a tranquil and serene environment. For the facades we chose glass bricks, translucent and sensitive to light, so to create a soothing architectural atmosphere echoing the water’s natural transparency. Below the elevated office structures, the generous open areas feature crystal clear water parties. We wanted the buildings to float above the water at various heights so that when a gentle breeze stirs ripples across the liquid surfaces it also helps to ventilate and fine-tune the buildings’ microclimate.

Vertically, the strategy of raising the buildings above the ground allows for large open areas and sunken gardens to be created underneath. This gesture gives the overall impression of the eleven office buildings appearing to float above the terrain. This act of architectural levitation not only mitigates the potential feeling of claustrophobia, imposed by the encircling building volumes, but first and foremost softens the transition between the massing of the architectural volumes and the scale of city. The creation of a series of public spaces underneath the eleven buildings invites the city and its habitants into the project.
We also paid special attention to the areas located in-between the buildings’ sidewalls since these are commonly rather muted in their design and appearance. Rather than treating them as leftover spaces, the areas surrounding the fire safety stairs feature interconnected pockets of green space.

The design for each individual office tower started with the understanding of the maximum usable floor areas, given that one set of external fire stairs is placed in-between two neighboring sidewalls. This resulted in a system of vertical public spaces shared in-between the buildings. These spaces all feature outdoor terraces and vertical plantings, while complying with fire egress requirements. Part of the vertical circulation system, these interconnected green clusters climb from the subterranean gardens and courtyards upwards, meandering along the sidewalls all the way up to the rooftop of each office building.
With the Floating Headquarters, we wanted to create a place where people meet, a place where relationships between people, city, and nature are celebrated, horizontally and vertically.
_