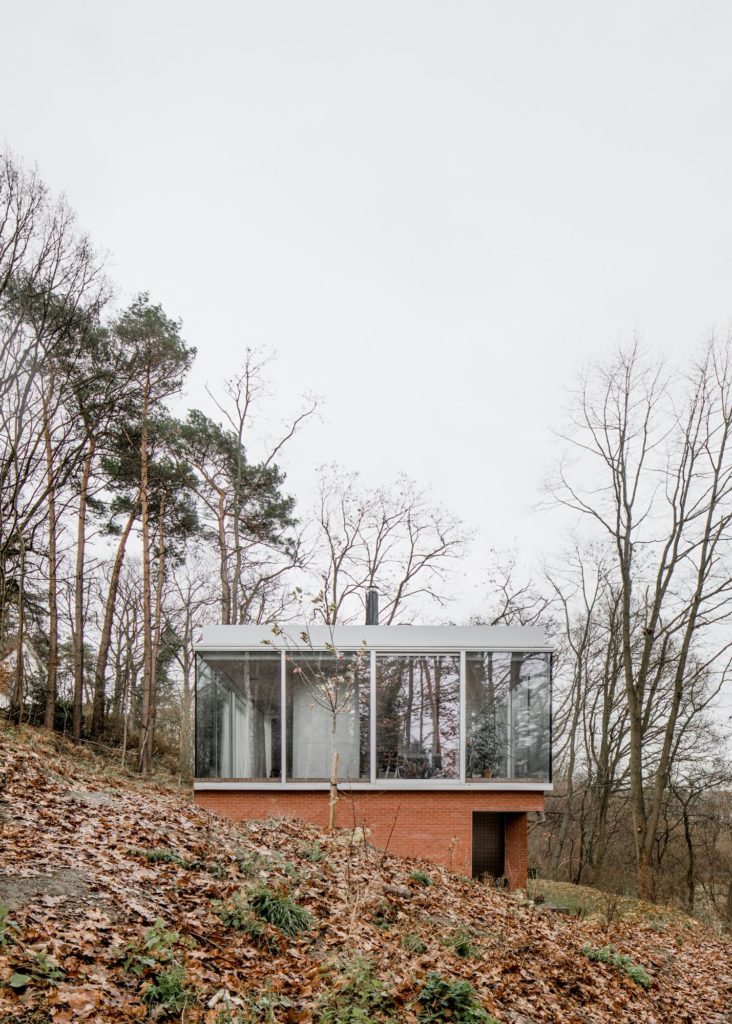 In Grez-Doiceau Philippe Vander Maren and Richard Venlet designed a house with a handful of elements that pay much attention to the elements of architecture and yet succeed in avoiding its overstatement. Precise decisions on architectural elements, applied to a pragmatic spatial organization, resulting in an impressive complexity.

Good architecture has the power of creating specific spatial conditions for the banalest functions of daily life. That is the point where the act of building becomes the art of building. Shopping can become more than purchasing goods, school years can become memories connected to the spatial experience, and eating a delicious meal can be completed to full pleasure. In a house, the domesticity can equally be choreographed and affect the way of living, going much further than just having a roof above one’s head. On the other hand, all these experiences can be spoiled by an architectural scenography that takes itself too seriously, that imposes exaggerated interventions on the act of living.

House M, an architectural collaboration between Philippe Van der Maren (architect) and Richard Venlet (artist), is a project, which pays much attention to the elements of architecture and yet succeeds in avoiding its overstatement. It is not the first time that Vander Maren and Venlet worked together and reached this quality, only, the previous ones were renovations of existing houses. In those buildings, they always found something to react to and made contrasting interventions based on the existing. House M offered a different case as it was a new building, surrounded by nothing else than woods.

Vander Maren and Venlet felt very early in the process that the search for contrast was not necessary here. They conceived a project with a handful of materials and precise decisions and applied it to a pragmatic spatial organization. Yet their shared precision in the combination of architectural elements makes the simple plan of the house reach an impressive complexity in the third dimension.

The project lies on a slanting terrain with many trees. Only a roof is visible from the road that leads to the house, it spans over a glass box sitting on top of a brick box, the latter tucked into the slope. At a closer look, the glass box reveals itself rather as a vitrine placed on top of a brick pedestal. The walls of this pedestal stick through the glass facade of the upper, transparent level, and the brick continues horizontally, covering exactly half of the total floor surface, climbing also along the sole, cross-shaped, steel column in the open space. The other half of this level has concrete floors, the same material spans the ceiling over the whole surface. Floor-to-ceiling windows don’t reveal horizontal frames, on the corners glass plates are meeting each other without a vertical profile that allows the exterior in.

House M reminds me of many qualities of transparent, modernist glass houses set in nature. Inevitably, the cross-shaped column on the plan calls Mies van der Rohe’s column into mind. The lower floor in brick reminds of Philip John- son’s Brick House, which is the silent sibling of the Glass House and contains guest rooms and technical equipment for the transparent volume, positioned 25 meters from it. In House M, however, the axillary spaces in a massive volume are literally part of the house by letting the brick permeate the living room.