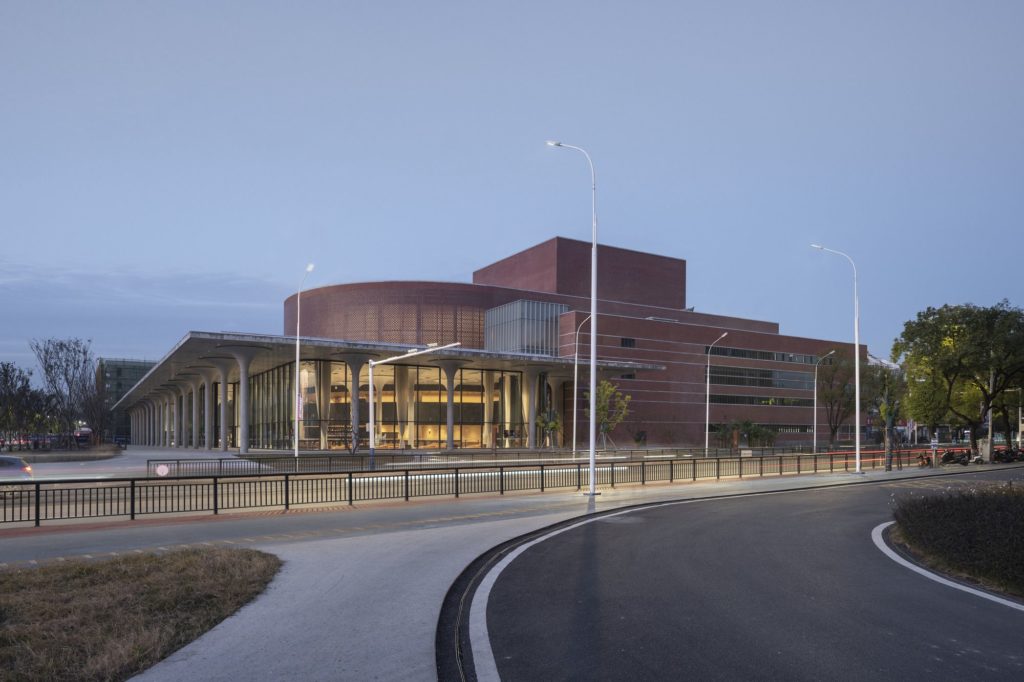 Grand Theatre in Ceramic Art Avenue Taoxichuan complete.
Jingdezhen is a city in the Jianxi province of eastern China, famous for its porcelain which has been produced in the area for over 1,000 years. Situated close to the city centre, an extensive area of large former factory buildings set up for the production of porcelain in the mid-twentieth century is being redeveloped as a new mixed-use quarter.

In a first phase, prior to David Chipperfield Architects’ involvement, the existing buildings in the western part of the site were refurbished and redeveloped to contain new functions such as a museum, porcelain shops and a ceramics market. In the second project phase, the eastern part of the site is being transformed into a campus for the performing arts with colleges, performance venues and further infrastructure. David Chipperfield Architects developed the master plan for this area, which preserves, restores and converts the existing buildings while complementing them with new buildings. The practice was also appointed to design three of the buildings within the masterplan: The Grand Theatre, a music academy and a hotel complex.

A pedestrian promenade leading through the centre of the former production site and a parallel boulevard to its west open the area to the north and south. Several public buildings are located along the boulevard, as well as retail and residential buildings, including student accommodation. The Grand Theatre to the north is a new brick construction which accommodates a classical opera house and a black box theatre. An open atrium, supported by monumental mushroom columns, opens the building to the surroundings. The hotel complex is situated to the south alongside a new library. It consists of four separate buildings comprising a four-star hotel, a five-star hotel and an events venue with a light steel structure connecting them at ground level to create communal outdoor areas for various public activities.

These new buildings complement the cultural institutions housed in the historic factory spaces, including the music academy which forms the centre of the campus. The music academy is housed in two former factory buildings that are refurbished and upgraded for their new use. The distinctive perforated masonry walls and windows are repaired in accordance with the original materials and details. Service facilities and practice rooms are housed in new wooden cubes, which are stacked as two-storey structures within the shed-like spaces of the historic buildings. The academy also houses several flexible performance spaces.

The public character of the inner-city campus is primarily generated by opening the ground levels of the factory buildings, extending the public outdoor spaces into the interiors. Due to their physical presence and historic significance, the industrial buildings give identity and meaning to the area.
_