Extension of the WHO Headquarters . Geneva 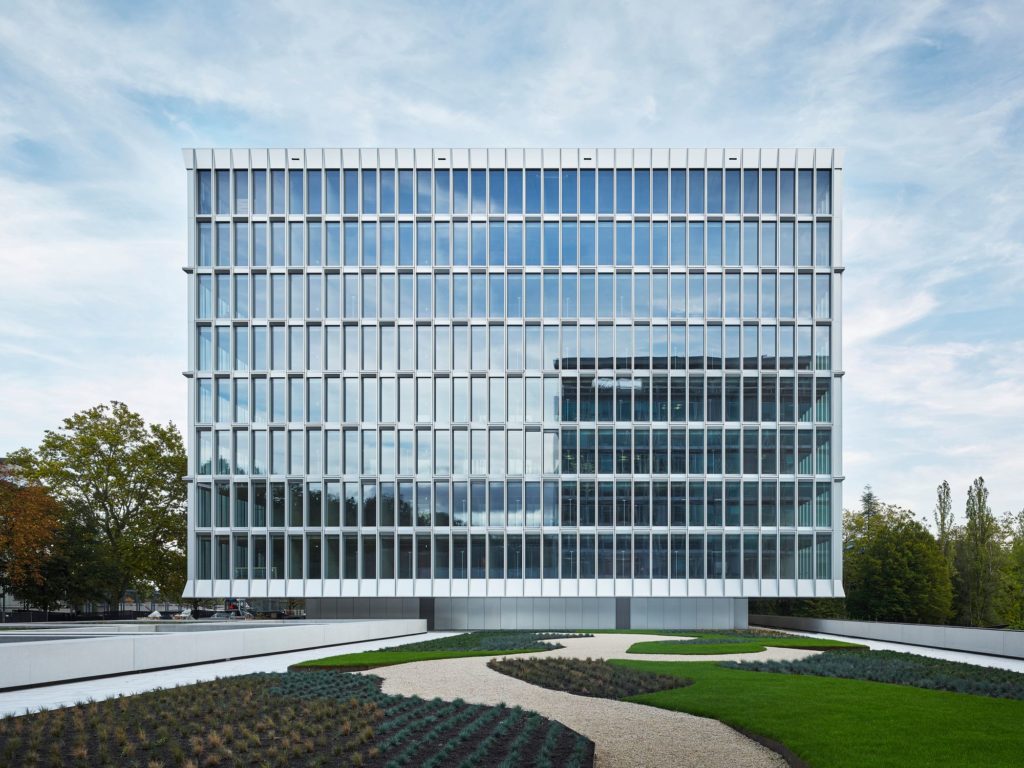 The new building enlarges the existing headquarters of the World Health Organization, set in a park complex at the edge of Geneva. In conception and design, it takes Jean Tschumi’s masterwork of 1966 as a point of departure. Analogously, the addition is structured as a unifying base and a recessed ground floor above which a larger volume is suspended. Forming the spatial centrepiece is a spacious hall in the connecting structure and an open atrium in the office tower.

In 2014, with altogether 253 firms participating, Berrel Berrel Kräutler prevailed in an open, international competition for the extension of the WHO Headquarters. The new building supplements the existing one, erected by Jean Tschumi in 1966, and set in a spacious park complex at the edge of Geneva. The complex encloses a green space like a set of brackets, while the closed, prestigious facade faces the street. Reflecting Tschumi’s design, the extension consists of a connecting base, a recessed ground floor, and a volume which projects beyond it.

The new concrete base – whose large strip windows face the park – interweaves new and old. It forms the new heart of the complex as a whole, a place where staff members can meet at lunchtime or during coffee breaks, can gather for conferences or meetings, or coordinate the 400 operations planned by the WHO annually in various crisis regions worldwide. Recapitulating the arrangement of stories found in Tschumi’s building, the interior of the new base structure takes up the logistical and functional interconnections found in the existing building. A wide, interior passage takes the form of a gallery that overlooks the dining hall, while also affording views of the garden behind. Despite its placement in the lower level, it offers direct views onto the landscaped areas from all over. Adjoining the passage are modular conference rooms with landscaped atria. Available in the second basement level, in addition, is a divisible hall designed for gatherings of up to 800 people.

Forming the upper terminus of the base structure is a terrace with roof garden, inviting users to stroll between the ground floors of the two tower blocks. Like Tschumi’s predecessor building, the new cubiform office tower projects on all sides beyond the ground floor, forming a protected exterior space. Severe in appearance externally, the nine-story building is open, bright, and flexible within. The office levels are broken up by multistory lounges whose open plans allow them to be variously organized. Open atria on all levels offer viewing axes through the tower as a whole. All staff members share what is essentially a common space, reinforcing a sense of community. The four cores not only provide vertical access, but also form the supporting framework of the reinforced concrete structure. Much emphasis has been devoted to the attractiveness of the staircases, which function as places of encounter. The tower’s aluminium facade echoes the faceted appearance of Tschumi’s building.
_