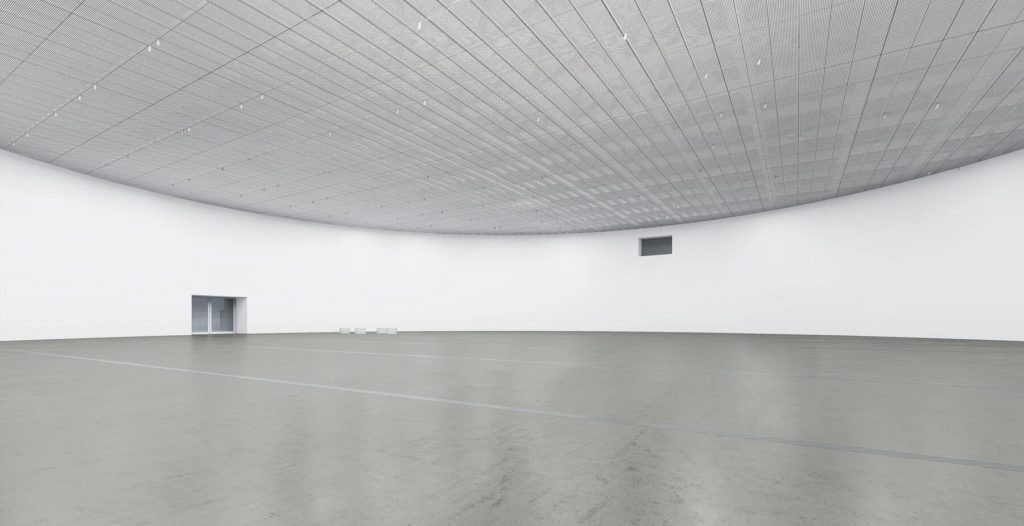 The Hexagon, originally designed by legendary Russian architect Ivan Zholtovsky, will be revived by SANAA’s thoughtful and sensitive design, allowing Garage to ground itself in Russian history while expanding into the current global conversation. It will have three exhibition galleries (two in the facets of the building and one on the underground level), a library, a bookshop, and a café. The internal courtyard of the building will be a public space. The functional floor space of the Hexagon will total 9,500 square meters.

The Hexagon is unique thanks to its proportions, its repetitive elements, and the open nature of the building in relation to the courtyard. To preserve this atmosphere for future visitors, we based the design on six principles.
By preserving the historical aspects of the building (its spatial organization, location, column materials, and the arrangement of the fountain basin), the Museum will expand and clarify its architectural program. With each of its buildings (Bakhmetevsky Bus Garage, Vremena Goda café) Garage has opened a new chapter in its program of reviewing and repurposing architectural heritage and, in the end, returning it to the contemporary context.

HISTORY OF THE BUILDING
The building was constructed is 1923 as the Machines and Tools (Mechanization) Pavilion of the Machine-Building Section at the First All-Russian Agricultural and Handicraft Industries Exhibition. The Machines and Tools Pavilion was the only one constructed using reinforced concrete (the other pavilions were wooden and have not been preserved).
Its structural layout is formed by a frame of reinforced concrete posts and beams and wooden trussed rafters. The interior of each facet pavilion has a double-height central part and narrower single-height wings that join to form a low gallery enveloping the entire building on the outside. The structural frames of the single-height spaces consist of thin vertical supports for the outer walls covered with horizontal beams that form the rafter girder supporting the reinforced concrete roof beams with diagonal ribs. Originally, the six double-height spaces and the single-height galleries that connected them opened toward the internal courtyard and were not separated from it by walls.

When in 1928 the city government decided to transform the territory of the former Agricultural Exhibition into the Park of Culture and Leisure, the building was converted into its main canteen. Three of the six facet pavilions were separated from the internal courtyard with light walls and two of them became kitchens and had stoves installed. Toilets were built between the pavilions on the outside.
Initially, the canteen, like the park itself, was open only in the summer. In the late 1930s, when the Central Park of Culture and Leisure became the first in the country to feature a winter theme park and several ice rinks, the canteen was reconstructed once again. Its six pavilions were covered with brick walls and re-equipped to work all year round. In 1935 the canteen was renamed the Hexagon.
In the early 1960s, part of the building was repurposed for lemonade production.
In the past few decades, it served as a café, a restaurant, and a discotheque, among other things, until it was eventually abandoned. After a number of fires, the Hexagon was partially ruined.
In 1999, Moscow City Government declared it a protected monument of garden and park design. The Machines and Tools Pavilion (the Hexagon) became a listed building.
_