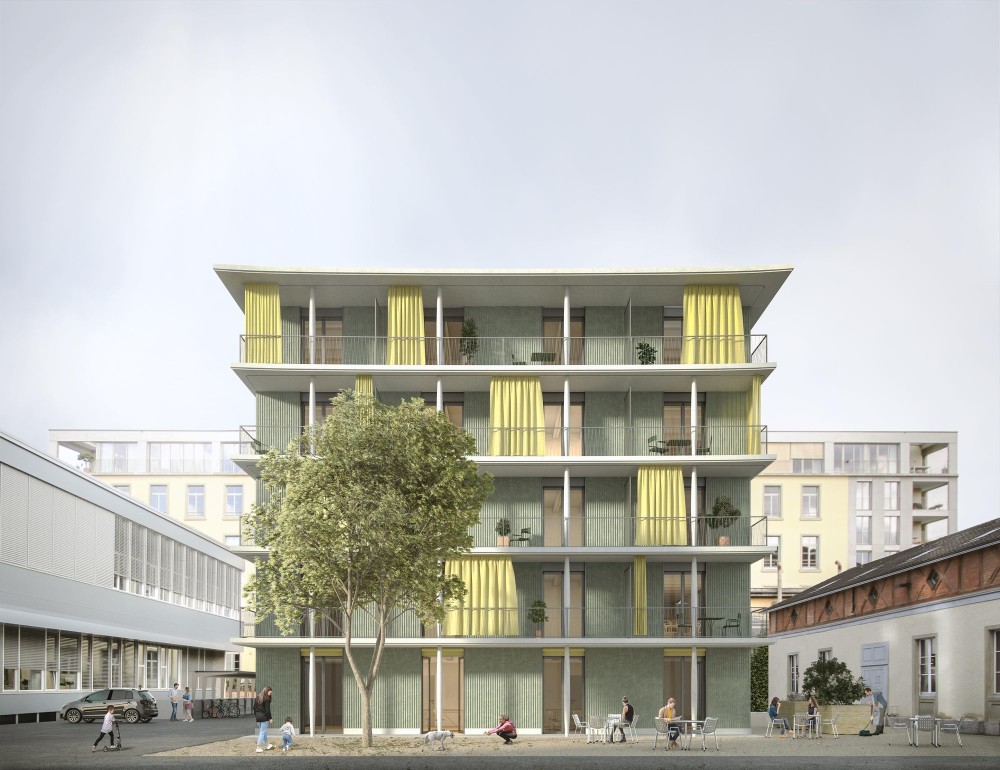 The historic site of the Kunzareal is characterised by a paradox typical of industrial locations. Constant change, corresponding to the advancing industrial processes, contrasts with the permanence of the infrastructure, which here is characterised by hydroelectric power. In our case, the change concerns the reoccupation of the site of the former boiler house. In the process, the informal charm of today’s Giessplatz is to find its echo in the future open space design.

Urban Planning and Open Space Design
The original proportions of the boiler house, the volumetrics of the neighbouring buildings and the opening of the area created in the 1960s with the demolition of the predecessor buildings of the Kunzwerk, which extends the spatial axis of Dorfstrasse to the Giessplatz, are decisive for the setting we have chosen.
**So we have decided on a north-west orientation.
We therefore decided to use the full depth of the G2 site in a north-south direction and to move the new building close to the diesel workshop in order to redefine the Giessplatz as a point of arrival in front of the electrical workshop. The volumetrics defined in this way allow, depending on the disposition of use, an efficient 4- to 9-building structure with an appropriate, central staircase. This is accessed from the entrance in the north. The space between the Kunzwerk and the new building also contains the covered bicycle parking spaces and the additional visitor parking spaces along the existing access ramp. In accordance with these uses, we propose an asphalt surface here.
The remaining areas around the new building should remain unsealed. In this context, the marl surface of the casting yard extends to the electrical workshop and the diesel station. The robust and heat-resistant oak tree on the Giessplatz at the entrance to the site provides shade and forms the eye-catcher in the spatial axis of the Dorfstrasse. No other fixed plantings or installations are planned for the open space. The open space is to be furnished and designed by the residents according to their changing needs. In this way, the space can be used in a variety of ways as a playground or market area, invites people to linger and remains a meeting place for the residents and studio users. Concrete slabs with a broom finish and embedded in the marl flooring create a transition from the public space to the studios on the ground floor.

Architectural expression, load-bearing structure and construction
In its architectural expression, the new building is intended to be reminiscent of an industrial building thanks to its robustness and at the same time radiate a homely charm in its delicacy. The façade cladding of coloured corrugated Eternit, together with the easy-to-read construction of balconies and surrounding storey slabs, the coloured textile sunshades and the woven guardrails, create a delicate, cheerful façade appearance.
The building is planned as a timber hybrid structure with a basement. The materials wood and concrete are used in their predestined places. In this way, the respective material properties such as thermal conductivity, density, moisture resistance, combustibility, stiffness and ecology are optimally utilised.
The existing media duct is left in place until the new building is constructed. Where the lines meet the new building, the duct is demolished and the lines can be routed inside the building on the ceiling along the basement wall.
The components in contact with the ground as well as the escape route and the staircase core will be constructed in reinforced concrete. The horizontal load transfer, resulting from the effects of wind and earthquakes, is carried out via the access core. The loads are transferred via the slabs, which are designed as discs, to the staircase core and further into the foundation. In the basement area, the building is founded on a shallow foundation. Since good load-bearing ground is only available at a depth of two metres, micropiles are planned for the area without a basement.
The ceilings, beams and columns will be realised in timber and timber hybrid construction. On the exterior walls, the load transfer of the vertical loads takes place via load-bearing timber frame walls and via a beam-column system in the area of the windows.
Inside, the timber-concrete composite single-span beams rest on the beech joists. The sound insulation between the utilisation units is realised via separate ceiling elements. The resulting additional load-bearing axes are formed with beams and columns integrated into the walls. At these floor transitions, filigree steel supports guarantee settlement-free – as they are free of cross-wood – load transmission even in the area of the ceiling ribs. The consistently superimposed vertical elements of the supporting structure (columns and walls) are coherent and symmetrical, despite the building’s different flat layouts.
_