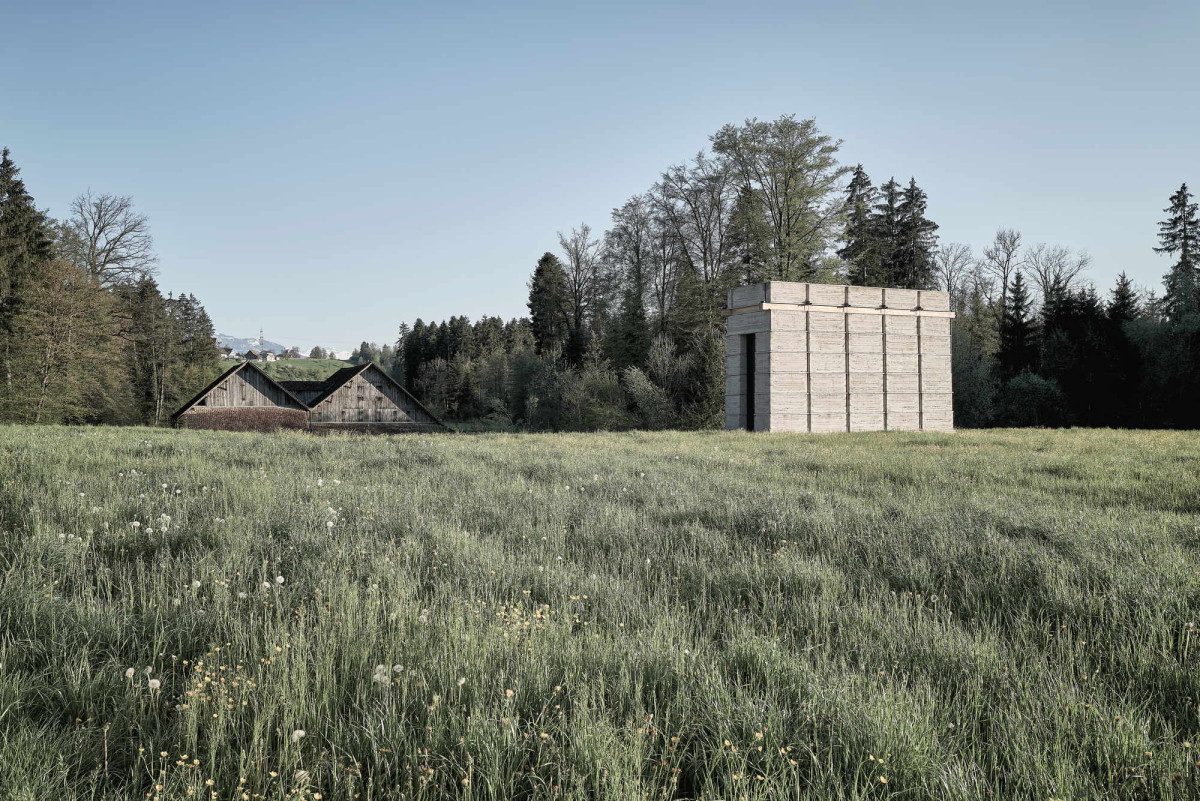 The brickworks, that is run today by the Brickworks Museum, is the only intact surviving handmade brickworks in German-speaking Switzerland. The listed ensemble consists of a timber brick-drying shed, a kiln, that may no longer be operated, the biotope of the historical clay pit, a residential building with gardens, and a museum building that replaces a burned-down barn. In 2017 students of the guest professorship at the TU Munich worked on the task of designing a new kiln tower on the site. The prestressed earth-and-timber structure is based directly on the mock-up carried out at the Sitterwerk and is the world’s first prestressed earth building.

The building material presents clay in its unfired form and demonstrates a contemporary development of the archaic method of building with rammed earth. The new tower allows visitors to survey the site from atop the roughly eight-meter-high viewing platform and enables the staff to fire bricks again with the new kiln. In addition, a space will be created for displaying other museum exhibits.

The exhibition room with the adjoining kiln has a solid, stiffening timber ceiling. Its character is defined by the presence of the earth and the monumentality of the concluding kiln wall. Thanks to the light slits of the open joints, in front of which the prestressing elements run, visitors can experience the whole solidity of the rammed earth walls, that contrasts with the delicacy of the tension bars. Simple steel frames can be attached to these to hold exhibition panels or exhibits. A steel spiral staircase provides access to the viewing platform on the roof.

Building with rammed earth elements is not new, but the joints between blocks, whose size depends on conditions of transportation and assembly, are usually time-consumingly hand-filled afterward. This eliminates the traces of building with prefabricated elements, which become the theme of this experimental architecture which seeks to increase the efficiency of the building process and stability by means of structural innovations. The first innovation is the aforementioned prestressing which makes the system resistant to earthquake loads. The earth, which can only withstand compressive loads, and the tensile steel are a perfect match. The second innovation is the integration of the timber element base plates into the wall structure. A weather drip is installed on the plates on site to protect the earth from erosion and illustrate the joining principle.

The scientific monitoring of the project is a contribution to researching the rammed earth. More than sixty million tons of earth and clay are excavated in Switzerland every year, most of which is used to landfill gravel pits. Finding new ways to use this unexploited resource would be an important contribution to substituting energy-intensive building materials such as concrete and bricks. Compared with conventional building methods, this would enable embodied energy savings of up to forty percent in new builds.
_