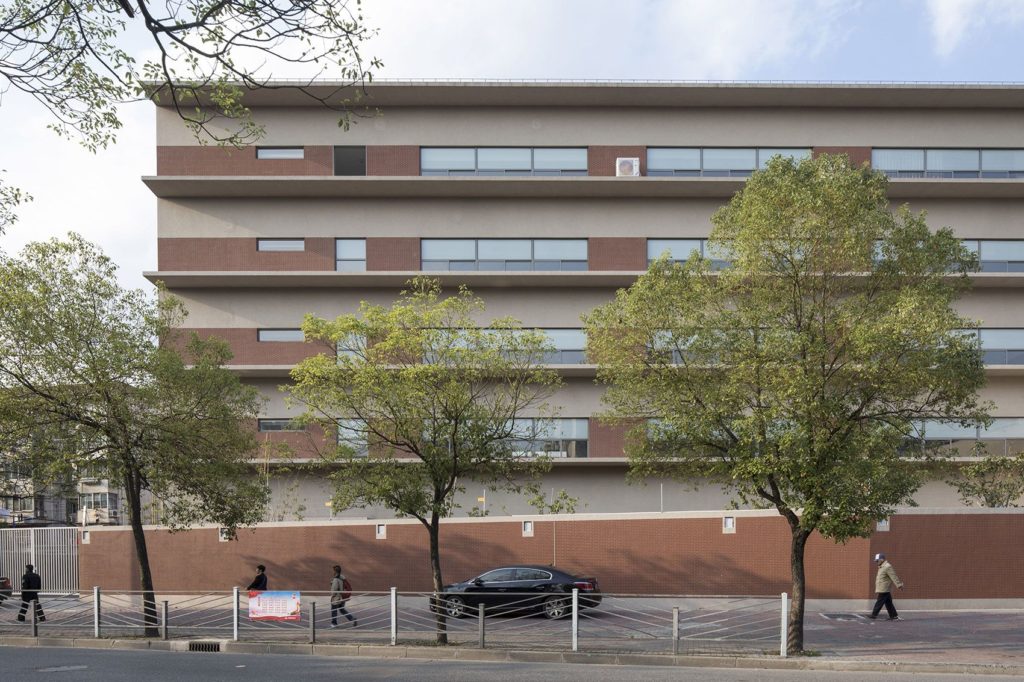 The Huafa Road South Campus of Shanghai XuHui High School is located in XuHui District. Due to restrictions of the location, the campus is separated in half by a pathway leading to a residential area. But with a strategic design layout, the east and west blocks are both centralized and independent in the sense of functions, while interconnected as an entity with an elevated walkway. Meanwhile, the entrance to the playground area is placed along the community pathway, which enables part of the school facilities to be shared by the community.

The administrative offices, canteen, gymnasium and the junior high school part are located in the east block, with a relatively lively atmosphere. The laboratories and the senior high school part are located in the west block, with a relatively quiet atmosphere. Thus the unfavorable impact of the community pathway splitting the campus initially is minimized. The playground and the gymnasium can serve the community with the opening along the pathway and bring beneficial communal space to the community. The curriculum and teaching behavior characteristics of the junior and senior high schools are also reflected in the spatial layout.

The campus building adopts a corridor-and-courtyard layout, creating several quiet inner courtyard spaces in the noisy and crowded blocks, and also provides a good place for students to communicate with each other. In the rainy weather in Shanghai, the courtyards and corridors are very useful. There are also many elevated platforms above ground floor, both efficiently covering education space, and providing the students with as much exterior space as possible within the limited site.

At the beginning of the design, the project had not been determined to be the branch campus of Shanghai Xuhui High School. Therefore, the relationship between the atmosphere of the campus and the old Xuhui Middle School was not taken into consideration at first. The campus had a white and colorful appearance, a similar visual language to the Taoliyuan School which was also a work of Deshaus. But during the construction process, the Xuhui District Education Bureau determined that the Xuhui High School will establish a branch here. The school has a long history since 1850, the predecessor of which is Xuhui Public School founded by the Catholic Jesuits. The famous Chongsi Building on the campus was sketched and supervised by Belgian priest and architect Disni, and completed on June 20, 1918. The exterior of the building is a masonry structure. The exterior wall is made of water milled red bricks and artificially cut granite as the main materials. There are many Corinthian pilasters. The principal of the school hopes that the new campus can consider this context and still have an atmospheric connection with the old campus.

After a thorough reflection on the original design, although it began with white and colors, among the design concerns, structure is still a key point to integrate with the space. The classroom layout followed the distribution of the beams from the very beginning, which also served as an exterior component to reveal architectural intentions. And so eventually the façade is applied with a brick pattern and displays part of the structural components. The components are revealed to the outside with two special features. On the south façade of the buildings along Huafa Road, cantilevered concrete plates are placed at sill height due to noise-prevention concerns. These concrete plates also provides the students with a sense of security. The plates along with the main beams and the sill planes are all casted with concrete, and this concrete element becomes a very unique architectural form on the south façade. The cantilevered plates facing west are lowered to the upper edge of the windows, to act as sunshades. Since the main beams stretching from the classrooms out onto the corridors and the sealing side beams of the corridors facing the inner courtyards are not placed at the same height, but slightly dislocated, this results in interesting clerestory windows on the corridor, and intriguing elevations.

Eventually, although the buildings of the new campus did not imitate the exact architectural form of the XuHui old campus, but the façade strategies and certain similarities of the exterior wall materials still form a sense of continuity.
_