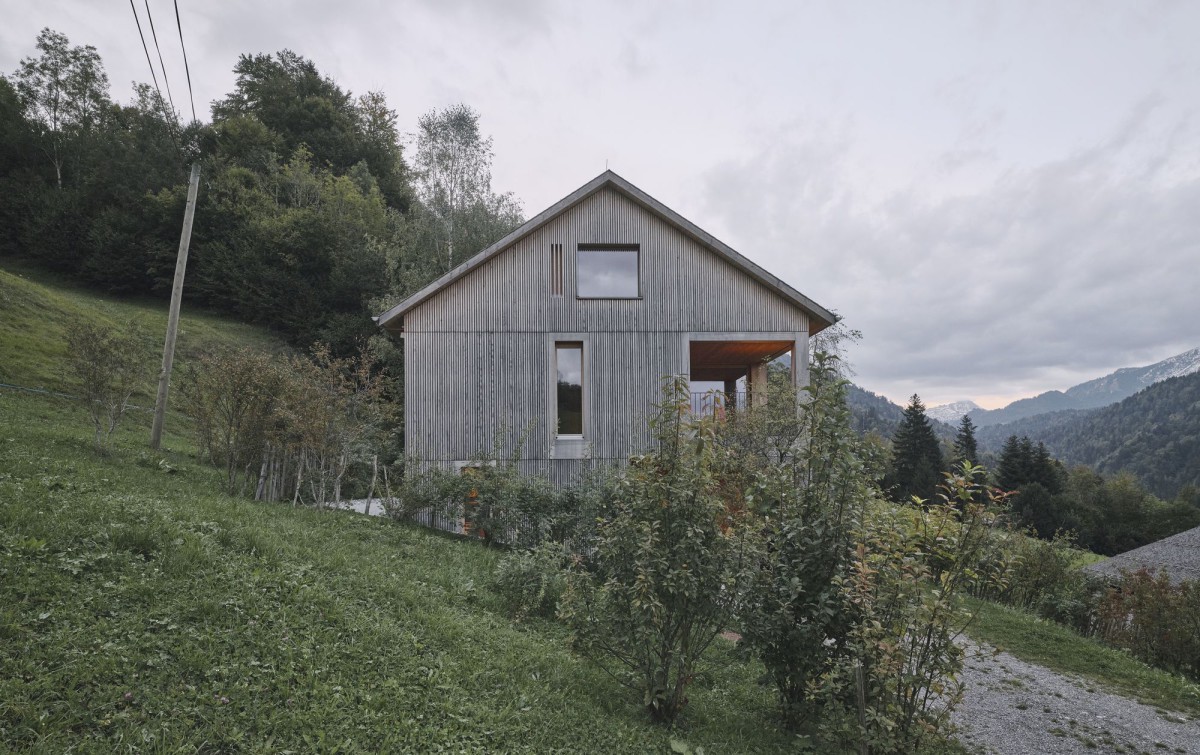 The former house which was situated at the site was built as a tiny farmhouse about 100 years ago. Its location was in the steep green landscape close to the old farm of the owners. The idea of the elderly farmers was to stay close by and still provide a helping hand for the next generation managing the farm. The old Austrian “Wälderhaus“ was a small typical farmhouse divided into living accommodation on one side and a type of big barn on the other side.

After several changes of ownership, it was time for a serious renovation and the new owner wanted to enlarge the living space. As changes were only permitted within the property’s former geometric form there was no need for spectacular designs. Our aim was to do all changes by respecting and keeping with the building tradition of the Bregenzerwald. Therefore, the residential wing was to be preserved at all costs in its essence and only the barn part was to be rebuilt for a more open and modern living structure.

The entire materials for the facade and all window details correspond to this interior spatial concept: on one hand, the residential part is dominated by the traditional handcrafted and round shingle tradition and its small-scaled ‘Bregenzerwald’ – windows with a front and inner window – layer and traditional folding shutters. On the other hand face of the former barn is reflected in large window arrangements, sliding doors, and precise vertical planking for the facade.

The new garage building is integrated into the slope as a new concrete element and presents its visible surface as a roughly staked rock corner. Like an erratic boulder, the garage gives shelter to an alcove with a statue of the Virgin Mary next to a quiet hiking trip and thus reminds of the rural tradition of the area.

For the inside of the house, it was a challenge to connect the small-scaled and very narrow spatial structures on one side with more open and large-windowed rooms on the other hand. The given place of the steep staircase and the old tiny- room- the structure of the living area demanded an unusual floor plan organization. For this reason, the inner organization had to deal with breaks, left-over corners, and spaces, or different heights of the ceiling.

These different attitudes had to overlap and create a floating link between old and new. Unpopular obstacles turned out to be opportunities to discover the unusual: For example, the new location of the fireplace is both parts of the living room and part of the hallway and the main entrance; the bayonet-like staircase to the dining room allows the view from the modern dining room table through the study towards the historical window on the opposite side of the house; the double access to the sauna on the upper floor was created and the sauna’s relaxation room is both in charge of the sauna or the sleeping room.

The element that connects both room concepts is the typical local, wooden paneling (silver fir) and the wooden flooring (ash). There are only two single rooms which are made of special and different wooden paneling. Like special capsules, the old living room and the bedroom are completed either with antique wood from the old house (living room) or sleep-inspiring pinewood (bedroom).

The building is situated in a lonely landscape. All meadows go up to the house. All paths and roads are naturally and unchanged. There are no fences. The narrow access path to the main entrance leads hidden along an old cow path towards the front door. The former topographic situation around the new garage building was reconstructed.

The essence of the small farmhouse belonged so much to this place that we took its influence on the structure and the new design as a chance. The result is a win-win alliance between the light and the dark, between the low and the high, and between the past and the present.
_