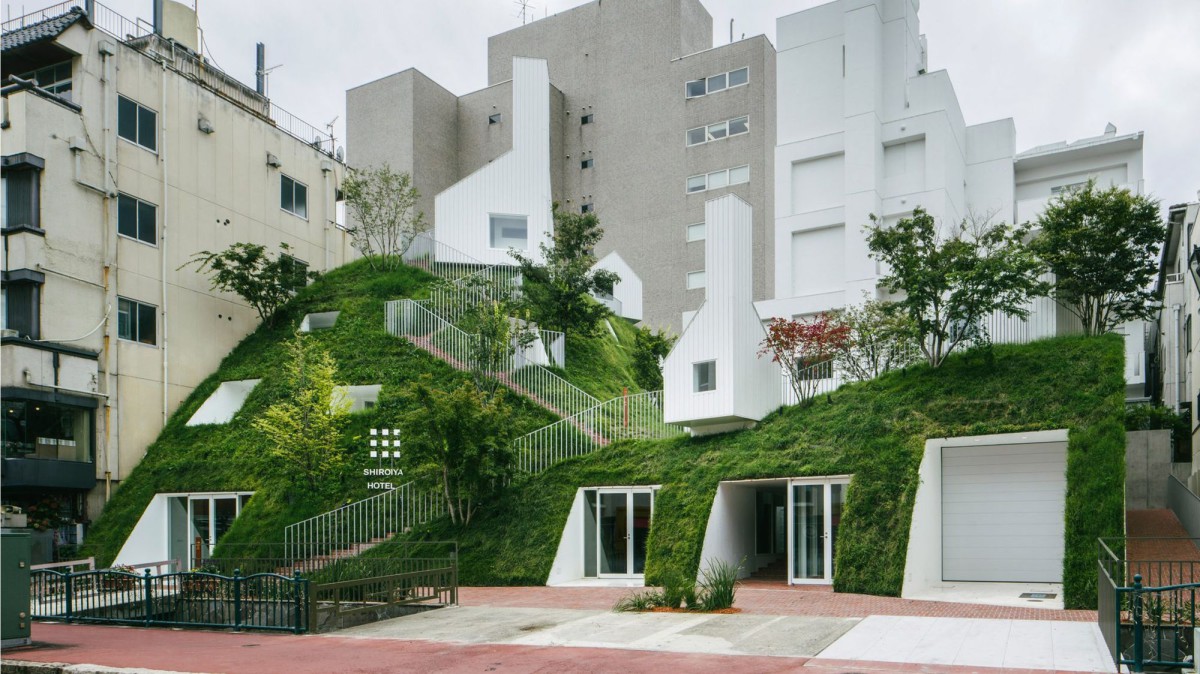 The project was to rejuvenate a defunct building in the centre of Maebashi City, Gunma Prefecture. Formerly belonging to a long-established inn, the work was intended to assist in regeneration of the whole city centre. Our brief was to renovate the four-storey reinforced concrete main building into which the inn had moved some 40 years ago. This would be called the Heritage Tower. The second task was to construct of a new building, to be called the Green Tower.

The Shiroiya Ryokan (inn) had been in operation for over 300 years, since the Edo Period, but it sadly had to close, leaving the building vacant. The rejuvenation project began when Jin Tanaka, President of the JINS Eyewear Company and himself from Maebashi, purchased the derelict structure with the hope of using it to revitalise the whole hollowed-out centre of Maebashi, called the machi-naka area.

We visited the site at the earliest opportunity, and found a banal four-storey RC structure. We felt that something drastic was needed to realise any potentiality, and at the start of the design process, we decided to dismantle the walls and floors across all four storeys to create a gigantic central atrium. This initial idea inspired the ensuing design concepts.

A lounge space in the atrium’s ground level serves as a ‘living room for the city’. It is continuous with the street outside, inviting people in, as a place for all kinds of people to meet and gather. The huge cavity, with its powerful concrete columns and exposed beams, is filled with the natural rays from upper-level skylights. It is a city-scale internal piazza where diverse elements coexist, such as artworks, plants, furniture, curtains and staircases.

When a visitor climbs the stairs, they perceive spatial changes, stretching and reducing in depth and overlapping in all directions, as their sight-lines and body-direction alter along the route. This replicates the experience of moving through an actual city. The seamless three-dimensionality continues right up to the top of the atrium. This vertical cavity forms a 3D urban district of streets, which continue on from outdoor pathways. At the same time, the atrium is a piazza, or ‘room belonging to the city’, for diverse objects, people and activities.

The new building is adjacent to the old one. Its location was formerly a terrace over a tributary of Tone River, and the two sites have a height difference equivalent to one storey. Originally, the main building had a public footpath traversing its site from the main road at the front, to Babakkawa-dori street in the back. We therefore proposed a green bank to function as similarly, running from the main road to the rear street, which would also compensate for the height-difference. We created a raised bank to offer a new urban space and to be a three-dimensional extension of the existing route. It is also a spatial expansion of the sidewalk, and is surrounded by curved surfaces. This bank is coupled with the main building on the concept of oppositions, such as new/old, outside/inside and urban/architectural.

Our client, Mr. Tanaka, is involved in numerous regeneration projects for Maebashi’s machi-naka, and the Shiroiya Hotel was not alone. While the new building was under design, in 2016, Mr. Tanaka and Maebashi City teamed up to research and analyse the principal features of the city, and they came up with the concept of of mebuku, or ‘sprouting’. This would be the keyword for visualising Maebashi City 100 years in the future. The undulating green hills of the new building resonate with the concept of mebuku, while also referring back to what Maebashi was like before it urbanised.

As work at the Shiroiya progressed, Maebashi City underwent gradual change, which became symbiotic with the project. Several artists, designers and city residents participated to support Mr. Tanaka’s vision, and the Shiroiya project embraced diversity through collaboration with those individuals and groups. We hope this new space, born from a mixture of city, architecture and landscape, will contribute to the remaking of a future city, growing and resonating throughout Maebashi City.
_