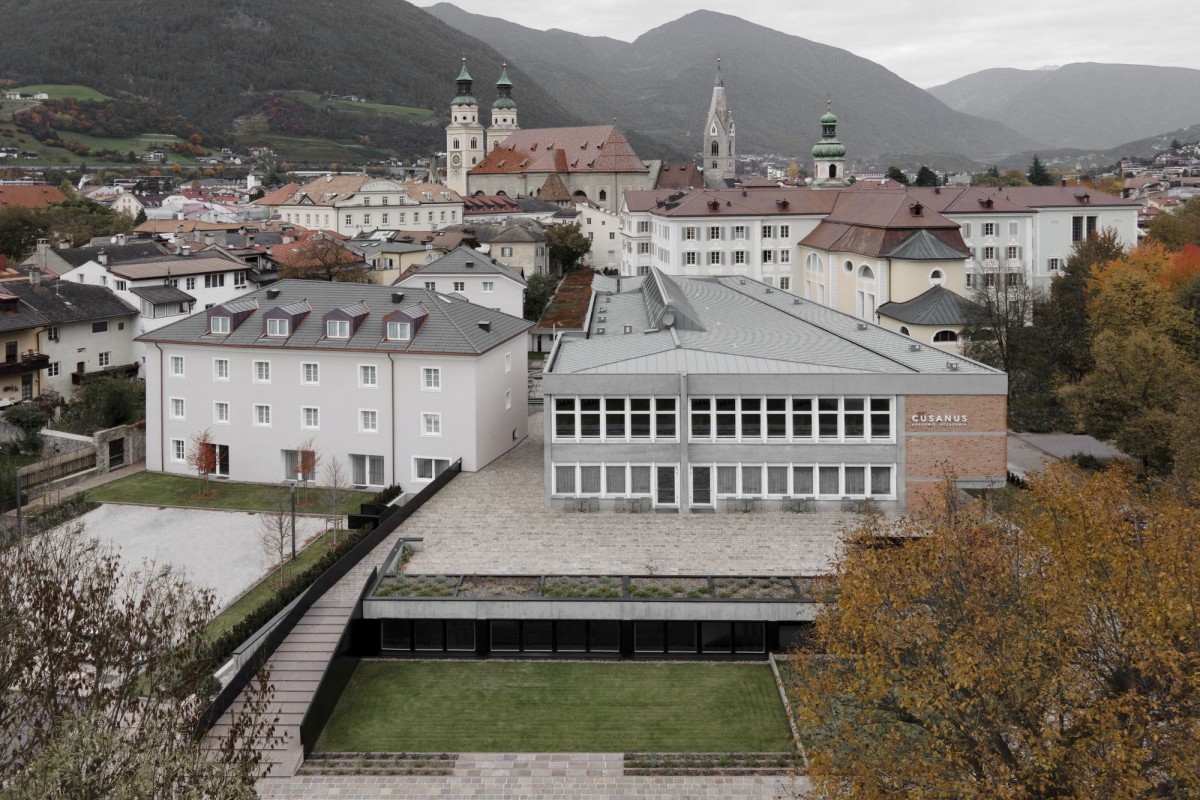 MoDusArchitects adopts a subtle design strategy for the renovation of, and addition to the Cusanus Academy, a center o learning dedicated to the exchange of ideas ate the intersection of the religious and secular worlds. For the purpose of better engaging the Academy with the city, the project tackles the heterogeneous ensemble of seminar venues and guest accommodations with a spectrum of interventions—mimetic to overtly new—that form a more organically connected complex that invites the community in.

Located along the Isarco river in the eastern part of the city, the Cusanus Academy comprises three buildings: Paul Norz Haus, Mühlhaus, and Haupthaus, or Main Building, originally designed by the locally renowned architect Othmar Barth 81927-2010)— the first modern building listed under the protection of the historic preservation commission of the Province of Bolzano. At the 1962 inauguration, the building triggered much debate: many considered the boldly modern building of exposed brick and concrete to be out of place, an eyesore to the adjacent 18t​ h century Major Seminary building, while others welcomed the contemporary addition within the medieval fabric of the historical city center. Today the building stands as one of Bressanone’s landmark buildings and is considered to be Othmar Barth’s masterpiece.

The Academy takes its name after Nikolaus Cusanus, a 15t​ h​ century, influential and enlightened cardinal and philosopher dedicated to Renaissance humanism whose various religious and political appointments led him to Rome where he came into contact with Leon Battista Alberti. The affinity between Cusanus’ and Alberti’s ideas of ​concinnitas ​(congruity of the various parts of a building) provide the beautiful backdrop to Barth’s architectural elaboration of ​part to whole relationships in the name of unity and harmony.

The architects were called upon to design a careful and balanced renovation that could absorb a host of technical and code related requirements without compromising the integrity of the Academy. More specifically, the need for greater accessibility prompted the architects to rethink the vertical and horizontal circulation as a network of social, more public spaces. The project traces a fine line between that which appears to belong to the original buildings (invisible) and that which emerges as new, more clearly stated interventions (visible). The two most significant and visible design moves occur at the ground level of the ​Haupthaus whereby a newly formed axis opens up the building, and at the lower level whereby a large conference hall becomes a new fulcrum.
_