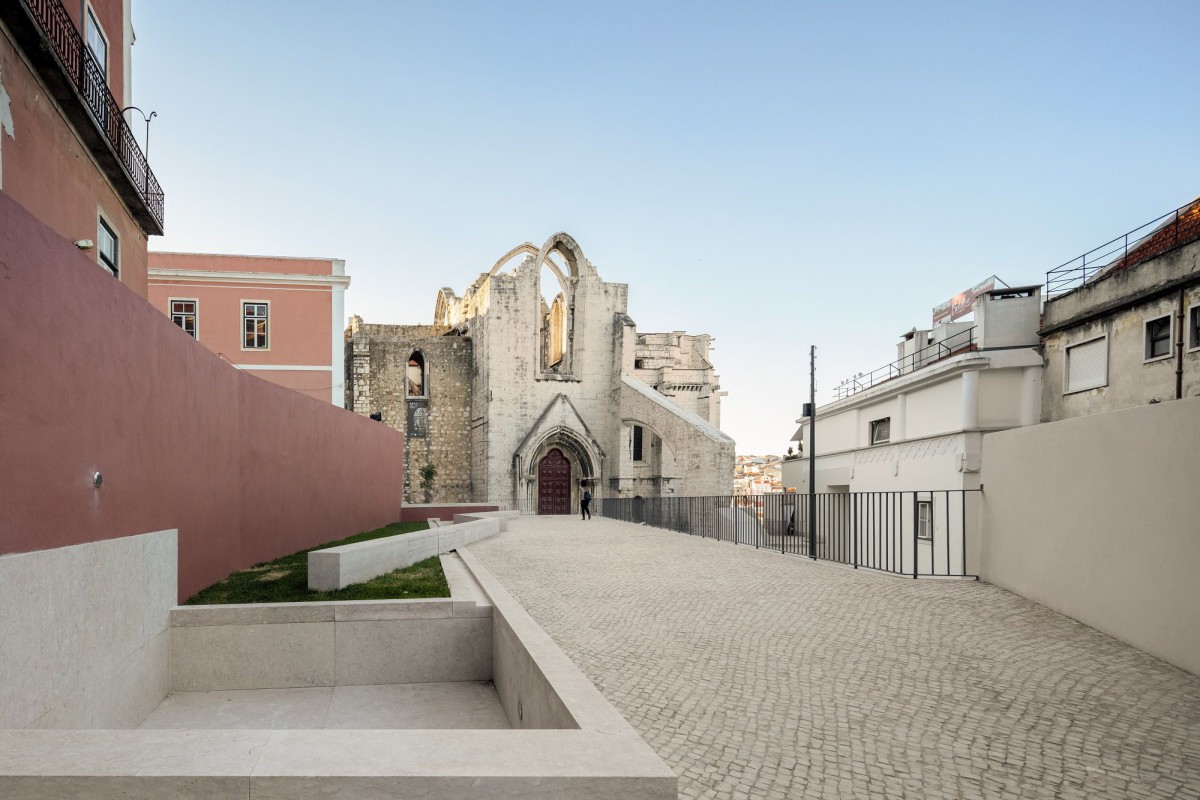 Álvaro Siza’s restoration project for the pedestrian routes connecting one of the courtyards of the Carmo Convent (Patio B), Largo do Carmo square, and the Carmo Terraces has been going on for over two decades. It seems that recovery plans only happen when there is a catastrophe. The restoration of the Chiado area, due to a fire in 1988, has been gradually implemented, and some buildings that were destroyed, and others that were left intact, still required renovation, like so many others outside the area.

The connection of Patio B to the ruins of Carmo Church, Largo do Carmo, and the Santa Justa Elevator was also unfinished. We have to complete the routes using urban logic, rebuilding what once existed, and renovating abandoned and forgotten spaces, or sloppy rear facades, that are also part of the city.

It has been twenty years since Álvaro Siza’s first invitation, and now he has returned to conclude this part of the Plan extending it to the Carmo Terraces, corresponding to the platforms of the Carmo Church and Convent, and the National Republican Guard (GNR) General Headquarters, which contain several poorly constructed houses and buildings.

Twenty years have passed and I find myself in Chiado looking for land levels, interpreting drawings, visiting what was done and what is still to come. The plan to connect Patio B to Largo do Carmo and the Carmo Terraces started with important agreements and protocols so we could proceed with the studies. Almost immediately, we felt the need to divide the work into two parts, one corresponding to the connection of Patio B to Largo do Carmo, and the other to the Carmo Terraces.

Now approved by all institutions, the plan does not differ much from the original idea defined in the layout plan for the recovery of the damaged area of Chiado. Adaptations were made as a result of new approaches and a better understanding of the current scenario.

The route remains the same and will provide access to Carmo Street and Garrett Street from Largo do Carmo using ramps, stairs, and also by a public elevator incorporated in the recovery of Edifício Leonel, a building that already offers access from and to the Santa Justa Elevator through a footbridge.

The area of intervention next to the building known as Palácio Valadares or Escola Veiga Beirão was enlarged, allowing new routes and creating more urban life.

Alongside the design work, the team of archaeologists and anthropologists would dig into the points that seemed crucial to us, checking and defining levels, pre-existing elements, confirming beliefs and interpretations.

The outcome was surprising, confirming many convictions but also requiring adjustments and adaptations. Further excavations and more studies will be necessary so that history completes the gaps, enhancing the city, and strengthening the plan. Following are the studies for the constructions, demolitions, and the second phase of this project, which is a complex of quests, challenges, and solutions.