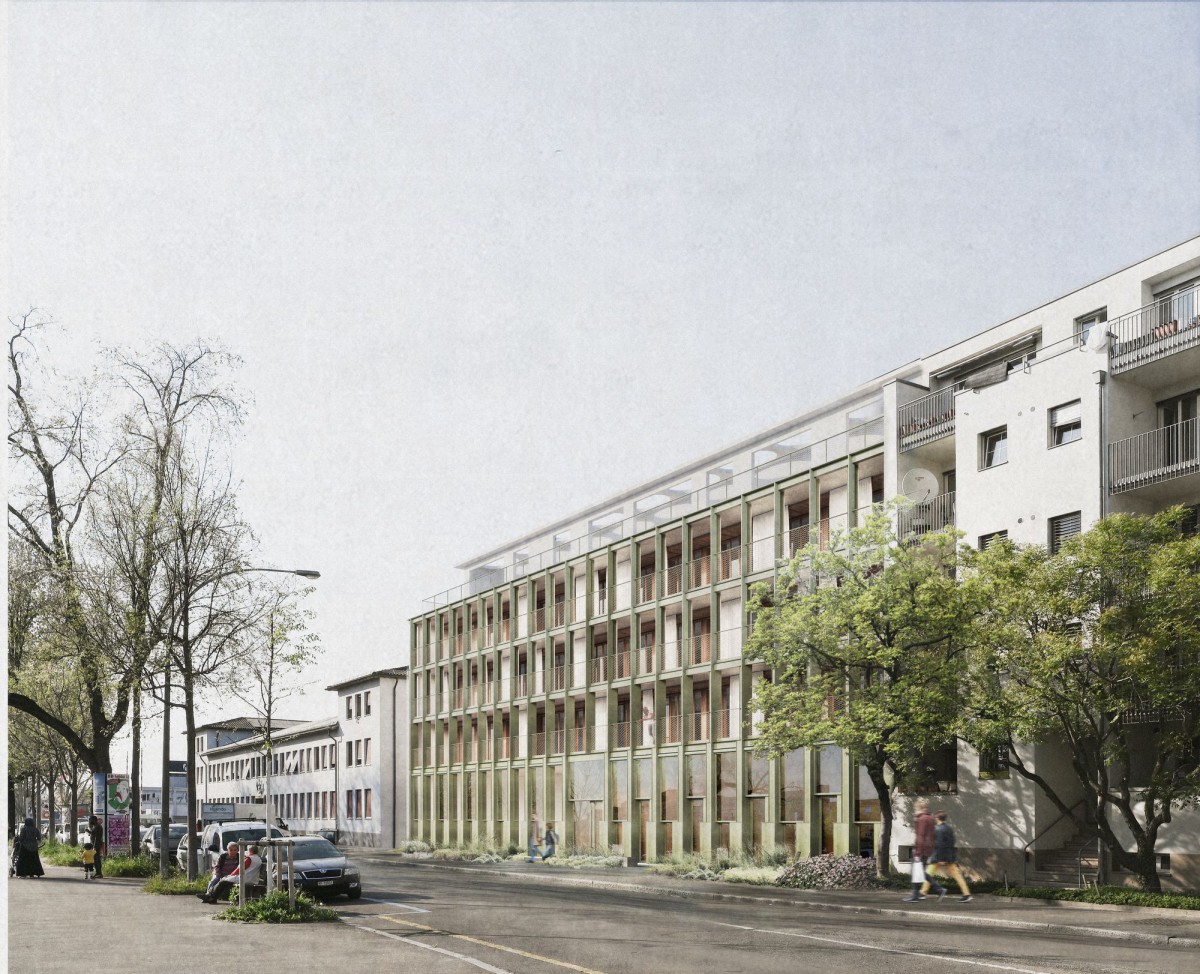 The building of the Office for Environment and Energy is located in an area characterized by very different and contrasting urban structures. The heavy industry and the large-scale port facilities along the Rhine form a heterogeneous composition of predominantly functional buildings without significant overall design features. Towards the Wiese lies a rather standard residential area with a homogeneous building mass, consisting mainly of apartment buildings of equal scale. On the north side, the old village centre of Kleinhüningen, with small and historic houses along fragments of picturesque streets, is brutally confined and cut off from the activities of the port industry along the Rhine in the west.

The design is based on the idea of an arcade along the street façade as the main communication axis, connecting all the flats like a ship deck, creating a common space for interaction and spontaneous encounters. The layering of different spatial boundaries creates a gradual filtering from the public space of the street and the common space of the arcade, through the living rooms and kitchens of the flats, to the most private bedrooms at the back, overlooking the quieter courtyard to the north.
The main community room, which extends over the 1st basement floor and the ground floor, offers a generous double height space with access directly from the street, the main entrance and the corridor leading to the studios. New openings in the base wall allow the room to be generously lit and create a link with the street. The space is characterized by the rough existing structure, which is left visible, and is extended with simply constructed stairs and platforms. The space can be accessed and crossed in many ways, thus creating great flexibility and interesting spatial relations. One could imagine that the room could be used for a wide variety of purposes, from house meetings and dinners to cinema, lectures and other public events.

Behind the community room there are four ateliers, which can be flexibly converted or used as an open coworking space. Due to their close connection with the community room, these rooms can also be included in a larger context with the common space, e.g. as temporary exhibition spaces.
There are four maisonette studio flats on the ground floor and the 1st basement. They are accessible directly from the street and they are connected to the workshop spaces in the back.

On the residential floors, the flats are accessed via an arcade on the south façade, which functions both as an outside space and entrance zone for the individual flats. This subdivision does not represent a physical boundary but is emphasized by the change of material between floor and ceiling, from concrete to wood. The kitchen and living space can be extended to this exterior space through an openable facade. The transparency through the flat, from south to north, is maximized by the use of glass partitions that filter light. However, the need for privacy is met by curtains creating visual boundaries. The bedroom on the north façade becomes a quiet room, illuminated by the soothing daylight from the north.

In order to protect the existing concrete structure and the insulation, the south façade is given a metal skin. This offers the building a robust and urban character towards the street space.

The existing concrete structure, which in many cases remains uncovered and creates a natural patina for the interiors, will be clad with a new and light wooden structure to meet the requirements of the new program. All new additions such as the façade, partitions and flat walls will be built from wood. Only where statically necessary, additions in concrete will be made.
_